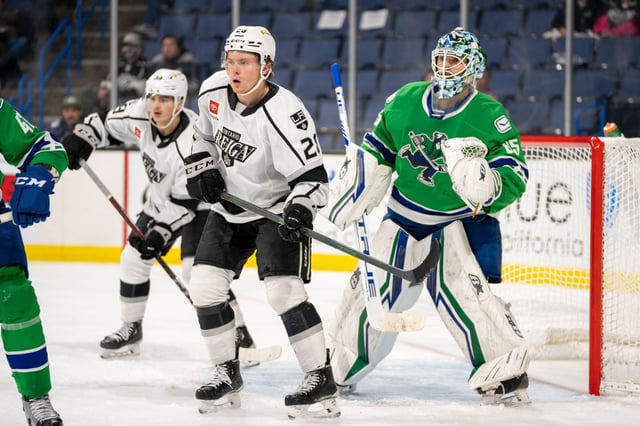 The Ontario Reign will look to snap their three-game losing streak as they take on the Abbotsford Canucks Sunday evening.

Tonight’s matchup will feature the Ontario Reign’s number one ranked power-play against the Abbotsford Canucks’ power-play that is ranked third in the league. Canucks forward Sheldon Dries leads the league with 15 power-play goals on the season and has made an impact in all seven games against the Reign this season. One way to stop Dries and the Canucks power-play is to stay out of the box because the Reign’s penalty kill is 27th in the league.

As for the Reign’s power-play, there have been multiple changes to the first unit over the last week. Martin Frk, Gabriel Vilardi, and Jordan Spence have all been called up to the Kings because of injuries to players on the roster. Helge Grans has seen time on the first unit during Spence’s absence. Let’s see if the power-play can look crisp with all the new changes.

As mentioned above, the Reign have had to go through some lineup shuffling the last week. The Reign are currently on a three-game losing streak including getting shutout by the San Diego Gulls last weekend. In their last game on Friday, the Reign got out to a 2-0 lead in the first period and looked like the better team but lost by a final score of 3-2 in the end. Acting head coach Chris Hajt said in his post-game that the last three minutes of the first period is where he felt the game turned.

All season long the Reign have prided themselves on getting off to good starts, generating offense, and closing out periods strong. Lately, that hasn’t been the case. Even with all the new faces being added to the lineup such as Nikita Pavlychev, Brett Kemp, Marcus McIvor, Kevin Lohan, and Loren Ulett, the Ontario Reign will have to find a way to get back to playing their style for a full 60 minutes. Tonight would be a good night to get back to that.

Samuel Fagemo has been a prospect that has made an impression on the player development staff. Being elevated to the first line on Friday, Fagemo registered his 20th goal of the season. In his last nine games, Fagemo has recorded five goals and five assists for ten points, and getting points in eight of those games. Not only has he been scoring, but he has also earned the trust of the coaching staff to kill penalties and be on the ice in critical moments of the game in the defensive zone. Until the regulars return back to the lineup, Fagemo’s role will be even bigger for the time being.

Tonight’s game is the final meeting vs the Abbotsford Canucks this season. The puck drops tonight at 5:00 pm PT at Toyota Arena and can be seen on AHLTV.