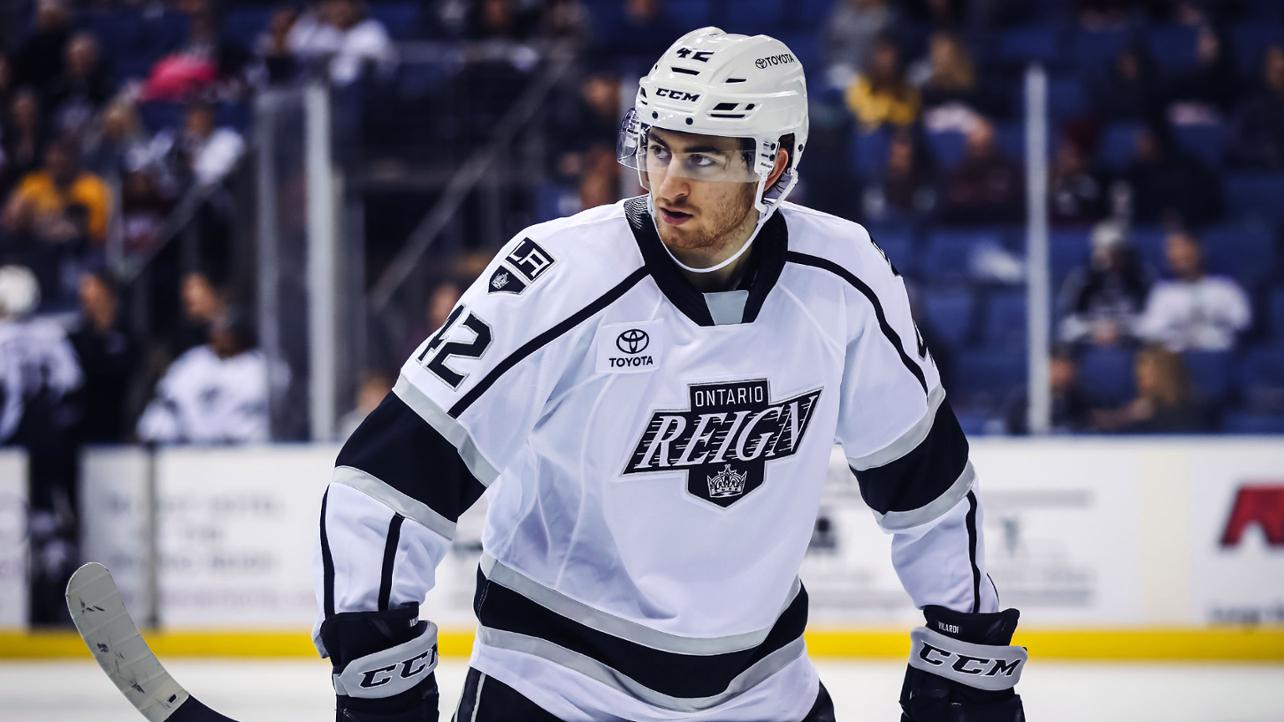 With the NHL trade deadline now less than a month away, the rumor mill is picking up plenty of steam. As far as the LA Kings are concerned, the expectation is they’ll at least be involved in these discussions. How far those will go could depend on where they find themselves in the standings over the next couple of weeks.

While the biggest name linked to the Kings is Arizona Coyotes defenseman Jakob Chychrun, there’s of course the annual speculation that LA could be in the market for a top-six winger as well. Though, I’m not sure the latter is going to be as much of a priority as a left-shot defenseman.

Regardless, in any deal that gets made, someone (or something) needs to go the other way. Here I’ll take a look at the four most likely candidates to be dealt that are currently playing for the Ontario Reign.

One name that has really heated up of late, courtesy of The Fourth Period’s Dennis Bernstein, is Gabriel Vilardi:

Things getting interesting in LA.

Sources telling us they're gearing up pursuit of Jakob Chychrun.

Vilardi has been a bit of an enigma during his time in the Los Angeles organization. He once was the can’t-miss, untouchable top-prospect unfortunately plagued by injury. His NHL career started with a bang, scoring on his first shot in his first shift. But injuries and inconsistent play would become the theme over the next two seasons.

After a productive pre-season, Vilardi began the 2021-22 campaign with the Kings as their third-line center. His leash was fairly short. The 22-year-old lasted just seven games – scoring one goal – before being sent down to Ontario.

This move was for a couple of reasons. First, his play at the NHL level was not consistent enough to warrant staying. At least not as a center. Which is the second reason for his move to the Reign, to play the wing.

In 30 games with Ontario, you could argue he’s been their best forward not named T.J. Tynan. Vilardi has 15 goals and 32 points – 13 of those (eight goals, five assists) have come on the power-play. He has been a consistent – at times dominant – source of production for the Reign. The Kingston, ON native, has not gone more than two games in a row without a point, and he’s only done that twice. Whether it’s been 5-on-5 or with the man advantage, he has been in the upper-echelon in points-per-game in the AHL (chart via QuantHockey):

It’s worth remembering, he played just 36 AHL games before being thrust into the second-line center role in the NHL as a 21-year-old. This extra time in Ontario has served him well. I have been of the opinion Vilardi is actually a perfect reason you do not need to acquire a forward at the deadline and that he’d be a top-six winger for the Kings by season’s end. One way that doesn’t happen is if he’s involved in a deal for Chychrun.

Vilardi’s trade value probably couldn’t have been much lower (relative to a couple of years ago) earlier this season. But his play in Ontario is surely opening some eyes.

The 2019 fifth overall pick has been a player that’s been a hot-button topic amongst Kings fans. Between some yelling at the organization for stunting his development by not having him in the NHL to the others that are resigned to the fact that he’s a bust, can’t we just let Alex Turcotte play hockey?

He is 20 years old. He’d played a whopping 32 games of professional hockey coming into this season and has had numerous injury situations dating back to his days at Wisconsin. The biggest thing Turcotte needed in the 2021-22 season wasn’t a call-up, it was a healthy season. Save for a brief stretch earlier this year where he missed a handful of games, he has largely been able to stay on the ice.

He did earn a call-up to the Kings just after Christmas. In the NHL, Turcotte played eight games but did not register a point. While he hasn’t established himself as a high-end point producer yet, his work ethic and two-way play have him as one of the more effective defensive forwards in Ontario. His 0.834 Defensive Point Shares is the best on the team (chart via Sean O’Brien):

We’re still not far enough removed for Turcotte’s value to have taken a big enough nose-dive despite his average production. That said, because of his production, his prospect grades are trending in the wrong direction:

We could be at the point where the Kings need to figure out what Alex Turcotte is and how that fits into their future. Is he a bonafide top-six forward or more of a middle-six, two-way NHLer? Both of those will play, but the former likely fetches more in a trade. If a team (say, in Arizona) has that view of him, this could be the time to pull the trigger.

Selected in the fourth round of the 2019 draft, Jordan Spence‘s stock is only rising:

He has burst onto the scene in his first year as a pro. In 39 games, Spence has two goals and 31 assists. 21 of those 33 points have come on the power-play where he has picked up right where Sean Durzi left off.

The 20-year-old is tied for first among AHL defensemen in assists, second in points, and is 2nd among all AHL rookies in assists. Spence put together a 13-game point streak (two goals, 16 assists) from January 2nd to February 4th. He’s picked up five points in the five games since that streak ended.

Why would the Kings want to trade a young, smooth-skating, puck-moving defenseman who should get consideration for AHL Rookie of the Year? Well, I’m sure they don’t. But the strength of the LA organization is right-shot defensemen. With Drew Doughty, Durzi, Matt Roy, and the injured Sean Walker all in Los Angeles, Spence is one of two highly regarded right-shot D prospects in Ontario (Helge Grans being the other). Not to mention US Olympian Brock Faber in Minnesota and last year’s 8th overall pick, Brandt Clarke, who just so happens to be leading all OHL defensemen in points.

It would be quite surprising to see the Kings move Clarke. With this many options on the right side of the blueline, it stands to reason one of them could very well be a piece in a trade. Spence’s rookie season performance to date just might have catapulted his name up to the top of that list.

At just 19 years old, Grans has been learning on the go at the professional level.

In 36 games, the right-shot Swede has five goals and 15 points. As someone who was known as a raw prospect coming overseas, he’s come a long way already. In last summer’s rookie camp, while he showed flashes of what was in his toolbox, he looked very much like a player that would take time and be more of a project. Something you’d expect from a 19-year-old making his debut in North America.

He has played in all situations, though most of his time on the power-play has come when Jacob Moverare and Christian Wolanin were with the Kings. The 6’3″ defenseman has adapted well to the pace of the AHL game and the smaller ice surface. 13 of his 15 points have come at even strength – that’s more than Spence.

One of the reasons for how effective he is at even strength is how well he reads the play in the offensive zone. Here is a great example of him making a pass to his D partner, but then continuing to move to space to make himself an outlet:

Here's how Helge Grans scored his 3rd goal of the season! pic.twitter.com/0U2JZhFIVe

In the fall, Grans was selected to Sweden’s world junior team. In two games before the tournament was canceled, he picked up three assists. He was also asked to man the top power-play unit.

Like Spence, the only reason Grans is on this list is the team’s depth on the right side.