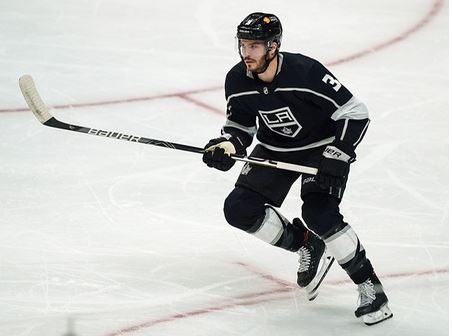 The LA Kings have had their share of player movement this season, particularly among the defensive corps. With Sean Walker suffering a season-ending injury, Drew Doughty missing time earlier in the season, and Alex Edler likely out for the remainder of the year, there has been a lot of lineup shuffling on the blueline.

We’ve seen the likes of Sean Durzi and Jacob Moverare make their NHL debuts, Christian Wolanin being waived only to be reclaimed and called upon to step in, as well as Kale Clague and Austin Strand earlier in the year.

One of the stalwarts on the back-end though has been 26-year-old right-shot defenseman, Matt Roy.

Drafted in the seventh round of the 2017 NHL Entry Draft by the Kings, it’s fair to suggest that expectations weren’t necessarily high for the Canton, MI, native. However, he has developed into one of the more steady, under-the-radar-effective defensemen in the organization.

Perhaps a reason he isn’t often talked about among Kings defensemen is that he isn’t exactly known for his offense. But that doesn’t mean he hasn’t contributed to the offense. Would you believe it if I told you he leads all Kings players in Primary Assists?

Of those 13 primary assists, seven of those have come at 5-on-5. That is the fifth-most and ranks him in a tie for 14th among NHL defensemen who have played at least 300 minutes — the same amount as highly-skilled offensive defensemen Quinn Hughes and John Klingberg, and one more than perennial Norris Trophy candidate Victor Hedman.

Despite not having any goals yet this season, Roy leads all Kings defensemen in Expected Goals (xG) at 5-on-5 and is also tops in xG/60 at 5-on-5 (per MoneyPuck).

Roy is among the better possession players on the LA blueline, and that is where his value is seen the most:

It hasn’t been just this season, though, where he’s been a strong puck-possession player. Here’s a snapshot of his last three seasons (the table above and below via EvolvingHockey):

Last year, he talked about being known as “steady and reliable” with former King and current color commentator Jim Fox:

With the constant ins and outs of the lineup, head coach Todd McLellan can confidently pencil a player like Roy into the lineup on a night-in, night-out basis.

That reliable play didn’t come right away, though. During McLellan’s first year with the Kings, he let Roy know early on how he felt things were going:

“We had a heart-to-heart. … I was pretty straightforward.”

Most of Roy’s 5-on-5 time has been spent with Olli Maatta, though he was often paired with Edler as well before his injury and those two were outstanding together. The table below (per Natural Stat Trick) also shows his numbers while paired with Tobias Bjornfot, whom he started the season with before the injuries on the back-end. It hasn’t mattered who he’s paired with, though, as the Michigan Tech alum’s possession numbers range from good to excellent.

The only partner he hasn’t been a net-positive in the xG department is Maatta and, well, it is probably a good time to mention that virtually all of his numbers are better away from Maatta. You can read into that what you will.

Still just 26, he’s established himself as a legitimate NHL defenseman with his ability to not just defend, but also be an effective puck-mover in transition.

As has been talked about, LA is very rich in right-shot defense prospects. Not to mention, Drew Doughty isn’t showing any signs of slowing and Durzi has been very good on the offensive side of the puck since he’s been up with the Kings. It could seem that Roy would be in danger of losing his spot with the likes of Brandt Clarke, Brock Faber, Helge Grans, and Jordan Spence making a lot of noise behind him, but I wouldn’t be so sure. He just inked a three-year deal back in March and McLellan had this to say about him:

“As far as his extension, he deserves every little bit of it,” McLellan said. “We have a ton of confidence in him.”

The impressive thing about Roy to me is how strong he is at 5-on-5. It’s no accident that he leads the team in primary assists without being someone who plays on the power-play. For someone who isn’t known for his offense, that speaks to how well he sees the ice and moves the puck.

At the very least, Roy provides a perfect bridge to the exciting prospects that follow. But I wouldn’t be surprised if he carves out a role with the LA Kings’ franchise beyond his current three-year contract.