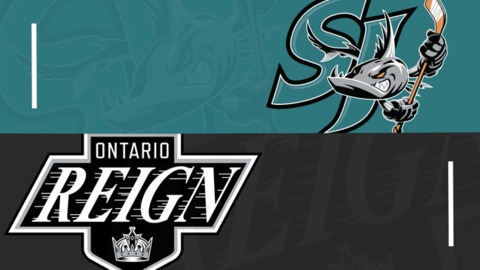 Fresh off of back-to-back wins, the Ontario Reign plays the first of two in San Jose on Wednesday against the Barracuda.

It was an offensive outburst over the weekend at Toyota Arena with the Reign picking up 7-3 and 6-5 wins over the Roadrunners, led by four goals and seven points from Martin Frk in his return to Ontario.

This will be the second meeting of the season against San Jose, the first of which also saw its share of goals with Ontario winning 7-4.

Here are three things to watch for on Wednesday:

The LA Kings announced on Tuesday a slew of transactions that could send some key players back to Ontario. Among those that were loaned to the Reign, Alex Turcotte, Samuel Fagemo, Christian Wolanin, and Matt Villalta all could be available on Wednesday.

Villalta has been great of late for Ontario going 2-0-1 with a .946 save percentage. Jacob Ingham, who was loaned to the Taxi Squad, played the last two games for the Reign, he went 2-0 but with only a .869 save percentage.

Wolanin would likely slot in for Jacob Moverare, who was also loaned to the Taxi Squad.

The most notable of the changes, though, would be top forward prospects Turcotte and Fagemo. Neither of them established much of a role in their brief time in Los Angeles, but have been staples in the Reign’s top-six.

While the Reign is just five points back (with three games in hand) on division-leading Stockton, the Barracuda is at the bottom of not just the Pacific Division, but the entire AHL. Among the reasons for their struggles is the amount of goals they’ve given up. San Jose is 31st in the AHL in goals allowed per game while boasting the only penalty kill in the league that is worse than Ontario’s.

As you’d expect, the goaltending has not been good. They have a team save percentage of just .872, but, this is in part because they are among the most tested-goaltenders in the league (via Sean O’Brien tableau):

A friendly reminder: this game will take place at 10 a.m. PT on Wednesday. It’s not often you get a chance to enjoy the play of Tynan, Frk, and Co. with your morning coffee. So, call in sick, pull up the AHLTV stream at work, shut the office door – whatever you have to do (that won’t get you fired) to make sure you can watch, do it!