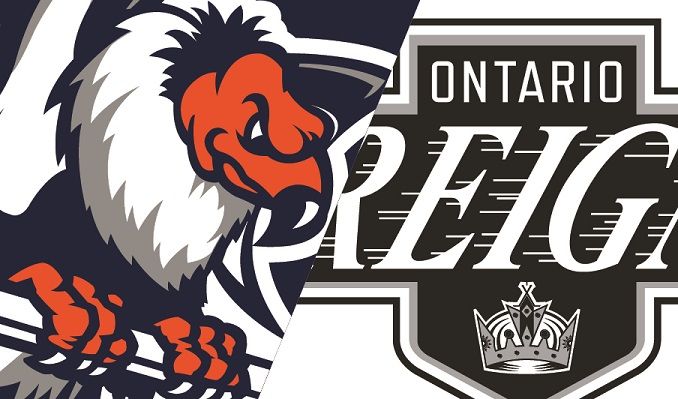 After ten straight days without a game, the Ontario Reign is back in action on Wednesday in Bakersfield against the Condors.

It isn’t just the NHL that has been affected by COVID, the AHL has seen several postponements as well, including the last two Ontario Reign games originally scheduled in Henderson and San Diego. Ontario hasn’t played since Saturday, December 18th.

On Wednesday, the Reign will resume play in Bakersfield against a Condors team who also has been off for quite a while, having played their last game on Friday, December 17th.

Here are three things to watch for on Wednesday:

Such is life during this pandemic, the Reign has seen a slew of players get called up to Los Angeles as the Taxi Squads are back in the NHL.

Alex Turcotte made his NHL debut in LA’s loss against the Vegas Golden Knights on Tuesday. Jaret Anderson-Dolan also played in that game. Martin Frk and Jacob Moverare joined Turcotte on the Taxi Squad and are not on the Reign roster.

When the Reign were last in action, Quinton Byfield was with them. He was also called up to Los Angeles last Monday but has been in COVID protocol. We may have seen the last of the Kings’ top-prospect in an Ontario uniform.

The Reign did make one addition in calling up Nikita Pavlychev from the ECHL. The 6-foot-7 forward was signed over the summer and has 11 points in 14 games with the Greenville Swamp Rabbits.

With all of the transactions above, we will inevitably see some players with increased roles, particularly down the middle.

Turcotte, Byfield, and Anderson-Dolan have all played the center position almost exclusively this season. That leaves just Tynan and Brett Sutter as the regular centers for Wednesday.

Akil Thomas has been in and out of the lineup due to injury since his return, but he should man the second-center slot if he is healthy.

Pavlychev is an option slot in as a center, and Adam Johnson has also played the position at times this season, but with the team still light on defensemen, he could be tasked to handle those duties again.

With a lot of firepower out of the Reign lineup, we could see a low-scoring game on Wednesday. Not to mention, Bakersfield has scored the fewest goals in the AHL and has also given up the fifth-fewest.

Ontario is 3-0 against the Condors this season; two of those wins were 3-2, the most recent in a shootout. In that game, there were just 88 total shot attempts, the third-lowest of the season for the Reign. It’s the type of game Bakersfield will try to play, and with many changes to the Ontario lineup, we could see another low-event game.