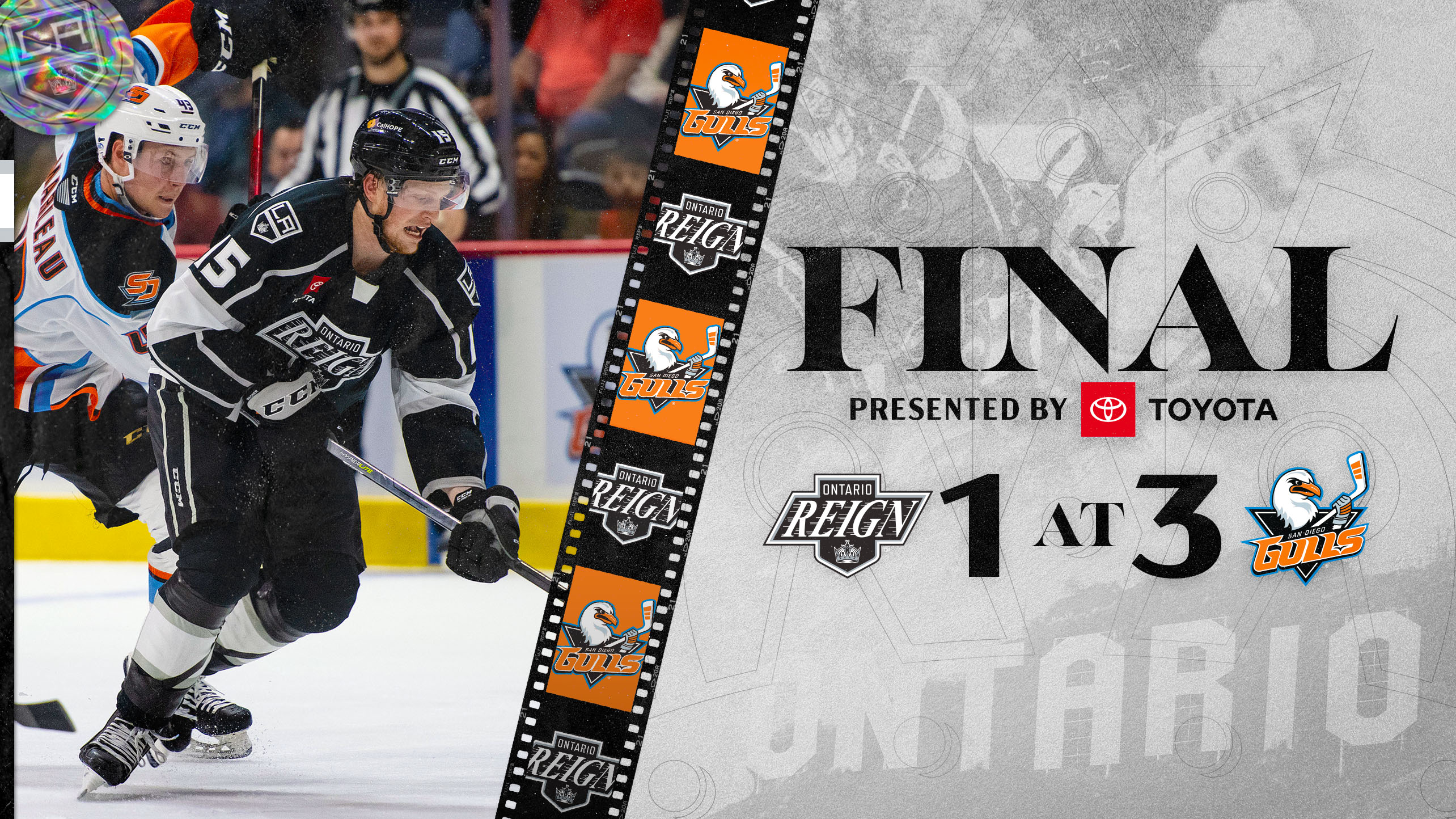 In the fourth meeting of the season between the Ontario Reign and San Diego Gulls, it was the hosts that picked up the win.

The Ontario Reign won the first three meetings – all at home – between the two teams but in this first one in San Diego, the Gulls were able to walk away with two points, winning 3-1.

In what was a very strong first period for the Reign, they went to the locker room trailing 1-0. Despite out-shooting the Gulls 11-4 and out-attempting them 19-6 in the opening 20 minutes, they were unable to put anything past Olle Eriksson Ek. Things got a little bit sloppy in the closing minutes, with the Reign allowing 2-on-1 breaks on back-to-back shifts. Jordan Spence was able to break up the first one, but the second one Brayden Tracey rifled home.

Goals by Hunter Drew and Brogan Rafferty put the Gulls up 3-0 in what was a lackluster second period for Ontario. The Reign managed just four shots on goal in the period.

Helge Grans would provide the visitors with some life, chipping in a rebound goal late in the middle frame:

Here's how Helge Grans scored his 3rd goal of the season! pic.twitter.com/0U2JZhFIVe

The Reign outshot San Diego 12-2 in the third period but couldn’t put anything past Eriksson Ek.

The Gulls netminder made 26 saves for the win. Garret Sparks stopped 11 of 14 that came his way for Ontario.

Here are three things that stood out against San Diego:

1. Vilardi back at center

With Akil Thomas unavailable for the game due to a presumed injury, that meant Gabriel Vilardi shifted over to the middle for the first time this season with the Reign.

To me, this was the least effective he’s been since joining Ontario. In his defense, there didn’t seem to be as much jump from a lot of the team in general in this game.

Vilardi managed two shots on goal – but both of those came late in the third period from the left circle on the power play. At 5-on-5, he was not much of a factor.

All that said, this does seem like a temporary position change. He’s been at the wing since being with the Reign, and the injury situation has forced the team’s hand in putting him back in the middle. I maintain he’s got the tools to be a very good scoring winger at the NHL level, and he’s shown that with Ontario.

We do not know the extent of Thomas’ injury or how long he will be out.

2. The Reign deserved a better fate

I’d mentioned above that there were points in this game – particularly the second period – where there wasn’t a whole lot of jump. But even with that, they controlled the shot-attempt battle and were in complete control of the game up until the first San Diego goal, which seemed to take a little bit of wind out of the sails heading into the second period.

Credit to Eriksson Ek, he was strong when he needed to be early in the first and late in the third. There were a number of second-chance opportunities for the Reign but other than the Grans goal were unable to get anything to go.

With injuries already to the aforementioned Thomas and Alex Turcotte, two more forwards left the game against San Diego in Austin Wagner and Tyler Madden – both in the third period.

Just over seven minutes into the third, Wagner was tied up along the boards before taking a dangerous high hit from Jack Badini that Wagner did not see coming. The winger did leave the game under his own power, but he took a while to get up and left with the trainer.

Madden was on the ice with less than three minutes to go in the game with the goalie pulled but appeared to be hit up high by Greg Pateryn as the two went for a loose puck. Madden stayed down for a while as play continued and eventually was able to get to the bench on his own, but he was certainly laboring.

Neither returned to the game.

That is now five forwards that are at least potentially out due to injury for the Reign, as I didn’t even mention Johan Sodergran, who hasn’t played since October 30th when he took a big hit and left that game early.

With six days off before their next game, the Reign will have some time to see how these all shake out.

The Reign are off until Friday, December 17th, when they host the San Jose Barracuda.