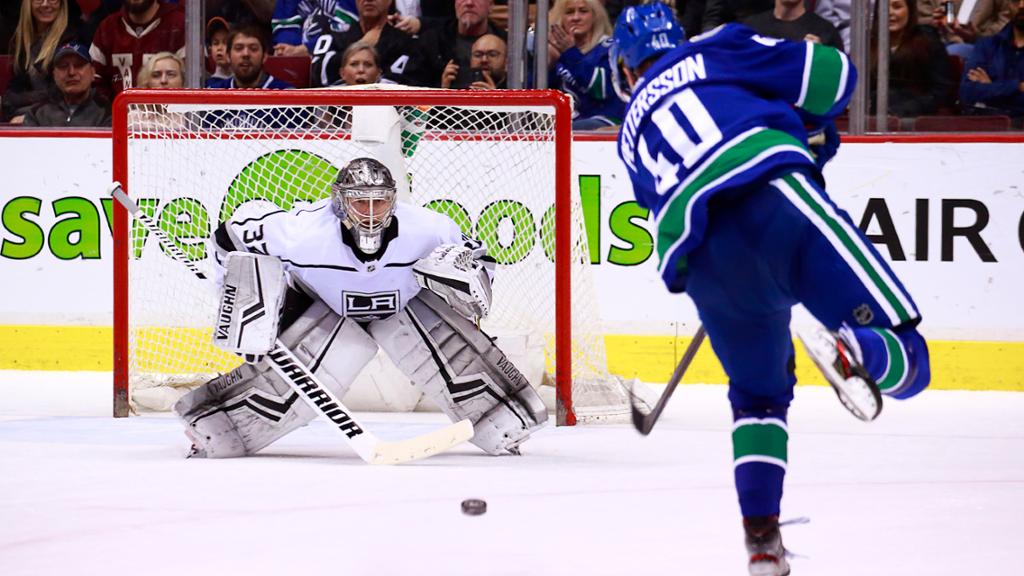 The LA Kings (10-9-4) visit the struggling Vancouver Canucks (8-15-2) to wrap up their two-game road trip of western Canada. The Canucks are coming off a crazy night before, while the Kings are coming off of a 5-1 win against the 9th place Edmonton Oilers.

Here’s a look at three things to watch in tonight’s contest:

1. Big changes from the opponents.

The night before the game, the Vancouver Canucks cleaned their house. They fired head coach Travis Green, general manager Jim Benning, and other former members of the organization. The players have been silently protesting against the former coaches and the general manager by liking their memes on social media.

The Canucks have yet to find a full-time replacement for Jim Benning, while they have found a permanent head coach in Bruce Boudreau. Boudreau, a highly respected NHL coach, will look to have his struggling team turned around in hopes of creating a winning environment in Vancouver.

Hearing tonight that Bruce Boudreau will be the next coach of the Vancouver Canucks.

What does this mean for the LA Kings? Well, it means that you cannot underestimate the Canucks on Monday. The players and the fans will be fired up from the changes, and they’ll put up a real fight.

With Boudreau’s squad, you can expect a physical yet very defensive game. The Kings managed to shut down the Oilers in perfect defensive shutdown style and must continue the same pace against the Canucks.

We must expect a different Canucks team than the one we’ve seen all year, so the only way the Kings can figure out the new team is by playing the game and learning along the way.

2. The powerplay needs to continue to perform

On Sunday night in Edmonton, the LA Kings scored 3 of their 5 goals on the powerplay thanks to an awful hit by Connor McDavid.

Granted, it was a five-minute powerplay, and the LA Kings did slip up on a few moments during the powerplay and went 3 out of 5 on it. But they do have to take advantage of the worst penalty killers in the league.

The Canucks are last in the league in penalty killing at 64.6%, which is abysmal. Again, the Canucks have a new coach in place as well as a new defensive coach, but with a team struggling that much, it’s important to generate on the powerplay. The Kings haven’t been perfect on the powerplay this year. In fact, they’ve been very inconsistent, but they must use every PP to their advantage against Vancouver.

Getting onto the powerplay may be a little bit more difficult, though, as the Canucks are one of the more disciplined teams in the league. They do break at some points, for example, on Saturday against the Pittsburgh Penguins when they had three players in the box and let up three powerplay goals. The Kings have to shoot the puck a lot in this one, but shot volume hasn’t been a problem all year.

After their 5-1 dominant victory against McDavid and the Edmonton Oilers, the LA Kings will surely play with a little more confidence and a chip on their shoulder. When a team battling for a playoff spot beats a top-notch team, it always gives the fans and players a lot of hope. It makes you feel like there is a real chance at success, and it always gets your blood boiling.

Going into Vancouver, the Kings may be physically tired from the win the night before, but mentally, they’ll be good to go. As mentioned earlier, the players on the Canucks will also be coming to the game with confidence, but since LA just beat the Oilers in a dominant fashion, they’ll feel like the Kings of the world.

The powerplay will look to score again thanks to the three goals scored against Edmonton, and the rest of the team will be hungry to score some goals. Both teams will be competitive and confident for their own reasons, but the Kings may have the upper hand after winning big against the two best players in the National Hockey League.

Puck drop is set for 7:00 pm PT at Rogers Arena in Vancouver, Canada.