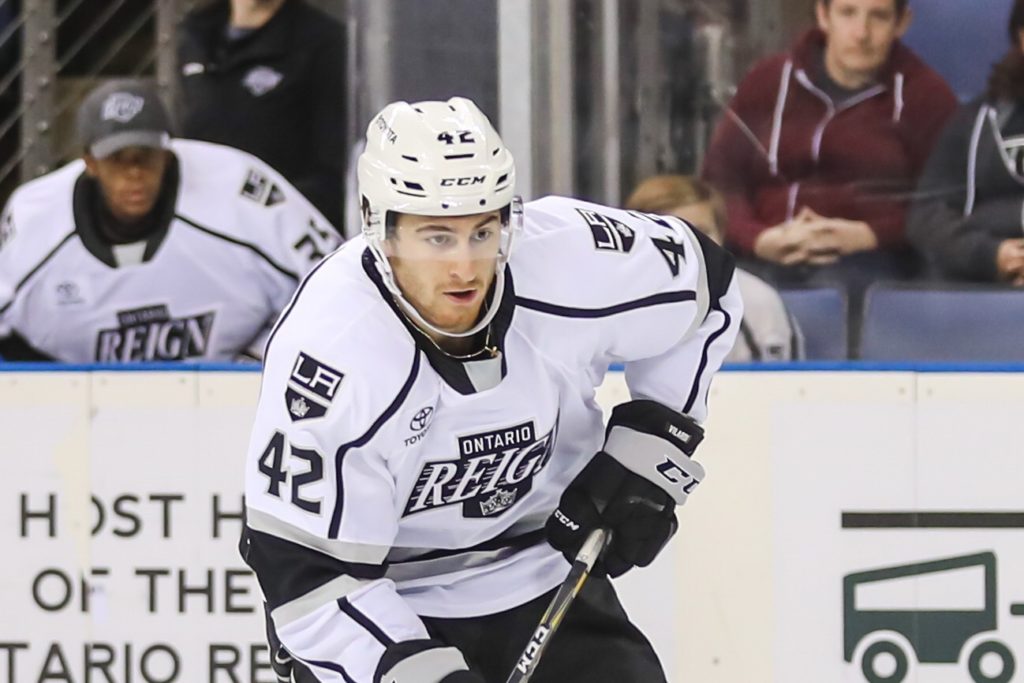 The first meeting between the two Pacific Division powerhouses goes to Stockton as the Heat dropped the Ontario Reign 4-2.

In their first game in eight days, the Ontario Reign fell to the Stockton Heat 4-2. The two teams entered the game atop the Western Conference in points, and while they still are the top two teams, they’ve traded places with the Heat improving to 10-0-2, 22 points leapfrogging Ontario’s 10-2-0-1, 21 points.

Rookie goaltender Dustin Wolf was very good in this one, stopping 31 of 33 shots en route to his sixth win of the season.

Garret Sparks was strong in net as well, making 28 saves on 31 shots in his second consecutive start.

With some player movement up and down the organization over the past week, here’s how the Reign lined up:

Ontario is set to take the ice!

Gabriel Vilardi didn’t waste too much time getting reacclimated to the AHL, he showed off his great hands in tight to give Ontario the 1-0 lead in the first period:

The Heat would answer back less than two minutes later on a Jakob Pelletier shot:

The first period ended 1-1 and was a pretty evenly played period overall, with the visitors holding a slight edge in shots (11-10) and a slightly wider edge in shot attempts (19-14).

Ontario struggled on the power-play in the opening 20 minutes. They had three power-plays, including a late 5-on-3 but were unable to capitalize and really didn’t generate many great scoring chances.

Special Teams would play a big role in the second period, and unfortunately for the Reign, it was the visitors who would do most of the damage.

Just before the midway part of the second, Adam Ruzicka took advantage of a scramble in front and put home a loose puck into an open net before Sparks could recover. It was the first of two power-play goals of the period for the Heat:

Nearly five minutes later, again on the power-play, Stockton caught the Reign penalty-kill sleeping and sprung Pelletier on a breakaway. Sparks was able to make the save on him, but Byron Froese would put home the follow-up chance to give the Heat a two-goal lead:

On their fifth opportunity, the Reign would finally score a power-play goal. Helge Grans‘ shot from the point was initially thought to be tipped in by Samuel Fagemo, but the Swedish defenseman would ultimately get credit:

Fagemo(7) scores on the powerplay late in the 2nd period. #Reign trail 3-2

Ontario put plenty of pressure on Stockton in the third period, outshooting them 12-8 and out-attempting the visitors 19-12. Still, Stockton did a good job of keeping most of those attempts to the outside as only five of those 19 attempts were inside the dots.

Luke Phillip added an empty-net goal on a clearing attempt to ice things for the Heat.

Ontario held the slight edge at 5-on-5, but Stockton the rest: