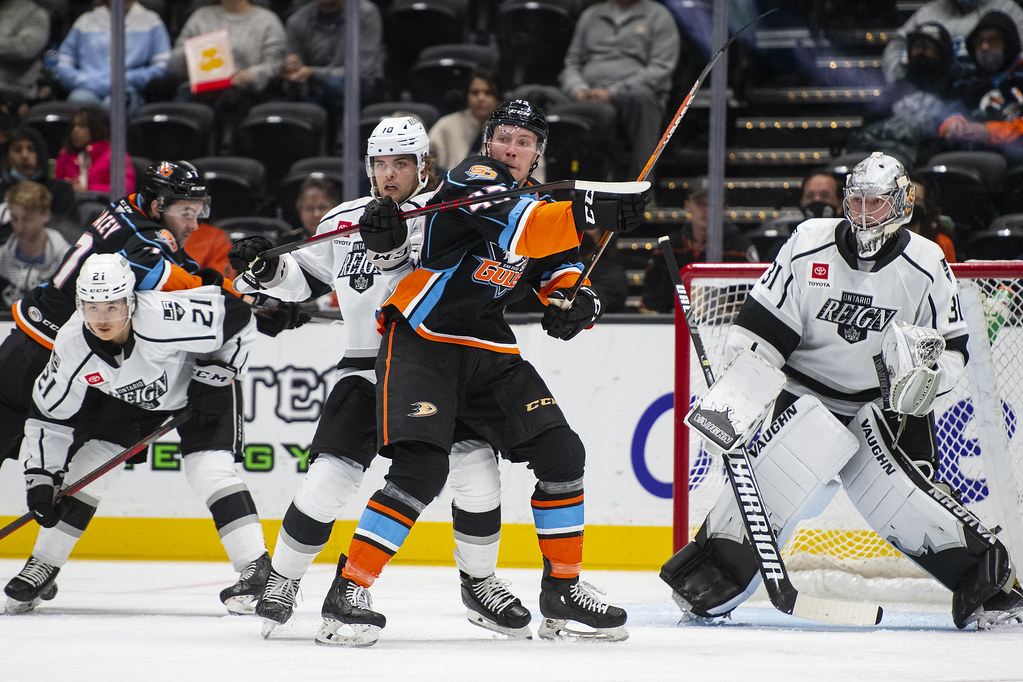 On Monday night, the Ontario Reign dropped their final preseason game 5-2 to the San Diego Gulls. Sutter and Sodergran scored in the loss.

In the final preseason game, the Ontario Reign fell to the San Diego Gulls 5-2.

As expected, it was a different lineup than we saw in the first preseason game:

Here’s how the @ontarioreign lineup is expected to look tonight:

The Reign had jumped out to a fast start, controlling much of the play early in the first period, but it was San Diego who struck first.  An unlucky bounce off of Helge Grans led to a bit of a broken play. Alex Limoges was left alone in front to give the Gulls the 1-0 lead:

The lead was short-lived as Brett Sutter tied things up for Ontario, darting through the center of the San Diego zone:

Brogan Rafferty put the Gulls back ahead with a nice play through the neutral zone before splitting the Reign defense:

With the Reign on the power play, Vinni Lettieri took advantage of a misplay in the neutral zone, beating Sparks on a pretty move to the backhand for the short-handed goal:

Ingredients for a filthy shorthanded goal:

Matt Villalta took over in net at the start of the 2nd period, and he made a point-blank glove save to keep the score at 3-1:

The score would stay 3-1 until Nikita Pavlychev made a nice play down the left wing before dishing the puck in front to Johan Sodergran, who pulled the Reign within one:

Ontario again controlled much of the play at 5-on-5 in the second period, out-attempting the Gulls 13-7. Thanks to some special teams, San Diego outshot the Reign 10-9.

In the third, after some pressure put on by the Reign, the Gulls would regain their two-goal lead with a Bryce Kindopp goal that beat Villalta up high after a deflection:

Good shot (and a little help from our friends) puts us up by ✌@kindoppian | #LetsGoGulls pic.twitter.com/W2ABuo6Tfj

San Diego would add an empty netter to close it out.

The full box score is here.

The Reign begin their regular season on Saturday night against the Gulls, 9 pm PT from Toyota Center in Ontario.