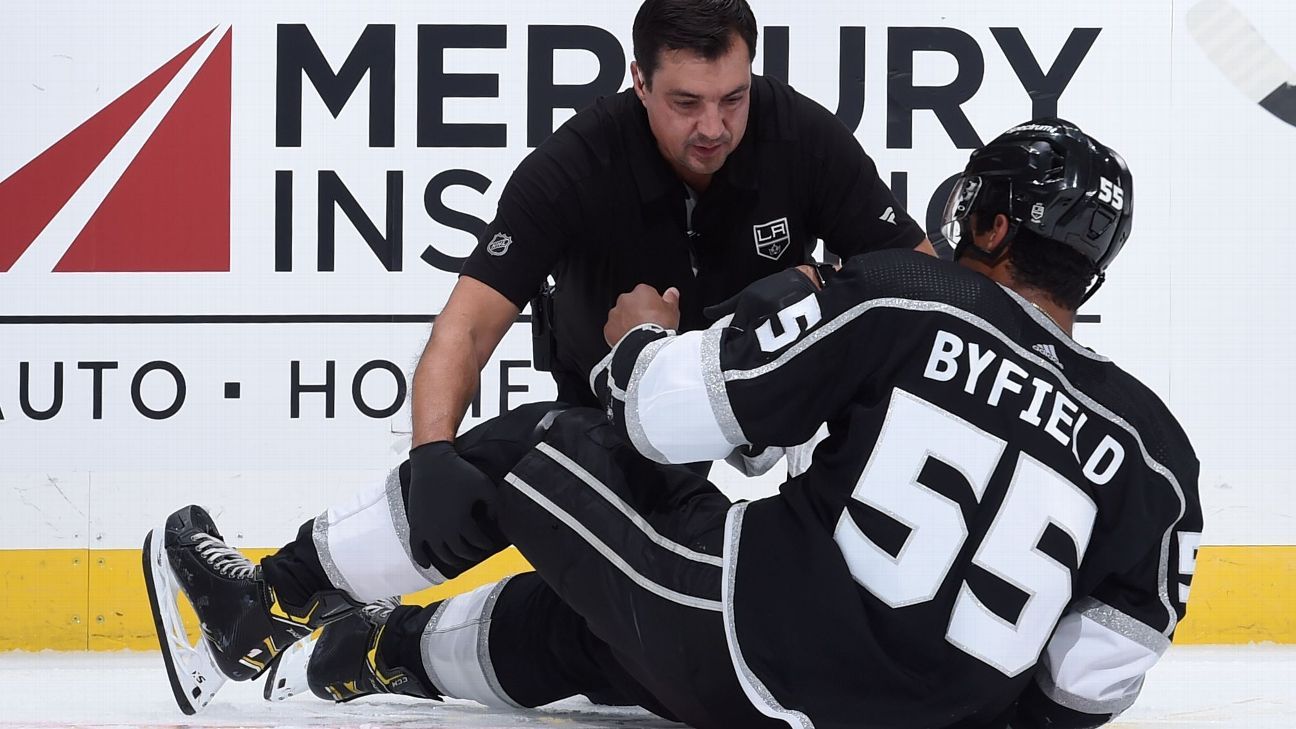 It’s always a tricky aspect of the preseason. NHL players are toeing the line of becoming physically ready for the regular season while staying healthy. Sometimes, when placed in any game setting, with fans watching and battles for spots induced, those players will go all out. And unfortunately for the LA Kings, those situations have led to several injuries.

Andreas Athanasiou has been out since the first week of camp with an undisclosed injury. Olli Maatta was injured during a game in Las Vegas. Even though he has begun skating, he might be destined for a start on injured reserve. And in the preseason finale against Anaheim on Saturday, Lias Andersson was forced out of the game with a lower-body injury. We’ll wait to hear more on Lias’ status Monday from Todd McLellan when LA returns to practice.

However, perhaps the most devastating injury was to prized prospect Quinton Byfield. In the October 5th tilt against the Arizona Coyotes, Byfield suffered a left ankle fracture going hard into the corner boards off a hit from Coyotes forward Christian Fischer. Todd McLellan mentioned postgame that it was just an “unfortunate” play and didn’t see anything malicious about it. He has been ruled out indefinitely. It’s a tough loss for the young player who was in the middle of his best game in an NHL uniform. If precedent continues, look to see Quinton back with the Kings sometime in late November.

The chemistry created by Gabriel Vilardi and Lias Andersson toward the end of last season has carried over into the start of the 2021-2022 year. And now, with the addition of the exciting playmaking abilities of Vladimir Tkachev, a solid scoring trio has materialized. In 47:34 of time on ice together during the preseason, they have 54.80 xGF%.

Tkachev has been better than advertised so far. Coming over from the KHL, his ability to navigate seamlessly through crowded neutral zones, thread needles on the power play, and his underrated shooting ability have carried over from Russia. McLellan has done his best getting Vladimir ready for the pace of the NHL, inserting him into the lineup in the final six games of the dress rehearsals. Counting his time with the Oilers in 2014, he now has seven points in nine total games.

We’ll wait to see the status of Lias Andersson when the LA Kings return to practice on Monday. For LA’s sake, they’ll hope he is back for Thursday’s opener since that line has been the best for the Kings so far.

LA Kings fans finally got their chance to see the offseason additions of Phillip Danault, Viktor Arvidsson, and Alex Edler. Coming into training camp, Viktor Arvidsson was more than likely to be a top-six winger, but who at his center was unknown. Danault was penned as the number two center behind Anze Kopitar, but who played alongside him was a question mark. And Alex Edler was bound for a spot on the left side. But who would be his partner?

Viktor Arvidsson has found himself supplanted on the left side of the first line alongside Anze Kopitar and Dustin Brown. While it seems to be a match made in heaven with Arvidsson’s shoot-first mentality and Anze’s playmaking ability, there have been more downs than ups.

The line has been a work in progress, but we are starting to see some improvement. Even though they have yet to yield a presence on the box score, I fully expect the trio to come together and begin to put the biscuit in the basket.

Phillip Danault’s place in the lineup isn’t a surprise, and his linemates aren’t much of a surprise either. With Arvidsson now on Kopitar’s left side, Alex Iafallo was presumed to move to the second line. And Adrian Kempe, despite his inconsistencies, still possesses a lot of offensive skill, and a place on the second line for him is warranted.

All three players play a full 200-foot game. And are bound to be an excellent shutdown option for McLellan. The question for them will be whether they can provide a bit of offense as well.

In his first training camp, absent a Canuck crest across the front of his jersey, Alex Edler found himself paired alongside the swift skating Sean Walker. It feels like a proper union for the veteran defenseman. Coming up on a thousand games played in the NHL, Edler is considered more of a stay-at-home defenseman. This is great for Walker and gives him the ability to roam more in the offensive zone.

Edler only saw himself in a preseason lineup on two occasions. His first game on October 5th against Arizona was a bit up and down. And you can get the sense he was getting his feet back underneath him. Though, in his second game this past Saturday against Anaheim, he looked much more comfortable. And the veteran leadership Rob Blake was looking for when he signed him was much more evident. He was steady throughout the game. Making great first passes out of his zone and blocking multiple shots and passes in front of Jonathan Quick.

I’m not expecting Edler to play a full 82 games with the LA Kings this coming season. But in the time he is in the lineup, a calm and collective presence on the blueline would be a welcome delight for LA.