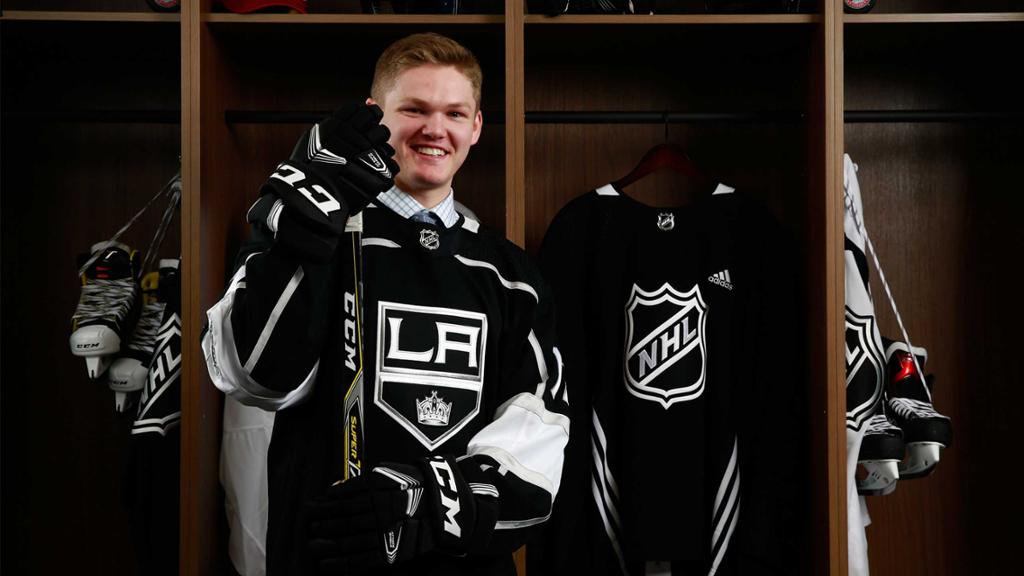 Heading into his sophomore season with the LA Kings, Mikey Anderson’s defensive positioning is already one of his more polished skills.

Mikey Anderson joined the LA Kings organization in June of 2017 after getting drafted in the fourth round by the club in the NHL Entry Draft. Anderson was recently coming off of a 32-point season in the USHL as a defenceman and was committed to the University of Minnesota-Duluth in the NCAA.

Mikey spent two full years in the NCAA with Minnesota-Duluth before getting a call up to play for the Kings’ AHL team, the Ontario Reign. After 53 games in Ontario, Anderson got called up to play a short stint of six games with the silver-and-black, and he hasn’t looked back ever since.

In the 2020-21 season, Mikey Anderson played 54 games in the NHL and had one goal and 11 points. The expectations were low for the 22-year-old defenceman, but it came as quite a shock to some when he received one Calder Trophy vote for Rookie of the Year.

Anderson didn’t exactly come into the league as a high-scoring defenseman, which made him so unattractive to the everyday NHL fan. But deep down, Mikey is much more than a bottom pairing, low-scoring defenceman.

Let’s start with the basic RAPM card of his regular-season play. In the 2020-21 NHL season, Mikey Anderson played a total of 1,009 minutes of hockey. In those 1,009 minutes, Anderson came up with an 82% of all-around defensive skill (an average replacement-level player has 50%) or better yet 82% on the expected goals against, meaning the number of times Anderson has bailed out the team are far above-average.

Now, I’m not suggesting he’s perfect at his defensive position, but Mikey is one of the best on the LA Kings squad, if not the best. The Kings’ biggest area of struggle in 2020-21 was the defensive side, but Mikey Anderson was there to make it a somewhat tolerable time for Cal Petersen.

Back to the RAPM chart — it also mentions how Mikey Anderson’s quality of competition was also above-average (80%), meaning he was playing against some of the hardest competition in his division, as well as high amounts of time. This appears to be true as he was forced to play against star players like Mark Stone of the Vegas Golden Knights, Nathan Mackinnon of the Colorado Avalanche, and Kirill Kaprizov of the Minnesota Wild.

There are many improvements to be made, especially offensively. As you can see, the xGF (expected goals for), which values offensive talent and goal generation, sits at 15%, which isn’t the greatest. Mikey is only 22, and he’s got a lot more time to figure out that aspect of his game, but he’s perfected his defensive game, and that’s all that matters for now. The Kings need some support in the defensive zone and Anderson helps out with those struggles very well.

His RAPM chart via Evolving Hockey furthers the point of Mikey succeeding defensively as his CA/60 (Corsi per 60) and his xGA/60 (expected goals against per 60) both stay in the blue area. Still, the offensive aspects sit at a red which means, it could use some improvement.

Onto the more basic area of his statistics, Mikey Anderson exceeds the expectations multiple times when it comes to young defenseman evaluation.

The chart above shows us the players on the LA Kings ranked from most ice time to the least last season. Obviously, not every roster player is on there as the list was cropped. But, the main idea is that Mikey Anderson, a 22-year-old defenseman, was second on the entire team in ice time (1,008.62), with only veteran and defensive partner Drew Doughty being ahead of him with 1,127.35 minutes of ice time.

Young defensemen who play a shutdown role are never played often by their respective coaches, but since Anderson impressed so many people, he earned himself loads of ice time.

Next comes the Kings’ blocked shot over the course of the 2020-21 season, and surprise-surprise, Mikey Anderson once again finishes second. This is a 22-year-old rookie defenceman we’re talking about here, who not only had a 1.37 BPG (blocks per game) but also was second on his team for blocked shots. It proves just how much Mikey is devoted to helping keep the puck out of his team’s crease.

Finally, the visual and eye-test portion of Mikey Anderson’s game. After watching the 2020-21 season and getting a really good feel on how Anderson plays, it’s quite obvious that this guy is the full package. He’s devoted, he’s got heart, he’s got grit, and he wants to compete. This guy won’t give up no matter what the case is.

If it’s an offensive rush, he’ll join in. If the puck is going back into the defensive zone, Mikey will be there to cover his spots and protect the net. In this case, it’s a basic board battle. The video below shows how Tyson Jost of the Colorado Avalanche attempts to retrieve the puck. However, Mikey Anderson swoops in and uses his body to push Jost away and continuously keeps giving him legal pushes to apply pressure causing Jost to fling the puck away out of pure fright.

Just a few seconds after that board battle, the puck ends up getting back into the Avalanche’s possession, and as Gabriel Landeskog shoots the puck trying to score on Cal Petersen, Cal stops the puck and loses sight of it. The one player that didn’t lose sight of the puck? Mikey Anderson.

Once Mikey sees that the puck could, in fact, trickle in over Petersen’s shoulder, his sense of urgency and athleticism kicks in and he jumps into the net to swat the puck away like he’s swatting a fly. That little swat saved the puck from going in, and the play was blown down.

The final clip, and the clip that proves Mikey’s defensive genius the best, shows his elite defensive stop on Kevin Fiala (Minnesota Wild) just seconds away from a goal. As Kevin Fiala speeds past Drew Doughty and Jonathan Quick, he goes in to make the wide-open wraparound… except, he wasn’t aware of Mikey Anderson standing in his position, which caused Fiala to act way too quickly as soon as he saw Anderson in front of him.

This panic move ended up in Fiala following through on his wraparound. Since Anderson didn’t chase Fiala when he was on the other side of the net (like many NHLers would do), he was able to dive in and out-strength Fiala and make an amazing save from the puck going in.

It’s the plays like this that make Mikey Anderson valuable and underrated. His defensive genius supports his case for him being LA’s best defensive defender. He always knows where to be on the ice and makes sure to make that extra play to save his team.

If Mikey Anderson continues to play this well defensively in the future and increases his offensive production, he could be a Top-15 defenceman in the NHL one day. The potential is existent, and if he is played correctly while given the right defensive partners in the next few years, he’ll turn some heads around the league.

He also stopped by the podcast to reflect back on his first full season. See the link below.