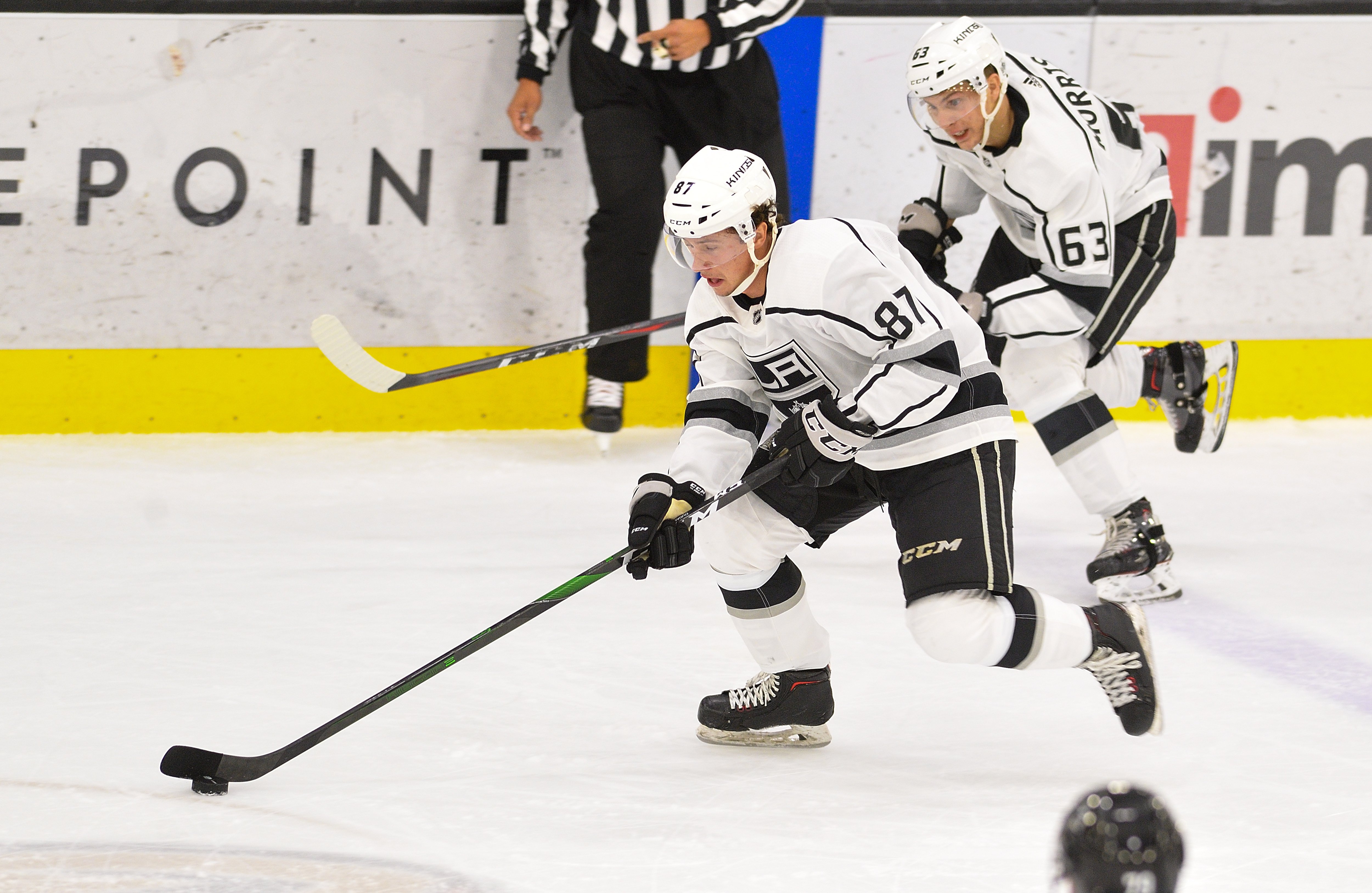 Parry Sound, ON native Aidan Dudas is another LA Kings forward prospect hoping to establish himself at the AHL level with the Ontario Reign.

The story of Aidan Dudas is a unique one in the hockey world. That said, he hasn’t let the fact that he took the road less traveled be any sort of deterrent in achieving his goal.

Drafted by the LA Kings in the fourth round of the 2018 NHL Entry Draft, the 5-foot-8 Dudas plays with a chip on his shoulder. The hallmarks of his game include being first on a forecheck, strong penalty killing, and being hard to play against.

For him to cement a spot in a competitive Ontario Reign lineup, he’ll need to bring that style of play every night.

Reign Head Coach John Wroblewski echoes this sentiment in how he sees the youngster’s path ahead:

If we’re being honest, it shouldn’t come as much of a surprise that the path to the NHL for the Parry Sound, ON, native is by being effective at some of the more underappreciated aspects of the game, rather than as a point-producer. In his four years with Owen Sound of the Ontario Hockey League, it wasn’t until his fourth season where he scored at a point-per-game pace:

To Dudas’ credit, he recognized back in his junior days that his work ethic was going to be what sets him apart from everyone else:

Understand that points aren’t the be-all-end-all in player evaluation, but we shouldn’t expect someone to be a top- or even middle-six player at the professional level if the OHL production doesn’t suggest that.

With the Reign, he played six games during the 2018-19 season picking up two assists; and registered six goals and 11 points in 37 games last season.

This isn’t to say a role can’t be carved out. In The Athletic’s NHL Pipeline Rankings, Corey Pronman listed Dudas just outside his top 19 prospects in his “Has a chance to play” section for the organization. While Pronman has questions about the size and overall skating for Dudas, he did acknowledge that competitive nature of his:

“Dudas is a very skilled and competitive player, but he’s an undersized forward who doesn’t have great speed for the NHL level.”

The “very skilled” part of that quote may tend to get lost a bit in the evaluation of Dudas’ game. He is someone who was drafted, in part, due to his skill. He showcased it at the 2018 Top Prospects Game with this beauty:

The skill has shown in flashes in the AHL, as well. You don’t score a goal like this, with heavy back pressure, without having great patience with the puck and trust in your own ability:

Among the star-studded prospect cast in Ontario, Dudas won’t be expected to play a top-six role. Used mostly in a bottom-six, penalty killer role for the Reign during the 2020-21 season, two of his six goals scored were short-handed. He can be a threat to score short-handed with how hard he works, and that sprinkle of skill added to that.

Up next is him at 5-on-5. However, it’s this type of relentless play that benefits him on the penalty kill, as well:

First goal of the night from Aidan Dudas 🚨 pic.twitter.com/2KUG9rSRDq

After receiving the pass in the neutral zone, he recognizes that he’s on his own with two San Jose defensemen. He wins the battle on the forecheck and makes a pass back to his point-man. It’s what he does after he makes that pass, though, that will help make him an effective — and, more importantly, reliable — player. He doesn’t stay behind the net and watch the play unfold; he sees defenseman Cameron Gaunce is going to shoot the puck, so he creeps to the back door and is there to clean up the loose puck. This is much more like the type of goal we can expect from the 21-year-old this season.

As noted prior, he was a four-year player in the OHL, so he was always more of a project prospect than someone who makes an immediate impact. He showed some signs at last week’s development camp of making strides in his game:

“The last player to stick out in the afternoon session was Aidan Dudas. Dudas, like the three aforementioned prospects, was a member of the Ontario Reign last season and so far has shown growth in the two days of camp. In today’s session, Dudas was impressive in consistently controlling the puck through the neutral zone, creating successful offensive zone entries.”

Those are some of the little things a player like Dudas will need to excel at to win and keep his spot on the roster. Glimpses of this type of under-the-radar type play have been in Dudas’ game before.

Here is an example of his instincts and movement off the puck, leading to a goal during the 2019 rookie tournament in Colorado:

Dudas has two years left on his entry-level contract to see where (or if) he’s able to fit in at the professional level. Entering what will be his second full pro season, Dudas will have his work cut out for him as he is yet another forward in what seems to be a never-ending list in the organization. He did make the roster for the rookie tournament in Arizona later this month. If he’s able to combine that sneaky skill, incessant forechecking, along with instinctual movement away from the puck, there could be a bottom-six role for him.