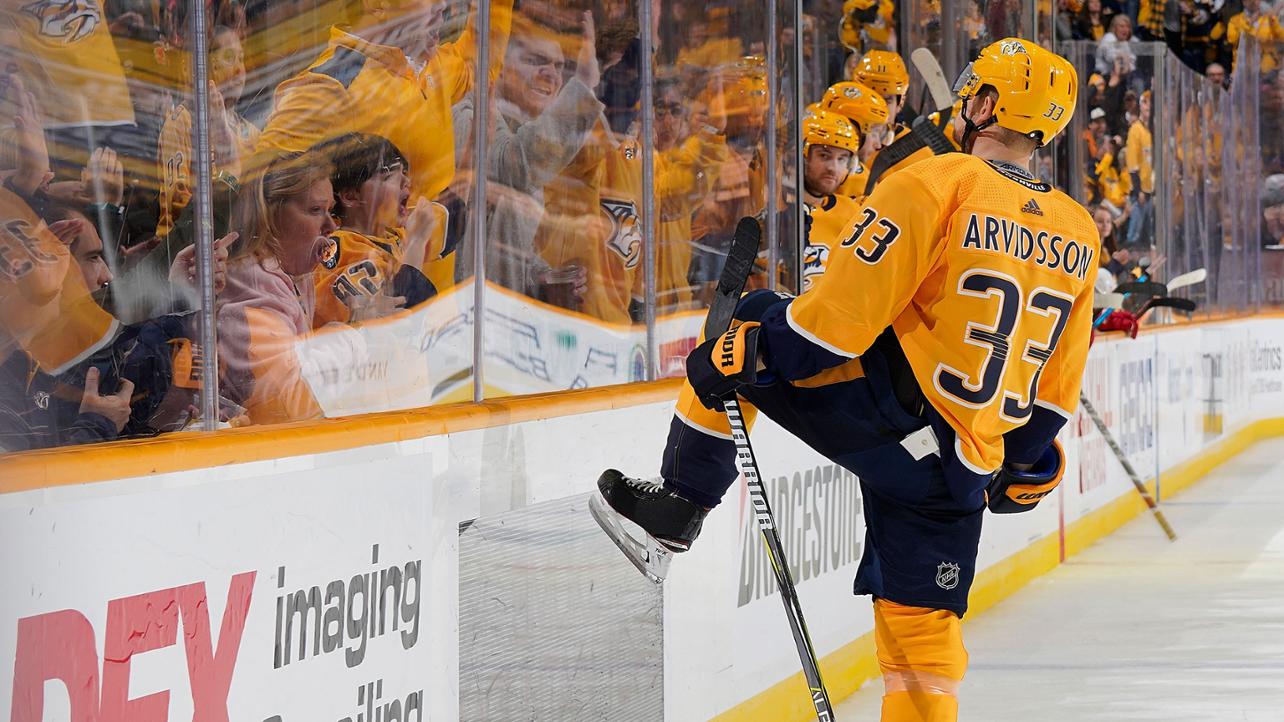 An LA Kings top line with Anze Kopitar and Viktor Arvidsson could produce a ton of points in the 2021-22 season.

The LA Kings wasted little time in the offseason to improve their roster, one that finished sixth in the Honda West Division in a reduced 56-game schedule last season. Los Angeles identified 28-year-old Viktor Arvidsson as a player to acquire, sending two draft picks to Nashville in exchange. Arvidsson will join a relatively young Kings squad beaming with talent in the prospect pool but also with one of the league’s most underrated and consistent players in Anze Kopitar.

“I’m really excited,” Arvidsson said on joining the Kings. “I feel like it’s a great opportunity for me and for the team. We have something really upcoming, like with young players and all the players that really want to win and are hungry to win. So, I’m really, really excited to be a part of it.”
After finishing with the fifth-fewest goals (142) in the league, the Kings hope the addition of Arvidsson — and Phillip Danault — helps the team produce more points.

The Swedish forward comes to Los Angeles tallying his lowest point total (25) since his first full season in the league during the 2015-16 season. However, with a Nashville Predators squad in transition, combined with Arvidsson recording his lowest shot rate (6.6%), it’s relatively easy to understand the dropoff in points.

Now, he figures to be playing alongside one of the league’s best facilitators.

“I like the Arvidsson wrinkle a lot more than that line that was pretty productive the past couple of years with [Dustin] Brown and [Alex] Iafallo, but it was a little stale,” said Pete Jensen on the NHL Fantasy On Ice Podcast. “I didn’t think it really brought the most out of Kopitar, [or] got the most out of him.

“Now between having Arvidsson — a goal-scorer who plays two ways [and is] really strong at even strength — between having him and then also having the support behind him of Phillip Danault on a separate line, I mean, all of a sudden, you could see Kopitar maybe get back to ’90-plus-point Anze Kopitar,’ if the offense opens up for him. And you can see Viktor Arvidsson get back to ’30-plus-goal, 200-plus-shot Viktor Arvidsson,'” Jensen concluded.

Analytically, Arvidsson’s offensive and defensive metrics in 2021 were some of the best of his career, but with the dropoff in shots on goal, his finishing ability really dragged him down. Even still, his finishing metrics have him in the 84th percentile in the league over the last three years.

There’s so much to like with him coming into a team like Los Angeles that will be looking to put the puck on his stick and help the team light the lamp more often. His playdriving WAR metrics were at a career-high last year, boding well for his new linemates, which, again, figures to include Kopitar, who tallied a career-high 92 points just four seasons ago.

But the Kings captain hasn’t had the same talent around him to produce those numbers until now.

For what it’s worth, the podcast went on to say that they expect Arvidsson to be a 60-plus point-producer for the LA Kings in the upcoming season, shooting the puck at a more Arvidsson-Esque 12% clip and registering 250 shots on goal.

If that all comes to fruition, the Kings should find themselves much higher in the offensive rankings than the last couple of seasons, with the potential of flirting with a playoff spot.