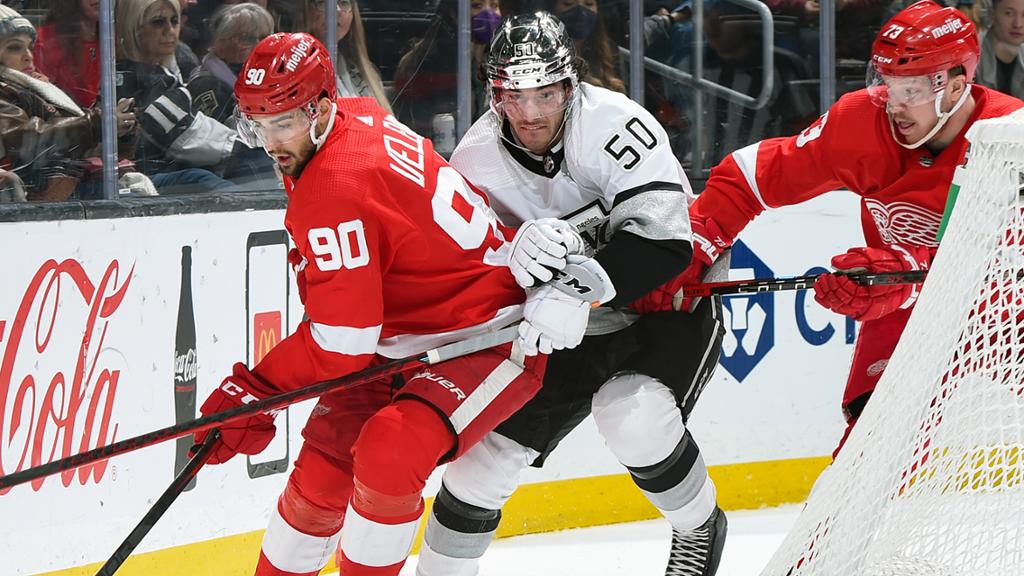 The LA Kings have won three straight games and have picked up points in four straight. They welcome the Detroit Red Wings to Crypto.com Arena on Saturday.

Here’s how the Kings skated in practice on Friday:

There are no apparent changes coming from LA’s 2-1 win over Chicago on Thursday, though, as always, keep an eye out for any potential updates after the morning skate. After Saturday’s game, the Kings will hit the road for four divisional matchups that include a back-to-back in Vancouver and Seattle.

Cal Petersen hasn’t played since the team’s November 1st loss in Dallas and he’s sure to be needed on the road trip. There’s an outside chance he gets the net on Saturday to get him some action before the trip.

Here’s how the Red Wings lined up in their 8-2 loss to the Rangers on Thursday:

After winning four in a row, Detroit has now dropped their last two. I’d expect to see Alex Nedeljkovic between the pipes for the Red Wings after Ville Husso was in net for all eight goals against on Thursday. The 26-year-old Nedeljkovic is 2-2-1 with a 4.34 goals-against average and a .880 save percentage.

The Kings have been the superior team in most of the 5-on-5 statistics. We’ve seen them settle into their structure of late, and this should be a game where they thoroughly control the shot-share. In the team’s first meeting of the season, a 5-4 overtime win for LA, the Kings controlled nearly 57% of the shot attempts, over 65% of the expected-goals share, along with 64% of the high-danger chances.

I’m not sure it’d be an NHL season if we weren’t talking about the struggles of the LA Kings’ power play. After their 0-4 performance against Chicago on Thursday, LA is now just 17.4% on the season (26th in the NHL). It sounds like we could see some tweaking of the system, we’ll see if it leads to any improvement on Saturday.

The Kings penalty kill is also below average right now with a 77.1% efficiency rate, good for 19th in the league. At least for the penalty kill, they won’t have to worry about a strong power play coming at them. Detroit’s power play is behind LA’s in 27th place (17%). The Wings’ 81.4% penalty kill rate is good for 12th in the NHL.

*Note: the odds below are for sports books offered in New York. Refer to available sports books specific to your state.
**Odds as of 8:30 am ET/5:30 am PT and may have changed since this has been published.

As expected, the Kings are big-time favorites in this one. BetRivers’ -208 is the best price you can get on the hosts. For Detroit, they are +185 at WynnBet. The total on the game is set at six, with DraftKings offering the best price on the Over (+100) while BetRivers is offering the Under at -104.

Kevin Fiala has been one of the best Kings’ forwards all season. He leads the team in Shot Assists and overall Shot Contributions at 5-on-5. And, if practice reports are a preview, he could be in a prime passing role on the power play. He is +100 to pick up an assist and +170 to register a point on the power play.

Drew Doughty is having another strong campaign in LA. He may also be in a new spot on the power play in the left circle. With options like Fiala and Anze Kopitar potentially feeding him for one-time options, he is +450 to score a goal and +200 to pick up a power play point.

With the way the LA Kings are playing lately, the best chance to get them is on the power play. Dominik Kubalik leads Detroit with eight points with the man advantage. He is +225 to pick up a power play point on Saturday.

Pius Suter is finding himself on the top line with the Wings, he is +380 to find the back of the net.