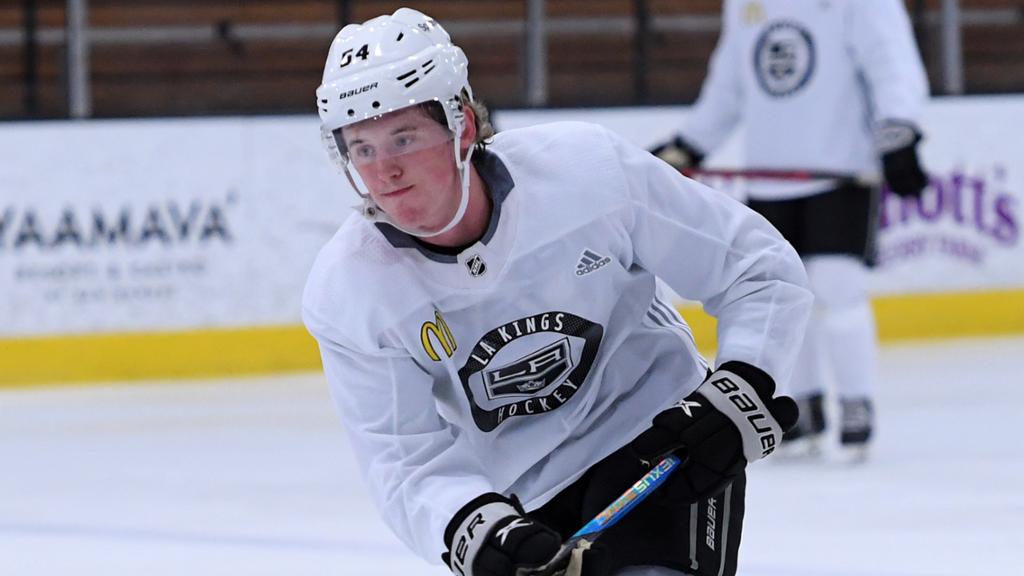 The LA Kings have one of the deeper prospect pools in the NHL. Three players, in particular, could push for a roster spot in 2022-23.

The 2022-23 NHL season is just around the corner, and hockey fans have finally gotten a taste of hockey, with the rookie tournaments coming to a close and the NHL training camp commencing. While the games won’t matter and the rosters are still a work in progress, hockey fans, including LA Kings fans, once again have something to look forward to.

Training camps are generally known as the 2-3 weeks of conditioning and training to get players into shape for the regular season. While that is true, it’s also a perfect opportunity for young players to prove themselves and make a push for the NHL. If they impress the coaches enough in the 7 pre-season games and the countless on and off-ice practices, there’s a chance that a young player makes the team.

For teams solely built off of full-time NHLers with almost no young star power (such as Tampa Bay and Pittsburgh), their decisions may come off a little easier, seeing that their group is basically already determined. But there are also teams who have so much young talent that can make a serious push for the NHL and even outplay some regular roster players. Teams like that include the Arizona Coyotes and the Anaheim Ducks.

The LA Kings are the middle child in all of that. They have a group of experienced NHLers who are likely to make the team out of anyone else, but they also have many young players who are ready to make a push for the NHL as full-time players. The hard decisions of which young players get the step up (if they’ve deserved it, that is) will surely impact Todd McLellan once camp concludes. Basically, we have a problem on our hands. At least it’s a good problem to have.

In today’s article, we’ll go over three young players who can make a push for the NHL lineup out of camp. If a player has played 20 NHL games or less, they will not be considered for this list. Players like Tobias Bjornfot, Quinton Byfield, and Jordan Spence will not count for obvious reasons.

The LA Kings have an unbelievable defensive prospect pool, particularly right-shot defenders. One of those defensemen happens to be the 2021 8th overall pick, Brandt Clarke.

Clarke has spent the last three seasons in two different leagues. In 2019-20, Clarke appeared in 57 OHL games with the Barrie Colts and tallied 38 points. The following season saw the OHL season get canceled due to Covid-19, and Clarke was off to the Slovakian league, where he played 26 games and had 15 points. That summer, Clarke was picked up by the Kings in the first round of the draft and signed his entry-level contract shortly after.

Last year, Clarke played in 55 OHL games with the Colts and put up an impressive 59 points. We saw him dominate in a junior league, but we never really did see how he would perform in the NHL playing against more experienced players from all over the world. That is until the rookie tournament in mid-September. Clarke played in all three games, and in those three games, he tallied 4 assists and one shootout winner.

It’s fair to say that Clarke impressed us all with his performance at the tournament. He outplayed everyone else using his speed, smooth edges, and agility. While the Kings already seem to have a completely filled-out defensive lineup – especially on the right side. If Clarke plays as he did in this tournament, it’ll be difficult to count him out.

What will make this such a difficult judgment is that Clarke either has to be in LA or the OHL. There’s no option for the 19-year-old to get sent down to the AHL because he isn’t eligible for it quite yet. That means that if the Kings do choose to send him down, it’ll have to be back to the Barrie Colts. The worst part about it is that if they do send him down, they won’t be able to call him back up. That’s what makes Brandt Clarke on the NHL roster such a huge question mark. Will the Kings want to play him regularly in the lineup, or are they willing to give him up for another year? That’s a question that will be answered by Clarke’s performance at training camp.

Samuel Fagemo played in 4 NHL games last year, and he was held scoreless. His showing wasn’t the most impressive as he was given top-tier chances playing with Adrian Kempe and Anze Kopitar. Yet, he came up empty-handed.

Although his NHL stint wasn’t the best statistically, he played exactly like he was expected to visually. He was actively shooting the puck, he played with high intensity, skating at full speed from end to end, and generated a few secondary scoring opportunities that unfortunately didn’t go his way. Of course, it would have been nice to see Fagemo on the scoresheet at least once in those four games, but that wasn’t the way the wind blew.

Fagemo played his first full AHL season in 2021-22, scoring 27 goals in 63 games. As a 21-year-old player, Fagemo was second on the team in goals, right behind now-St. Louis Blue, Martin Frk.

Most deadly on the power play, he may very well earn a spot on the team because of that power play ability. His shoot-first mentality will only help his case, too. Since the Kings struggled so much last year, they may be looking for a goal-scoring spark. And who else other than the guy that made a name for himself scoring goals on the Ontario Reign power play last season?

Even though this one feels unlikely because of how stacked LA’s offensive core is at all levels, we can still envision Fagemo getting one or two call-ups throughout the year. Fagemo is still not waiver eligible because he’s on his ELC, so that makes moving him around a lot more flexible. With development being rapid and notable extra players like Frk being gone, this opens up the door for Fagemo to step up and have a chance to play on the Kings roster when the opportunity presents itself.

The most unlikely option out of the three, but the most interesting one. Taylor Ward signed his entry-level contract with the LA Kings on March 19th, which would see him play the first year in Ontario on a tryout contract. This year, the contract has officially kicked in, and he can now be called up and sent down.

Ward was never drafted, but his father, Dixon, played 34 games with the Kings back in 1993-94. When the Kings signed Taylor, his NCAA season came to an unfortunate close with a disappointing playoff loss. Ward had played in 4 NCAA seasons with the University of Nebraska-Omaha and played exceptionally well in all four seasons. He tallied 19 goals and 39 points in 38 games in his final season.

Once his season was over in university, Ward joined the Ontario Reign, where he had 10 points in 16 games. Although he had only scored 3 goals, Ward brought physicality, drive, and a top-notch transition game with every single shift. Even though he is 24 years old, which is a bit older than most players are when they sign their ELCs, he still looked great.

Ward impressed at the rookie tournament, scoring multiple goals, including this rocket of a shot on the powerplay:

GOALLLL! @tward74 buries the pass from @brandtclarke55 to even the game at 2-2 🫡

Taylor Ward is most likely to begin the 2022-23 season in the AHL with the Reign, but it’ll be hard to imagine him not getting a shot in the big league at some point in the year. If he’ll be able to compete and play as he did in the AHL last year and at this year’s rookie tournament, he’ll undeniably get a nod in the NHL sometime in the coming year.

For the LA Kings this year, they’ll have multiple younger players with potential that is sky-high. Those players will use training camp as an advantage to get a spot in the NHL. Even if they don’t make it right away, they’ll likely get a call-up later in the year if they make an impression on the coaching staff.