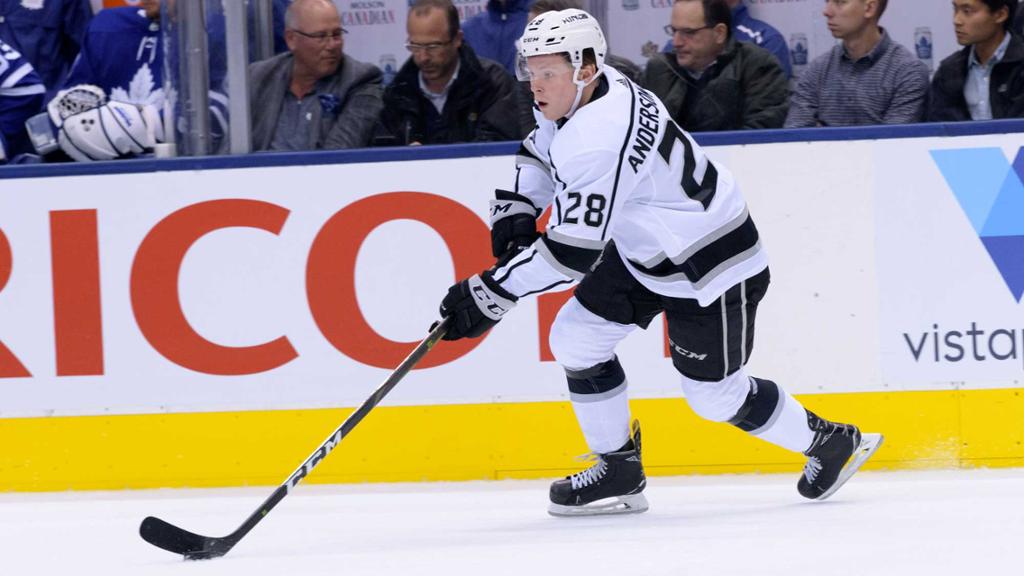 With training camp right around the corner, we are previewing each player on the LA Kings roster. Up next: Jaret Anderson-Dolan!

Jaret Anderson-Dolan spent all of the 2020-21 season in the NHL with the LA Kings but lost the fourth-line center battle in training camp at the start of the 2021-22 season. The 2017 second-rounder answered the bell in Ontario, finishing third on the Reign in goals (24) and points (47) in 54 games. Of Anderson-Dolan’s 24 goals, 12 of them came with the man advantage. The evolution of his game in becoming a very effective player on the power play was an encouraging sign.

He was used as the down-low man in the 1-3-1 and was very smart without the puck, knowing when to be an outlet behind the net, or in this case, in front of the net for a screen and tip opportunity:

His play did earn him a call-up to the Kings, appearing in a pair of games in December before another handful in March. All in all, in the seven games, Anderson-Dolan did not record a point.

The 23-year-old Anderson-Dolan is among a crop of forwards in competition for an NHL spot. He, along with Gabriel Vilardi, Rasmus Kupari, Lias Andersson, and Samuel Fagemo, are just some of the names vying for the final two forward positions. Of that group, Kupari and Fagemo do not need to clear waivers. While Andersson does, I tend to think that both Vilardi and Anderson-Dolan would be ahead of him on the depth chart. And just because Kupari and Fagemo are waiver exempt doesn’t make them automatic send-downs. Kupari showed good flashes in his time in the NHL last season, and a goal scorer like Fagemo could be attractive to the Kings out of camp.

Drafted as a center, Anderson-Dolan did spend some time on the wing last season with the Reign. He became a very versatile player, capable of playing on any of the four lines, and was instrumental in both the power play and penalty kill. He is a valuable depth piece to have and would be one of my top choices to keep around at the start of the season.

The competition in training camp will be tough but worth paying attention to.