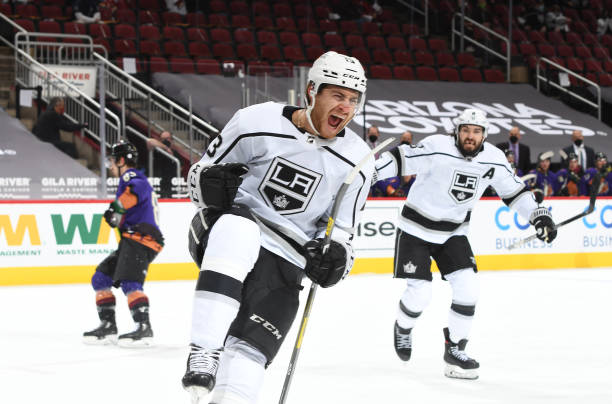 With training camp right around the corner, we are previewing each player on the LA Kings roster. Up next: Gabriel Vilardi!

Vilardi has had an underwhelming start to his career since being drafted 11th overall by the LA Kings in 2017. Last year it didn’t get any better. After a decent preseason showing, in which he recorded three goals, Vilardi looked to be slowly turning the corner.

However, he soon began to fall out of favor and found himself down in Ontario. With his play at the center position not being good enough- especially his 45.8% in the face-off dot- and a short stint on the COVID-19 list, the Kings would assign him to the Reign, where he would transition to the wing.

The move seemed to pay off as Vilardi recorded 15 goals and 38 points in 39 games with a shooting percentage of 19.2%. He was also effective in the bumper position on the powerplay in Ontario which was number one in the AHL. With injuries piling up, Vilardi was one of many call-ups to the Kings in mid-March as he would get another shot to prove himself. He would end his season with five goals, two assists, and seven points in 25 games.

Gabe Vilardi with his first goal of the season on the PP! #GoKingsGo pic.twitter.com/bF7s0DGHNP

This training camp will be very huge for Vilardi. He’s got the skill but needs to put it all together if he wants to have a future in LA. With a crowded forward group, there will be competition in the bottom six. One of the knocks on Vilardi during his time in LA has been his defensive game. If he wants to crack a spot in the lineup that will need to change.

He has good hands and a good shot, it’s just time to put all the tools together during this training camp. With so many other options both in the organization, this may be the last shot Vilardi gets in Los Angeles.