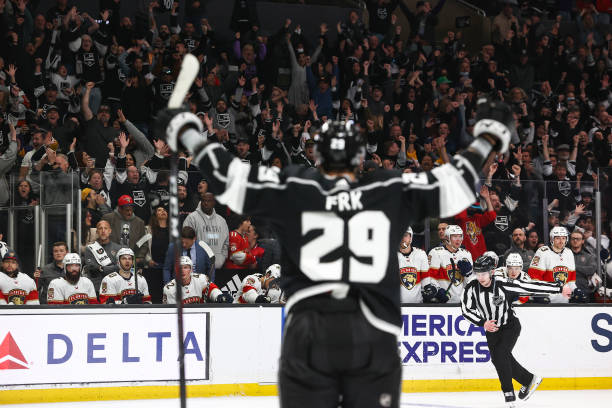 After spending three years in the LA Kings organization, forward Martin Frk has found a new home in St. Louis.

The Blues have signed forward Martin Frk to a one-year, two-way contract. https://t.co/SMu3sQJVYT

Frk, 28, joined the LA Kings in the summer of 2019 on a one-year, two-way contract, a similar deal he signed with the St. Louis Blues Friday morning. In that time span, Frk spent most of his time in the AHL with the Ontario Reign.

This past season his 40 goals were first among the team. In 109 games in Ontario, Frk recorded 69 goals, 52 assists, and 121 points. His most memorable moment in Ontario has to be the hardest slapshot in the AHL all-star classic in 2020.

He made his debut for the LA Kings on December 27, 2019, and registered two goals in a 3-2 overtime win for the Kings. But, his goal this past season against the Florida Panthers will probably be the one Kings fans remember him most for.

All the best to Martin Frk who signed in St. Louis this morning. This goal was bonkers. 🥲 pic.twitter.com/i63yQzIZRO

That power play threat and slapshot will be sorely missed.

Who can replace Frk?

With the Kings having plenty of forwards in the system, and Frk being 28, you can understand Frk wanting to try and get a crack on an NHL roster. You can’t play this game forever. As for the Ontario Reign, they will have to find Frk’s replacement on both the top line and power play unit. One name that comes to mind is forward Samuel Fagemo.

Fagemo played on the top line with MVP T.J. Tynan while Frk got called up to LA in early January and played noticeably well. While Fagemo doesn’t have the hard slapshot Frk has, he can play in Frk’s spot on the powerplay.

We will see who takes that spot on the first line and power play come October.