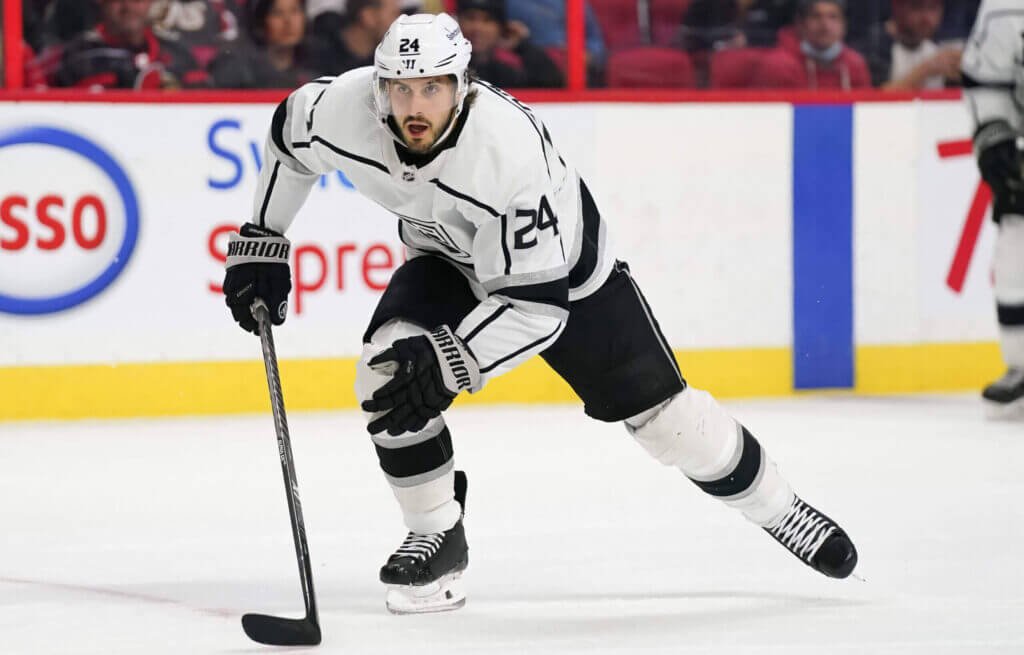 After signing last summer, Phillip Danault has made an immediate impact on the LA Kings in the 2021-22 season.

When the LA Kings signed (now ex) Montreal Canadiens forward, Phillip Danault, there was an uncertainty in the sense of term, value, and production.

Danault and the Canadiens were fresh off losing in the Stanley Cup Final to the Tampa Bay Lightning. During that playoff run, Danault had only one goal and four points in 22 games played. While the point production wasn’t significant, he had played some of the best playoff defensive hockey we’ve seen in years. Throughout the push, Danault was given the responsibility of playing against some of the hardest matchups during the playoffs. Shutting down offensive juggernauts like Mitch Marner, Auston Matthews, Mark Stone, Max Pacioretty, and Kyle Connor.

Once he had departed from his childhood favorite team, he joined the LA Kings on the first day of free agency, signing a lengthy six-year contract that held an AAV of $5.5 million. The contract would have a complete no-movement clause in the first three years, and a 10-team modified no-trade clause for the final three years.

It was a magnanimous contract to give out seeing how Danault was coming off a season where he scored just five goals and 24 points in 53 games. But as it turns out, he brought more value to the table than people would think. The hard truth was that he was the heart and soul of the Canadiens. Playing the majority of the season on a line with now-New Jersey Devil, Tomas Tatar, and Brendan Gallagher, that line was one of Montreal’s most productive lines. While Danault wasn’t the one scoring, he helped the line endeavor offensively, while staying responsible in the defensive zone.

Gallagher has admittedly had an awful 2021-22 campaign, but we’d be foolish to think we wouldn’t have seen it coming. In almost every major analytical aspect, Gallagher exceeded playing on a line with Phil Danault. When he played with him, they were one of the best duos. They had various finishing issues taking into account that their on-ice shooting percentage wasn’t top tier, as well as their GA/60, but that could be blamed on Montreal’s mediocre goaltending. Other than that, they monopolized the contention.

Gallagher was a second-rate player at best without Phil Danault. Most of his statistics sat at the mid-point level, except for his GA/60, his ONSH%, and his GF%. All three of those were dragging him down tremendously.

It’s clear that Danault made a significant impact on the Canadiens, and now that they no longer have him. They’ve missed their chance at the playoffs and are one of the worst teams in the NHL.

The 29-year-old Danault has always had a positive offensive impact, even if the points and goals weren’t showing it.

At the time of his signing, the Victoriaville native’s finishing was obviously an issue. Keeping in mind that he had scored only five goals and had an ONSH% of 6.85%, he managed to have an xGF of 81% and he was noticeably efficient with his primary assists/60. Danault had always been a talented offensive player, and we’ve seen it from him in seasons like 2018-19 where he had 53 points in 81 games, and in 2019-20 where he recorded 47 points in 71 games.

This year, his finishing and offensive production has skyrocketed. Playing the majority of the season centering Thousand Oaks native Trevor Moore and fellow offseason addition Viktor Arvidsson, Danault has a new career-high in goals (24) and has a total of 48 points in 75 games. With five games left in the regular season, he’ll likely hit 50 points.

It’s hard to not gossip over Danault’s explosion with his offensive production, but we’ll leave that aside, for now, to discuss how he’s become a leader on and off the ice for the LA Kings, and how he’s quite possibly the team’s MVP this season.

When Drew Doughty and Dustin Brown were out with injuries, Alex Iafallo and Danault were named the alternate captains. It took a while, but Brown returned to the Kings’ lineup. While it was nice to have the former captain return to the roster, Kings fans were hit with the startling news that their number one defenseman would miss the rest of the season after undergoing successful wrist surgery.

Danault has done everything in his power to help the Kings take the next step into battling for the playoffs this year. He even said so in a postgame interview on Saturday following a 2-1 win over the Columbus Blue Jackets, by mentioning how the Kings organization has treated him well, so he had the urge to do anything for the team.

He’s done exactly that. Playing in every situation for the Kings this year, and against some of the toughest competition. Danualt is a staple on both special teams’ units and his line, nicknamed the “nice line”, has received some of the highest TOI out of any other lines that we’ve seen. Danault has also been trusted in last-minute bearings like being the extra man out in a 6-on-5.

We’ve detected how Danault never caves in and he always leaves his all out on the ice. He’s currently 33rd among all NHL forwards in even-strength blocked shots with 49. Not only have they been regular boring blocks, but he’s made some last-second, game-saving blocks as well.

PHIL DANAULT SAVES THE LA KINGS WITH A HUGE BLOCK AND THE KINGS TAKE THE HUGE WIN!!!!! #GoKingsGo pic.twitter.com/DrCBcStr0M

His ability to break out pucks and generate offensive opportunities while not being the fastest skater is admirable to watch. He’s managed to throw his weight around this year. Whether it’s laying a check or winning puck battles, he’s no stranger to confrontation.

Phil Danault is so much fun to watch lol pic.twitter.com/A6zO9uJBOl

He’s also been willing to drop the gloves. We’ve seen him jump in to defend his teammates on several occasions.

Danault has established himself as a premier center in the NHL, even if no one else is talking about it. As much as we need to praise players like Trevor Moore and Adrian Kempe for their fantastic performances this season, Danault has been the LA Kings’ MVP this year.

He’s been a player that represents what it means to be a leader on and off the ice. Phillip Danault is worth every single dollar, and more.