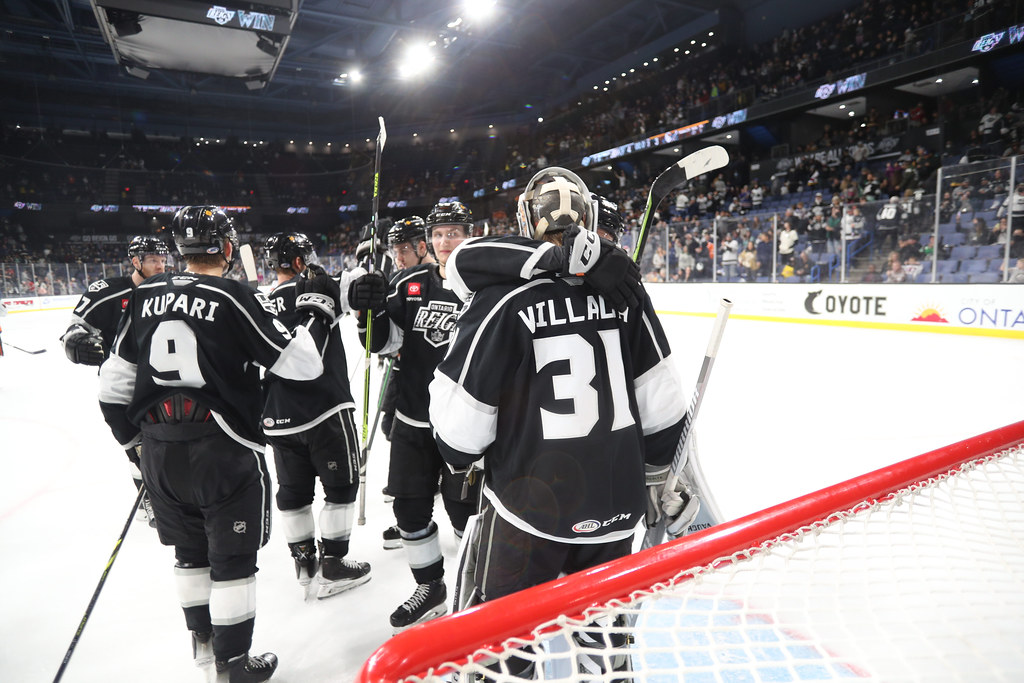 With the Ontario Reign defeating the San Diego Gulls 5-2 on Saturday night, they have secured at least second place in the division.

Even though the Gulls lost to Ontario, they clinched a playoff spot themselves with the Tucson Roadrunners losing to the Colorado Eagles 6-5. All seven playoff spots in the Pacific division have been clinched, all that is left are matchups that need to be determined. With the AHL playoffs around the corner, let’s see what the division standings currently look like below:

If the playoffs were to start today, the Ontario Reign would square off against their Southern California rivals San Diego Gulls. Having secured themselves at finishing no lower than the second seed in the division, the Reign have a shot at snagging the first seed from the Stockton Heat. For those who need a refresher, down below is how matchups are determined by seeding for the playoffs:

Here are three first-round scenarios in the playoffs for the Ontario Reign:

This scenario is probably the likeliest scenario of the three. As mentioned above, if the playoffs were to start today, the Ontario Reign would match up with the San Diego Gulls in a best-of-three first-round series. Wouldn’t that be a great series to watch?

Going into the season scoring would be the issue for the Gulls. In the offseason, the Gulls lost three of their top five scorers from the 2020-2021 season. And also add the fact that Trevor Zegras made the jump to the NHL this year as well. The leading goal scorer is Alex Limoges with 21 goals. San Diego only has one 20-goal scorer on the year and is bottom three in goals for this year.

For the Ontario Reign, scoring goals has not been the issue at all this year. In fact, they lead the league in goals scored and average almost four goals per game. Going into this season, the Reign had nearly everyone returning from last season, adding in first-year pros like Helge Grans and Jordan Spence and the reigning AHL MVP T.J. Tynan and you have a loaded group that can score in bunches.

2. Matchup against the Henderson Silver Knights

This matchup probably might be unlikely to happen given the current standings above. While the Henderson Silver Knights are up nine points on the Gulls, it seems unlikely they will drop to the 7th seed in the division. All they need is four points to solidify the 6th seed. But, in case the Gulls catch fire and the Silver Knights go cold, the Ontario Reign could match up against the Silver Knights in round one.

This season for Henderson has been up and down. Once close to the Reign in the standings, a rough month of March had the Silver Knights drop in the standings and because of it, they are 6th in the division. On the season Henderson is currently 24th in goals scored but is 10th in goals allowed.

An opposite to the Ontario Reign who lead the league in goals scored but 14th in goals against. Ontario hasn’t had any issues with the Silver Knights this year as they lead the season series with a record of 6-1-0-0 (they play each other one more time on April 30th in Henderson). That one loss came on New Year’s Eve in Ontario. While Ontario has averaged four goals per game against Henderson, they’ve only allowed two goals per game against Henderson as well. They’ve gotten some very good goaltending against the Silver Knights. It should be an interesting series nevertheless.

3. Snag the first seed and a first-round bye

This didn’t seem realistic about a week ago if you were to ask me. But with the Reign getting some help from the Silver Knights, who defeated the Stockton Heat twice this weekend, the Reign trail the Heat by three points with four games remaining for first place. So you’re saying there’s a chance? Yes.

Stockton owns the tiebreaker against the Reign winning five of the eight matchups. With five games remaining for them, the Heat need only six points to secure themselves the first seed. You can bet the Reign will be scoreboard watching the next couple of weeks. Remember, the first seed in the division gets a bye in the first-round series.

The AHL season ends on April 30th. Within these next two weeks, we will see which scenario will happen for the Ontario Reign. The 2nd seed plays the 7th seed. So whoever ends up in the 7th seed, that’s who the Reign will play if they don’t overtake the Stockton Heat for the first seed.