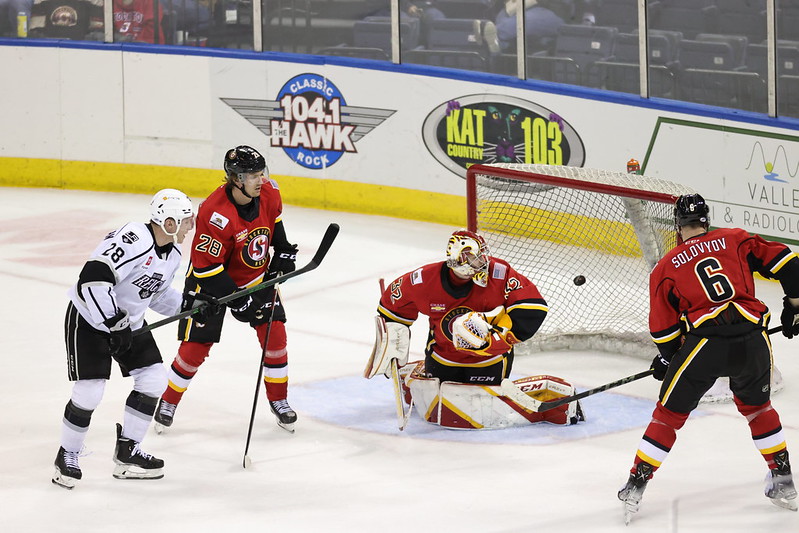 The Ontario Reign travel to Stockton to kick off a two-game weekend series against the division-leading Stockton Heat.

Three things to watch for in tonight’s matchup

In one corner, we have the Ontario Reign, the second seed in the division, with the league’s best powerplay. In the other corner, we have the Stockton Heat, the first seed in the division, with the league’s best penalty kill. Think of it as the best offense versus the best defense. In the six previous matchups, the Stockton Heat’s penalty kill has had the upper hand against the Ontario Reign’s powerplay. At one point Stockton had killed off ten straight Ontario powerplays before the Reign broke through. In their last meeting back on February 12th, Ontario’s powerplay finally had the upper hand on Stockton’s penalty kill going 3-for-5 on the man advantage. After hitting a small bump in the road, the Reign’s powerplay has looked better of late and will look to continue that trend in tonight’s matchup.

“Two big games for us, that’s how we treat these guys”, Reign defenseman Austin Strand said after his team’s 5-2 win against the Heat on February 11th. You can bet that these two games this weekend will feel the same way again. All six matchups have had a playoff-like atmosphere in them going all the way back to the matchups between the two teams in November.

3. Matchup between the pipes?

In every meeting, the Reign has faced Stockton goalie Dustin Wolf all but once. The former junior LA King has had a phenomenal season for Stockton. Among qualified goalies, he is first in wins (31), second in save percentage (.927), and third in goals-against average (2.23). With the two teams squaring off on Friday and Sunday, I would expect Heat head coach Mitch Love to peg Wolf as the starting goalie for both matchups. In the last four meetings, the Reign has scored at least four goals in three of those games against Wolf including him getting pulled in the 3rd period on February 11th after surrendering five goals through two periods.

Now for the Reign starter. They have had three starters in the net when facing the Heat. Matthew Villalta has four starts, Lukas Parik and Garret Sparks each have had one. Among qualified goalies, Villalta is 3rd in wins (24), twenty-fourth in save percentage (9.04), and thirty-first in goals-against average (2.91). While the numbers have not looked as great as Wolf’s, Villalta, has put together a better season than last year.

I would expect him to get both matchups against the Heat as well, but I wouldn’t be surprised if he gets a rest for one of the games either because of his workload recently. With two big games for the Reign this weekend, they perhaps could start him in both games. After all, in the big games, you want your best goalie out there.

The puck drops at 7:00 PM PT and can be seen on AHLTV. Sit back and enjoy the game Reign fans.