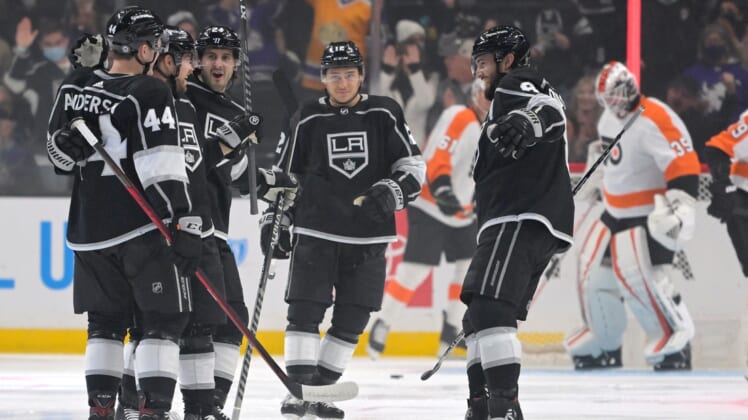 The LA Kings beat the Philadelphia Flyers 6-3 in chaotic and stressful fashion to extend their winning streak to two games.

This was the first game of 2022, and the Kings started the new year off right as they are now undefeated in the new year and hope to have many more games like this one throughout the rest of the year.

Three things that stood out

1. Quick start gets the ball rolling

Viktor Arvidsson scored 12 seconds into the game, tying Wayne Gretzky for the third-fastest goal in a game for the LA Kings.

This goal gave LA the momentum, and it managed to kick off the game correctly for the LA Kings. Scoring that quickly off of the opening draw with the perfect wrap-around was such a great move by Viktor Arvidsson.

Arvidsson, by the way, had an amazing game, but we will get to that later.

Arvidsson got himself a much-needed goal, as it boosted his confidence. Hopefully, now that he scored twice against the Flyers, he can net some more pucks because he deserves far more goals this season than he has.

That wasn’t the only goal scored within the first minute of a period, as Adrian Kempe sniped his team-leading 14th goal on the 5-3 power play 47 seconds into the second period.

The Kings got the upper hand to start the second period when Rasmus Ristolainen took an awful boarding penalty on Arvidsson at the end of the first.

The Kings wasted no time on the two-man advantage, and Kopitar fed Kempe with a sweet pass. Kempe sent that puck right over Martin Jones’ shoulder and gave the Kings a two-goal lead.

2. The second line combined for 11 points

Without a doubt, LA’s second line, consisting of Trevor Moore, Phillip Danault, and Viktor Arvidsson, was the best line in the entire game. Moore had 4 points, a career-high, Arvidsson had four points and two goals, and Danuault had three points. That’s a combined 11 points.

The line was on fire, and maybe it’s time to give Trevor Moore a more shot at a bigger role on the team. Maybe even give the Thousand Oaks native a chance on the first power play line? He was quick and nifty this game, and this was undeniably his best game as an LA King.

This pass to Phillip Danault, to make the score 5-2, was the standout play by Trevor Moore on Saturday night:

Phillip Danault continues to prove how he’s worth what he got in free agency. He’s been LA’s best defensive forward all season long, and now his offensive skill is starting to show off playing alongside Arvidsson and Moore.

Arvidsson has been a stud for the LA Kings, despite having a bit of tough luck with his finishing. He finally found the back of the net as he had two goals and eight shot attempts.

No matter how you feel about Todd McLellan, you can’t help but feel over the moon for the veteran coach, who hit 500 career wins as an NHL head coach.

McLellan has mixed up the lines in the past few games, and it looks like he’s found a good recipe. The first line looked active, the second line was on fire, the third line looked great despite the TOI, and the fourth line has been the best in the league.

McLellan has been the head coach of three NHL teams (the San Jose Sharks, the Edmonton Oilers, and the LA Kings) and was also behind the Detroit Red Wings bench from 2005 to 2008 as an assistant coach to Mike Babcock.

As the head coach of the LA Kings, McLellan has won 66 games. Congratulations to him on reaching such an honorable milestone in his long-lasting NHL career. Here’s to many more!

Congrats to Coach Todd McLellan on picking up his 500th career win as an @NHL head coach!@LAKings | #GoKingsGo pic.twitter.com/5sM0adP9pD

A win is always great, but a win to start off the new year is even better. The Kings will have a few days off before hosting the red-hot Nashville Predators on Thursday.