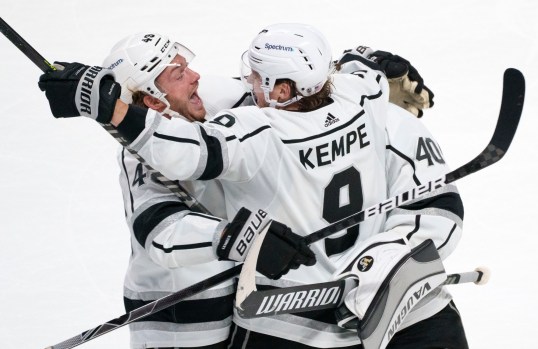 With players getting healthy, the LA Kings lineup becomes a question mark.

Peaks and valleys. That is the epitome of the LA Kings season thus far.

The first seven games weren’t kind to the Kings. With defensive anchor Drew Doughty (knee) out up to eight weeks and the puck-moving blueliner Sean Walker (ACL/MCL) to miss the rest of the season, they quickly found themselves in a 1-5-1 hole.

Things were looking bleak. And the Twitter “pitchforks and torches” were out, calling for change. But the Kings weren’t about to roll over.

With all the adversity facing LA, they have quickly turned their season around with a 7-0-1 record in their last eight games. Amidst all that, the Kings lost forwards Viktor Arvidsson and Gabe Vilardi to COVID-19 protocol and Lias Andersson to a lower-body injury for much of that stretch. An impressive feat of resiliency to right the ship with some key figures, not in the lineup.

Now, the LA Kings return home for a season-long seven-game homestand. Luckily for Head Coach Todd McLellan and General Manager Rob Blake, Arvidsson, Vilardi, and Andersson are all expected to be back and ready to re-join the team. But where do they fit now?

Usually, a team is desperate to return key pieces to their lineup. But for the resurgent LA Kings, it has become a luxury.

For much of the recent road trip, this is how LA lined up their forward group:

With Arvidsson, Andersson, and Vilardi all expected back, here’s how I’d line them up:

With Viktor Arvidsson unable to play, Adrian Kempe took his spot on the left side of the first line alongside Anze Kopitar and Dustin Brown. Unfortunately, it hasn’t quite worked out.

In just over 55 minutes of 5v5 time together, the trio of Kempe-Kopitar-Brown has a team-low 36.02 xGF% according to EvolvingHockey.com.

For Anze Kopitar and the struggling Dustin Brown to get going again, reuniting them with Viktor Arvidsson makes the most sense.

When together in the early part of the season, they have been very successful, garnering the sixth-best expected goals rate according to MoneyPuck.com and sixth-best shot percentage among all forward lines in the NHL with at least 75 minutes played.

With Adrian Kempe now available, returning him to his original spot on the second line with Phillip Danault and Alex Iafallo would seem to be a no-brainer. But, even with the early success those three had together, Andreas Athanasiou has taken that line to a new level.

Since being inserted into the lineup, AA has totaled five points (2g,3a) in five games and has brought a finishing touch to the bash brothers of Corsi in Iafallo and Danault.

Removing AA from that line would be a mistake.

There’s precedent here. And also a lot of speed and versatility.

Now Rasmus Kupari isn’t exactly lighting up the scoreboard for the LA Kings as of late, but he’s playing an excellent defensive game. Reuniting him with former Ontario Reign line-mate Lias Andersson could help ignite Kupari’s offensive output. As the two combined for some pretty goals last season in the AHL.

Adding a player like Kempe, who seems to thrive in an “Alpha” type role against opponents’ bottom six, could do wonders for that player’s confidence. And make him a consistent threat offensively.

Lizotte has been playing exceptionally well the last few games. He is leading the team in minor penalties drawn with seven and is driving play.

Paired alongside Lemieux since Brendan was inserted into the lineup, the duo has been one of the best forward combinations on the team, with 60.88 CF% on the ice together. And they’re the only pair yet to be on the ice for a goal against this season.

Trevor Moore also has shown he needs to be in the lineup with his constant forechecking ability and penalty-killing prowess.

At the end of games, the three may not find themselves on the scoresheet, but they provide energy and have the ability to wear out their opponents.

With those lines in place, Carl Grundstrom, Arthur Kaliyev, and Gabe Vilardi are left for the last two available roster spots.

From a pure asset management standpoint, Carl Grundstrom is all but a lock at this point to stay with the team. He would be the only one of the three to need to clear waivers to be moved to Ontario. Plus, I’ve been impressed with his play of late, and he could be an excellent rotational piece to have around.

I think it would be wise for the LA Kings to send Arthur Kaliyev down to the Reign. Though his bullet of a shot could warrant a reason for him to stay, continuing with him on the fourth line would be a mistake. Get him back to Ontario and keep that development thriving with some top-line minutes in the AHL.

Gabe Vilardi is still an enigma to Kings fans and management also. The flashes of brilliance give hope for a bright future for Gabe in the NHL. But that’s all it has been, flashes. Now could there be a chance to send him down to Ontario to re-gain some confidence? Sure. He is still waiver-exempt, after all. But I don’t see that being in the cards yet. I say, keep him with the team. And hopefully, that confidence will come to fruition on the ice.