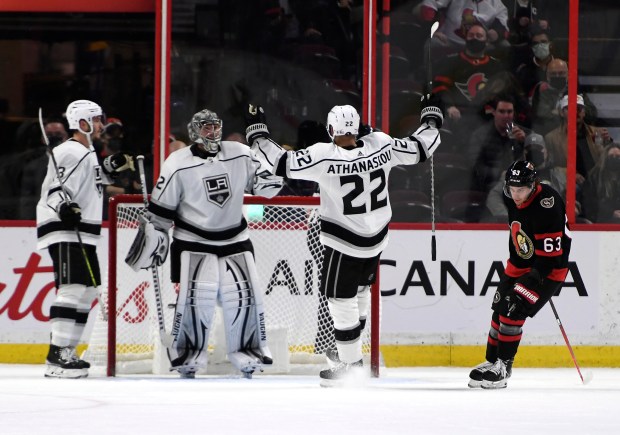 Three takeaways from the LA Kings extending their win streak to eight games with a 2-0 win over the Ottawa Senators.

Jonathan Quick and the LA Kings shut out the Ottawa Senators 2-0. The Senators were missing nine of their players due to Covid-19, but credit must be given to Ottawa as they battled hard throughout the game and made this win for LA five times more difficult. The 2-0 victory now puts the LA Kings on a seven-game winning streak, which continues their undefeated in the month of November.

Here are some takeaways from the game:

“Quick’s making it hard for Cal Petersen to become LA’s true number one goalie,” Alex Faust said, in the second period of Thursday’s game. That happens to be entirely true, too. Quick has been outstanding this season, and the win against Ottawa made it even harder for Cal. The season is still young, but it may be safe to say that the Kings have two number-one goalies sharing the crease.

Jonathan Quick continues to have an amazing season as he has his first shutout of the season. He bailed the Kings out a ton on Thursday as he had a 2.65 GSAx (goals saved above expected) and recorded 34 massive saves. The Senators pressured the LA Kings D-zone hard in the final few minutes and Jonathan Quick kept the door shut throughout and he got himself his well-earned 55th career shutout.

Quick now has a 1.98 GAA and a .935 save percentage after eight games this season. He has been on fire.

Despite getting a knee right to his head in the second period (clip below), Quick finished the game with a smile on his face and a chip on his shoulder.

Does this mean Quick is back to his younger form? Maybe. It is still early. One thing I can tell you for sure, though, is that Quick has been nothing short of outstanding and he stole Thursday’s game for LA. I expect the team to buy him a steak dinner after the big shutout win against Ottawa.

2. The Fourth Line turned some heads

I think every LA Kings fan was upset when they learned that Arthur Kaliyev was demoted to the fourth line a few games ago. But, it’s been shown that it doesn’t matter because the Kings stay winning. The fourth line, consisting of Brendan Lemieux, Blake Lizotte, and Arthur Kaliyev, had 12 on-ice shot attempts this game, which was the second-best on the team behind the second line of Alex Iafallo, Phil Danault, and Andreas Athanasiou, who had 14.

That fourth line was also first in Corsi for tonight with 63.2%. The next best line was the second with only 53.8%.

The line played hard tonight, and it was apparent. The three players have found chemistry, and it’s worked so far. Lizotte, Lemieux, and Kaliyev all had fantastic goal-scoring opportunities tonight, but give credit where credit is due. Opposing goaltender Filip Gustavsson held the Senators’ door shut for most of the game tonight. The line was also defensively responsible as they did a good job blocking shots and keeping the puck out of the net.

The LA Kings had an equal amount of penalties taken and penalties drawn with four of each. But, the Kings also had a 100% penalty-kill rate tonight. In all fairness, LA could have killed the final penalty better as Quick bailed them out a few times (and so did the post on a shot from Brady Tkachuk), but the important part is that the killers did their job, and they did it well.

It was pretty clear that the Senators didn’t have a good power play, but that doesn’t mean the penalty kill was bad. The forwards and defensemen held their spots and they managed to kill off every penalty the team took.

As for the power play, the Kings went 1-for-4 on it. The lone power-play goal turned out to be the game-winner, which captain Anze Kopitar scored after Ottawa defenseman Michael Del Zotto deflected his shot.

The assists on that goal went to Kale Clague and Adrian Kempe. That secondary assist that Kempe recorded on Kopitar’s goal now stretches his point streak to six games — now the longest career point streak of his 326-game career. As for Kale Clague, his primary assist continues to solidify his reasoning as to why he should not only stay on the team but also on the first powerplay unit.

Before the game against the Senators, the powerplay was struggling big time. They did, however, do very well on the man advantage even though they only scored once. They took many shots and had countless opportunities to score. As I mentioned earlier, though, Fillip Gustavsson stood on his head for Ottawa and made this game so much closer than it could have been if anyone else was in the net for the Sens.

The Los Angeles Kings furthered their winning streak to seven games against the Ottawa Senators on the night of Veteran’s Day/Remembrance Day and will head to Winnipeg to play the Jets on Saturday. The Kings now hold a lengthy winning streak which they will look to extend to eight games. Until then, though. let’s enjoy the seven games in a row that the Kings have won.