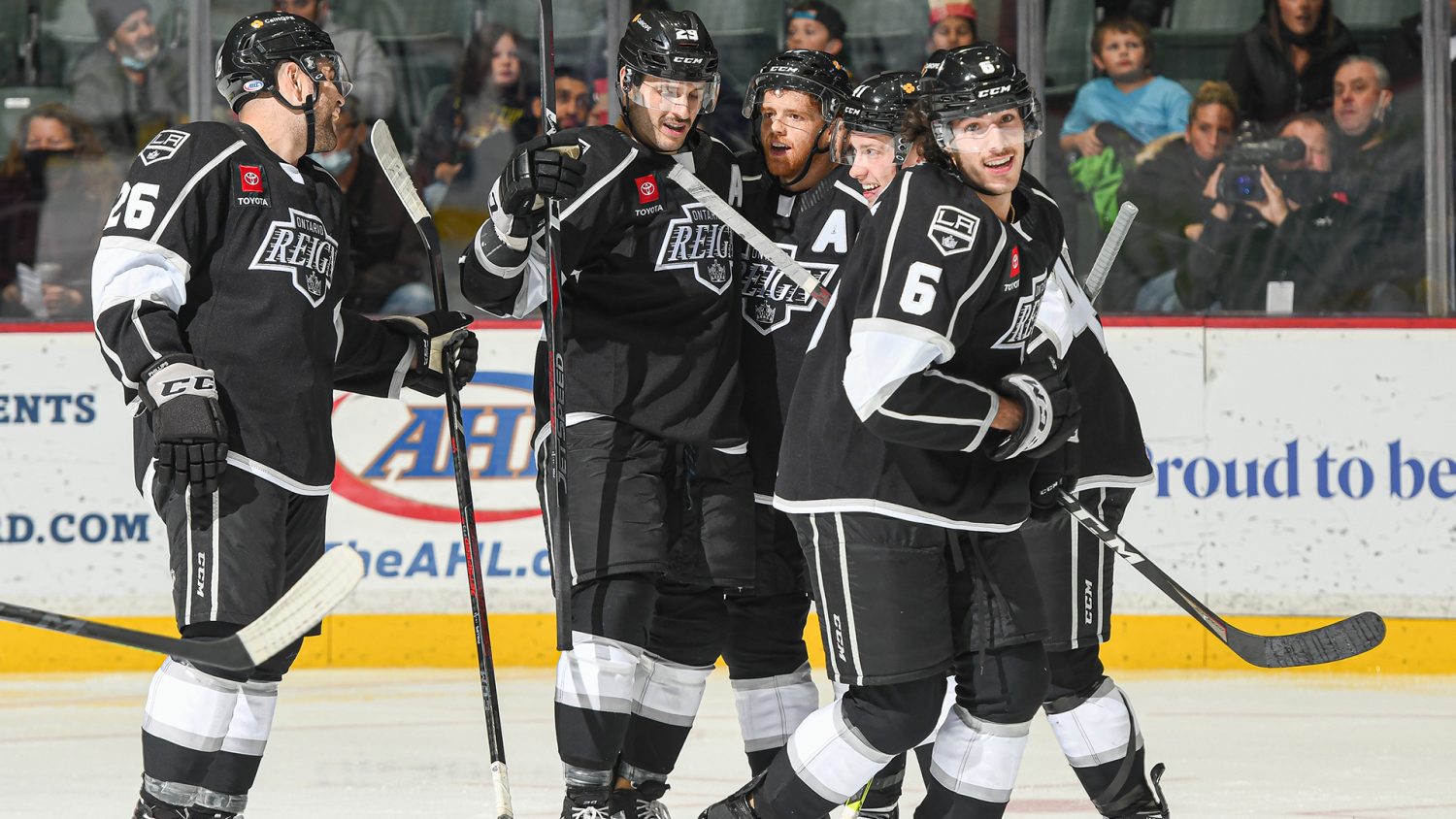 It was a dominant performance from the Ontario Reign as they improved to 5-0-0-1 after their 5-2 win against the Abbotsford Canucks.

Sean Durzi led the way with two goals and two assists. TJ Tynan added two more assists to his ledger, and Matt Villalta made 16 saves for his fourth win of the season.

Here is how the Reign lined up for their first road game:

The Reign were in control for most of the first period but were unable to convert on their two power-play opportunities or their numerous chances at 5-on-5. Ontario held a 14-6 edge in shots on goal and an 18-10 advantage in shot attempts.

Austin Wagner couldn’t convert on a clean breakaway. Prior to that, Martin Frk had this chance coming out of the box that was stopped by Arturs Silovs, who was very good in this game despite the scoreline:

A look at Martin Frk's breakaway chance as he came out of the penalty box earlier in the period. pic.twitter.com/UT4hNwaEi2

Jaret Anderson-Dolan had a golden chance from the slot, but he rang it off the post:

One of the many grade-A chances for Ontario in the 1st was a shot by Anderson-Dolan that hit the crossbar.

This is the video replay shown from above the goal. About as close as you can come to scoring but it stayed out. pic.twitter.com/rJbayuNGFK

Despite the dominant opening period, it was Abbotsford who would strike first with Sheldon Dries tipping in a Cameron Schilling shot:

Sheldon Dries’ beauty puts the #AbbotsfordCanucks on the board first! pic.twitter.com/DroMAtLFoJ

The second period was more of the same from Ontario. Aided by six Canucks’ penalties, the Reign outshot Abbotsford 15-4 in the middle frame, with a 22-7 edge in shot attempts.

Still, it wasn’t until the midway point of the period when the Reign would finally break through. Tyler Madden converted on the power play off a feed from TJ Tynan:

Tyler Madden(2) ties the game with a powerplay goal

Just over two minutes later, Johan Sodergran would give Ontario the lead:

Dries would answer back from an impossible angle, sneaking one past Villalta from behind the goal line:

HOW DID THIS GO IN⁉️

We don't understand this goal but we are happy about it. Does Sheldon Dries have a hat-trick in him tonight?#AbbotsfordCanucks pic.twitter.com/4LUPOzLzIQ

In the third, Durzi picked a great time for his first goal of the season:

Sean Durzi makes it 3-2 #Reign with his 1st goal of the season! pic.twitter.com/ZPZGgZk9st

The captain Brett Sutter took advantage of two Canucks players colliding to pick up his first goal of the season, giving the Reign a little bit of insurance:

After a late penalty, Tynan put one on a tee for Durzi, and he did not miss:

Durzi with his second goal and 4th point of the game! 5-2 #Reign

The two teams go at it again on Saturday night at 7 p.m. PT.