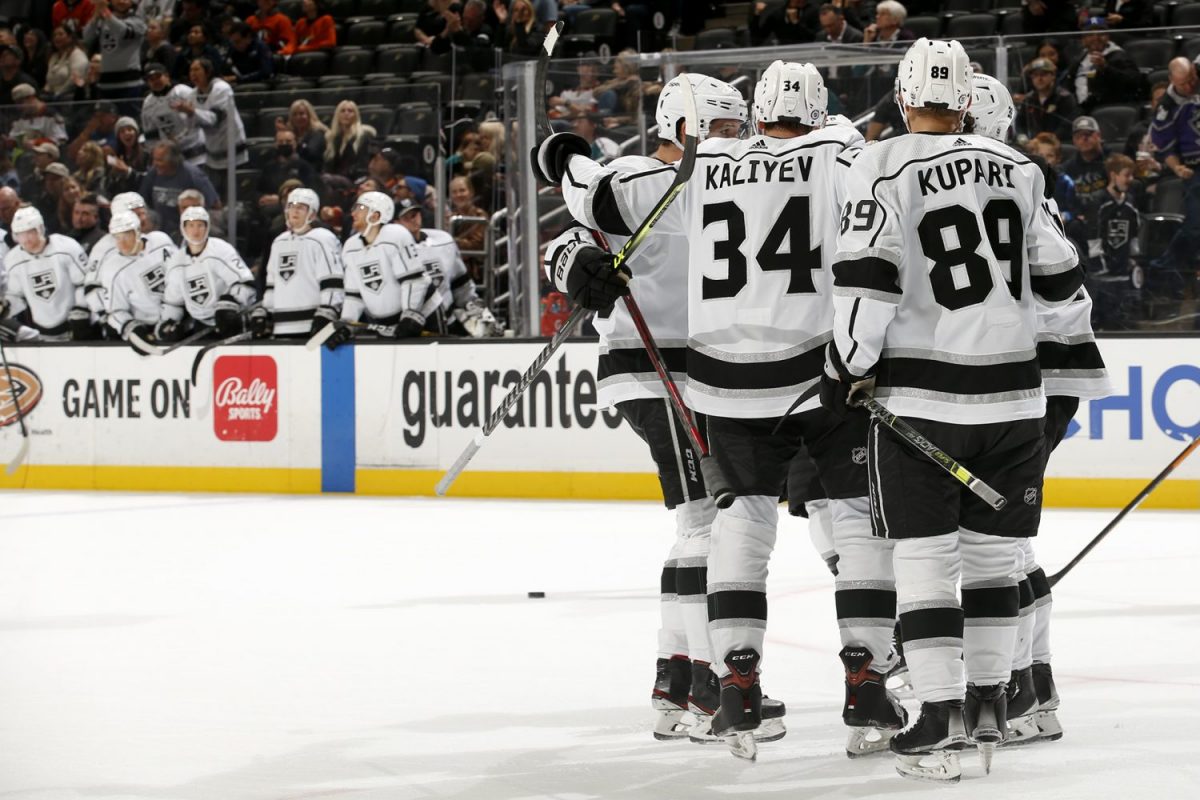 After spotting the Anaheim Ducks with an early 3-0 and being severely outshot in the first period, the LA Kings went to work. Trevor Moore chipped the puck up-ice to Austin Wagner, who turned on the jets and beat Ducks’ netminder Anthony Stolarz with a beautiful backhand shot with just under a minute remaining in the opening period. The goal gave the Kings some momentum heading into the intermission, despite being outshot 17-7.

“I thought that Wags’ goal at the end of the period was huge because we were down 3-0 and that one goal was huge,” Kaliyev said on Wagner’s goal being the turning point. “Having a two-goal deficit heading into the second, we kept the pressure on them and then we got rewarded with the goals. Todd [McLellan] was not happy after the first period, and we came out, played harder and more physical in the second and third.

There's more where that came from.

Austin Wagner makes it 3-1 at the end of the first period. pic.twitter.com/cyVBGZu8Gi

From there, it was the Arthur Kaliyev show, who was recalled to the roster before Wednesday’s game. The Kings’ 2019 second-round pick helped lead an odd-man rush up-ice along with Carl Grundstrom and Alex Turcotte, and it initially appeared that Los Angeles would get a goal from this.

Stolarz denied Turcotte, but it was enough to get the Ducks’ netminder frazzled a bit as Turcotte gathered the puck and dished the puck out to Mikey Anderson at the blueline. The Kings’ defenseman fired a shot on net, and Arthur Kaliyev redirected the puck into the back of the net to make it a 3-2 game, with just under 12 minutes to play in the middle frame.

They don't ask how, they ask how many. @Arthur_Kaliyev makes it 3-2. pic.twitter.com/JGkDkEuyHi

Then with the Kings on the powerplay and under two to play before the second break, Christian Wolanin fired a shot toward the net. The puck bounced off Stolarz to a waiting Kaliyev, who sniped it into the back to tie the game at three goals apiece.

Moving into the final frame, the Kings found themselves on another powerplay with just under four minutes gone by. Jaret Anderson-Dolan carried the puck toward the net before sending it through the slot to Kaliyev, who dished it to Alex Turcotte in front of the net.

After an immediate save by Stolarz, Turcotte buried the rebound home to give the Kings their first lead of the game, despite being outshot 31-20 at the time. The duo of Turcotte and Kaliyev was buzzing all night, just as they were in the 2021 World Juniors.

“It was awesome. I’ve been playing with and against him since I was 10 years old. It’s been pretty good so far. I like playing with him. I think we have good chemistry since we know each other so well. Hopefully, we can keep it up. It was really nice [to see him rewarded]. He was working hard the whole game, winning battles and playing good d-zone,” Kaliyev said of Turcotte.

The Kings’ goal party continued with just over two minutes to play in regulation. After some chaos in front of the Ducks’ goal, Brendan Lemieux buried a rebound for his second preseason goal. And finally, just under 1:30 to go and an empty Ducks’ net, Carl Grundstrom broke up a pass, deflecting to Kaliyev, who skated the puck to mid-ice before sending it into the open net and completing the hat trick.

Kings are back at it on Saturday, hosting these same Ducks with puck drop set for 7:30 pm PT.

LA Kings: Quinton Byfield will be out indefinitely with a left ankle fracture