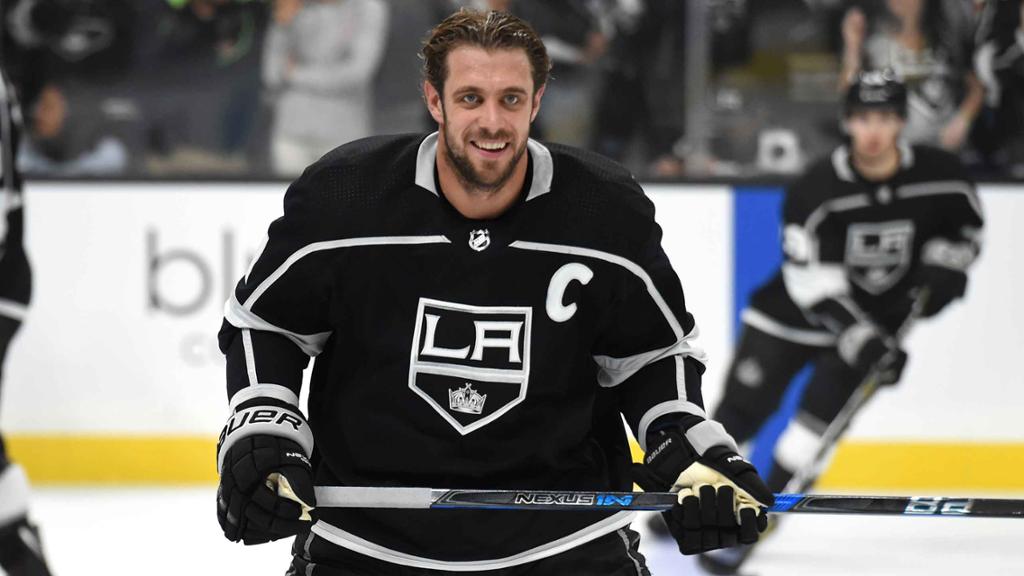 With the regular season inching closer, LA Kings captain Anze Kopitar spoke to the media about his excitement.

It’s been another long offseason for the LA Kings but not from the dread of last season so much as it was for the anticipation for this coming season. After some key offseason acquisitions to some of the organization’s future stars getting closer to cracking the big club’s roster, the LA Kings certainly have some good reasons to feel excited about the 2021-22 campaign.

Of course, while the club is excited for its future, that veteran presence is no less important. Of the latter group is the club’s captain, Anze Kopitar, who spoke with the media on Monday about the palpable excitement from him and his team about the new season. The veteran is even optimistic about the Kings’ chances against a heated divisional opponent.

While the 2020-21 season wasn’t much to write home about from an overall point, the silver lining (pun intended) for the Kings was their impressive performance on the penalty kill. Last season, the silver-and-black finished tied for sixth overall with the New York Islanders in said category with an 83.4 percent rating.

“There’s obviously a whole bunch of pieces that go into that, starting out with good with pre-scouts and Trent [Yawney] doing all the video work and putting the game plan together, and then us going on the ice and executing that stuff,” Kopitar explained on Monday. “You’re playing better against certain teams and certain teams give you a little bit more trouble, so it’s just getting out there, knowing what you’ve got to do and what the other team’s strengths are and try to limit time and space.”

Unlike in previous years, Kopitar hasn’t played much in the preseason thus far. The Kings’ captain was asked if he communicated any sort of request to limit the amount of games he plays in, whether preseason or regular season.

“Well, that number obviously came down a bit with age,” the 34-year-old said of his decreased number of games played this month. “I’ve talked to Todd [McLellan] about it and three or four years is usually the magic number for me; and then having to play already the qualifiers– I know this was a month ago but those are still three games that I’ve played already and I think, obviously, two more for me would be good.”

Of their plethora of incentives to feel excited, the Kings have their No. 2 overall pick from 2020 waiting in the wings for his shot to be a full-time NHLer. However, what looked to be a lock for Quinton Byfield at first hasn’t looked as promising since. While still performing decently during training camp and preseason, the 19-year-old may not be quite as ready for the NHL as some may have anticipated. And certainly, his injury on Monday puts his immediate playing time in question.

Kopitar has been one of the many observing Byfield’s game, and he shared his thoughts about the former Sudbury Wolf.

“He’s still a young buck, so there’s still a little bit of a learning curve that needs to go on,” admitted the Kings captain. “But, I think from last year, he’s learned a lot. I think, however many play games he played last year, helped him out to see how everything is working around here and what he needs to do and stuff, so I think he’s had a good summer. He definitely looks stronger, so that’s obviously a very positive side of things, and I think he looks a little bit more comfortable on the ice than he did last year.”

Kopitar, however, did not go without broaching the subject of his team’s fierce divisional rivals in the Vegas Golden Knights. Overall, the Golden Knights are 11-8-2 against their SoCal rivals — 15-8-2 if you include the playoffs — but when asked if he feels confident that the Kings can turn a corner against their Sin City adversaries, the Slovenian veteran was quick and honest.

“Yeah,” Kopitar emphasized. “I mean, you look at our roster this year, I think it’s definitely improved from last year. It’s hard to say this last game that I was playing because we didn’t have the full squad, but yeah, very, very encouraging for us to have the roster that we have right now and going into the season, we should be and we are very excited.”

It’s all in, full steam ahead, whichever cliche you want to use. The fact is is that the LA Kings are ready for the new season to begin. That is especially the case with Anze Kopitar leading the charge. So, while he may be a step or two slower than he once was, the silver-and-black’s No. 11 hasn’t lost an ounce of his unwavering leadership — something that will carry the Kings to the next level in their ultimate re-ascension to glory.