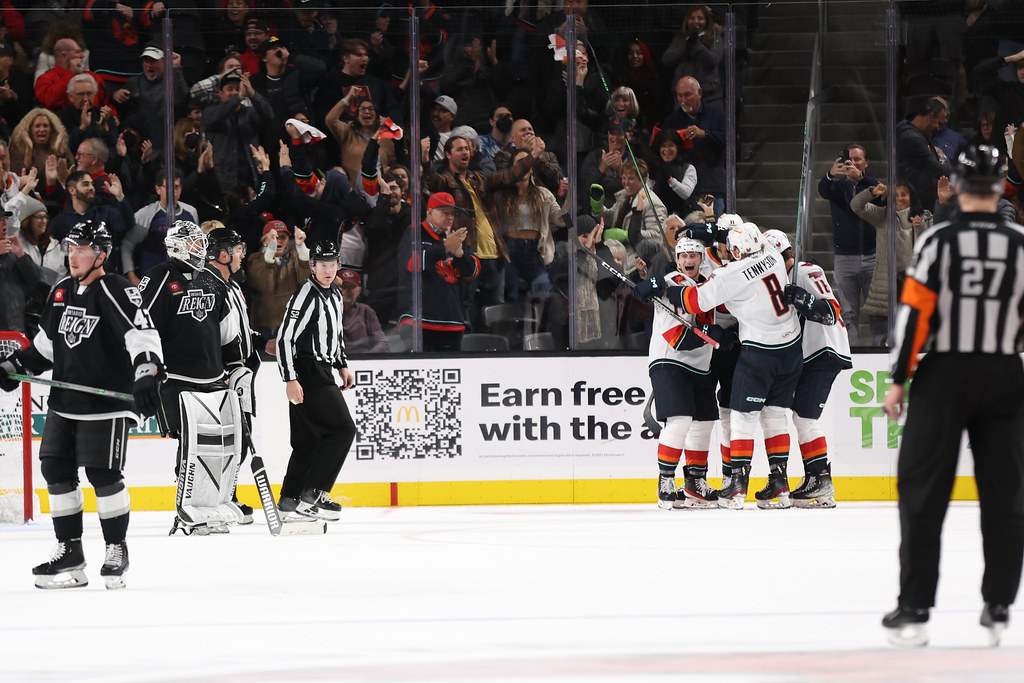 The Ontario Reign had a 5-2 lead but eventually fall to the Coachella Valley Firebirds in a wild 7-6 loss on Wednesday night.

What a great play by @Turcotte__71 on the Power Play#ReignTrain pic.twitter.com/N9V0nBTye0

the reign is losing a little choo in their train in the 3rd period pic.twitter.com/cnHOhLSYxF

The Ontario Reign is generally a team that can survive getting peppered with shots, but the Firebirds were too precise for the Reign to keep up. By period, Coachella Valley shot 18%, 15%, and 21% (rounded to the nearest integer). This consistency means that in general, they scored once every 6 shots. That’s not a good way for the Reign to try and win games, even though the Reign were technically shooting a bit better than the Firebirds. The Reign have been giving up a lot of shots lately, over 100 in the last three games, and cannot hope for this kind of play to carry them forward to the next stretch of the season.

After the departure of long-time Captain Brett Sutter (quick shoutout to Sutter on his recent 1,000th game milestone), the C on the jersey was passed to two-time league MVP TJ Tynan. It’s safe to say that after his first 26 games as captain, Tynan is carving out his own place in Reign History.

Love to ~C~ it … he ha he, too many goals we're running out of jokes#ReigTrain pic.twitter.com/Xm3i0WJs4G

Tynan has continued his sensational assist record, tallying 109 assists in his last 88 games, and contributing 17 goals as well. Tynan has been held off the scoresheet 10 times this season, meaning his current season total of 25 assists has come in only 16 games thus far. His ability to read a play and let it develop naturally gave him his one-goal and two-assist night in a game the Ontario Reign probably should have won. Leadership is more than just points, it’s putting the team first, it’s saying “we can do this”, and it’s developing a way to carry the morale of the team. Tynan does it masterfully and was the obvious choice for the Captaincy of the Reign.

Is it time to worry about the crease?

Concern is the best way to put how fans probably feel about Cal Petersen’s future in the LA Kings organization. He is signed through the 2025 season at a cap hit of $5,000,000 per cap friendly. This contract also, notably, carries a modified No Trade Clause. Petersen’s clause is his submission of a 10-team no-trade list to the team. In his first couple of outings for Ontario, Petersen looked great, putting up a 5-1-0 record and allowing only eight goals on 151 shots, giving Petersen a .947 save percentage over the six games. However, over the last two games, Petersen has allowed 11 goals on 68 shots for a .860 save percentage.

This is fairly in line with how he had been playing with the LA Kings before he was sent down to Ontario. Unfortunately, this does not bode well for the future of the LA Kings organization. Pheonix Copley has a 7-1-0 record since his call-up, and he seems to be taking the crease in Los Angeles away from Petersen. The issue, of course, is that Copley is 30 years old and his contract expires at the end of this season. With Jonathan Quick not looking like he is going to retire, decisions will need to be made about goaltending in Ontario and in Los Angeles over the next year or so.

The Reign are back at it against the Calgary Wranglers on New Year’s Eve. The game starts at 6 PM PT and can be seen on AHLTV. See you there Reign fans!