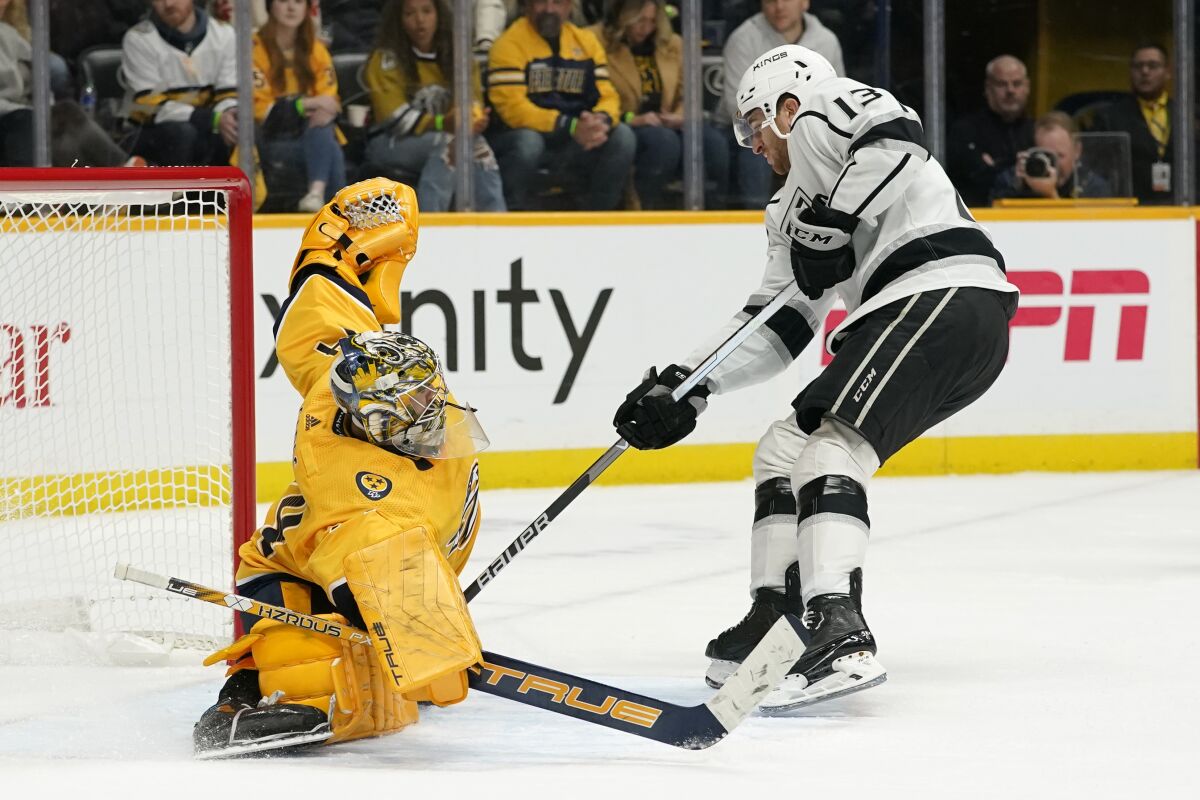 The LA Kings stormed back from a two-goal deficit in the third period, eventually taking the game in the shootout behind solid performances from Matt Roy and Cal Petersen.

The sweet, sweet sounds of a Matt Roy goal 🔊 pic.twitter.com/SUjFoBj52E

Three takeaways from the contest

Gabe Vilardi has been one of the best stories of the young season. Between the time spent in the AHL converting to a winger and the work put in over the summer, the 23-year-old has looked like a completely different player. Vilardi evened the score in the second period on the powerplay, re-directing an Arthur Kaliyev shot that got past Juuse Saros.

Credit the coaching staff for using Vilardi’s size and strength to put him in front of the net on the man advantage this year. We saw that implemented in the preseason and its effectiveness. Thus far, it’s translated into the regular season. Vilardi is tied with Adrian Kempe for a team-high four goals through the first five games.

He also had the lone tally in the shootout round, giving the LA Kings their third win of the roadtrip thus far.

2. Cal Petersen shines when team needed him most

In the first year of his three-year contract extension, it was important for Cal Petersen to prove his ability to be a No. 1 goaltender. The 28-year-old allowed six goals in his first start of the season against the Wild on Saturday, but he had a much better showing on Tuesday. Two of his three goals allowed could perhaps be defined as bad goals, but the fact of the matter is that Petersen came up big down the stretch when he was called upon.

The Kings netminder made a couple of big saves to close out regulation and denied Matt Duchane on an amazing save in overtime. In the shootout, he kept the Predators off the board. After Petersen stopped Roman Josi to seal the win, he was visibly amped up.

“At the end of the night, he had to make outstanding saves in overtime, and he was excellent in the shootout, and he’s won two games for us,” Kings head coach Todd McLellan said of his goaltender. “So, for as much it’s been talked that he’s got to find his game, he’s won two twice, and that’s a real good thing. I think he started to settle in.”

Hopefully, that does wonders for his confidence going forward, and Los Angeles can feature more of a 1A and 1B goalie as they had hoped last year before Jonathan Quick eventually took the lion’s share of duties in net.

To wrap up this item – a really outstanding performance from No. 40 between the pipes on Tuesday.

What if I told you that Matt Roy tied his goal total from last season in the third period alone?

In all seriousness, what a game from Matt Roy. The Kings were struggling to get anything past Saros. However, in a play that started in their own zone, Matt Roy and Brendan Lemieux teamed up in a rush up-ice, with the latter firing a puck toward the net just as Roy arrived to bang it home with seven minutes left in regulation.

Then with just over two minutes left to play, Gabe Vilardi kept the offensive zone and found a streaking Roy in the low slot for a wrist shot past Saros, tying the game at three goals apiece.

MATT ROY'S SECOND OF THE NIGHT SENDS US TO OT‼️ pic.twitter.com/llWvIHIZwQ

“It’s not often that we’re talking about Matt scoring two to tie the game in the third period, but he has that ability,” McLellan said. “He’s got tremendous legs, he’s strong, he went to the net, and he knows the score, he can gamble a little bit more, and he did a real good job. Big night for him.”

Roy has three goals in five games this season. He had two goals in 67 games a year ago.

This game was littered with penalties, and it’s easy to overlook them, considering the end result. However, the Kings went just 1-for-8 on the man advantage.

The LA Kings (3-2-0) roadtrip rolls on with a visit to Pittsburgh on Thursday night.