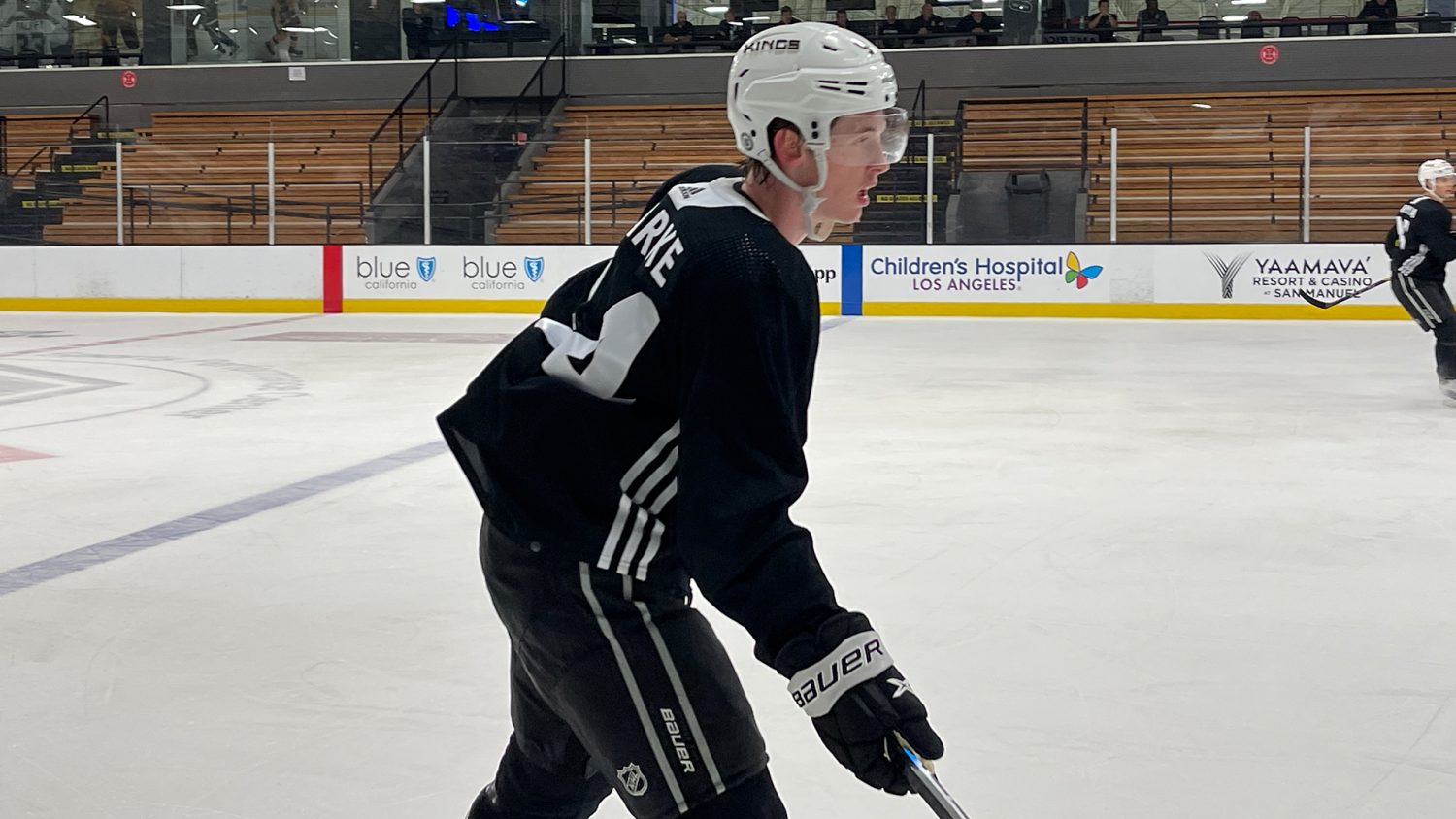 Over the last couple of seasons, the LA Kings have seen an influx of young prospects make their NHL debuts. They will have another in 2021 first-rounder, Brandt Clarke. The 19-year-old has reportedly made the team’s 23-man roster for Opening Night.

To this point, Clarke’s resume has been impressive. In addition to being taken eighth overall, the young blueliner captained the Barrie Colts for the 2021-22 season and paced all skaters with 59 points. He suffered a season-ending lower-body injury in late April, but he came into camp 100 percent healthy.

Now it boils down to the coaching staff putting him in the right position to succeed out of the gate, which could see Clarke potentially make his NHL debut on Tuesday against the Vegas Golden Knights.

Fortunately, the LA Kings are well-equipped to mentor the young defenseman.

“I think we have some experience on our staff,” Kings GM Rob Blake said to the media on Monday. “I think Trent Yawney has done a terrific job with some young D and the different organizations he’s been in, so we’ve relied on his help on that. Jim Heller went through the situation with the young D on the Islanders a couple of years ago. So basically, it comes down to making sure when he does get in a lineup, he’s going to get the right amount of minutes to keep developing.”

Clarke was one of the best players at the Rookie Faceoff in San Jose. He carried that over with an outstanding training camp and preseason, recording primary assists in each of the Kings’ first two exhibition contests. Aside from his offensive capabilities, the young defenseman opened a lot of eyes with his ability to escape a heavy forecheck in back-to-back games.

The Nepean, Ottawa native can play in nine NHL games before the Kings brass is tasked with the decision of starting the clock on his entry-level contract or sending him back to the OHL. Needless to say, those nine games will be critical to whether Clarke stays up with the NHL club all year. He’ll need to prove that the moment isn’t too much for him.

“I think his play through rookie camp and training camp put him to a level where we want to see him in the NHL and that kind of went into the decision process. But now the step is to make sure that it keeps going that way, and we’ll let that play out here the first little while and probably have to reevaluate again,” Blake added.

Clarke’s ability to quarterback the powerplay was one of the areas of his game that stood out the most when the Kings selected him eighth overall. His ability to play in all situations will play an important role in his longevity while exposing him to a number of scenarios in the National Hockey League.

“I think he can play in all situations, use him a lot on the penalty kill, which can give you an opportunity to get the minutes needed to keep developing at the NHL level,” Blake said on the decisions that went into Clarke making the roster out of camp. “The powerplay, obviously, you see the deception and his hockey IQ in that. But also defending, good in his sense. He’s gonna have to learn to protect himself a little bit more. Guys are bigger and stronger at this level than in junior.

“But I think the all-around game, there’s a lot of aspects that would allow a player, when he does get in a lineup in the regular season, to maintain those minutes that are going to help progress.”

Aside from managing Clarke’s minutes, the LA Kings already have a log jam along the right side of their blueline.

While Blake indicated over the summer that Sean Walker could be an option along the left side, if needed, Los Angeles has three more-than-capable players in Drew Doughty, Matt Roy, and Sean Durzi, who will all command ice time.

However, Clarke could be forced to adapt to playing on his offside, something he’s done before.

“We’ve tried quite a few over there,” the Kings GM said. “Sean Walker has played there at times. I think we gotta get him comfortable coming back from knee surgery before we experiment again with the left side. Sean Durzi, you saw the last game slide over there and made that transition really easy. And we’ve used Brandt Clark a couple of times over there. So the availability to open up that left side within our defense can increase getting Brandt in the lineup and getting the minutes he needs.”

It’ll be interesting to see how the Kings manage everyone’s minutes. We’ll get our first look at the lineup structure on Tuesday night.