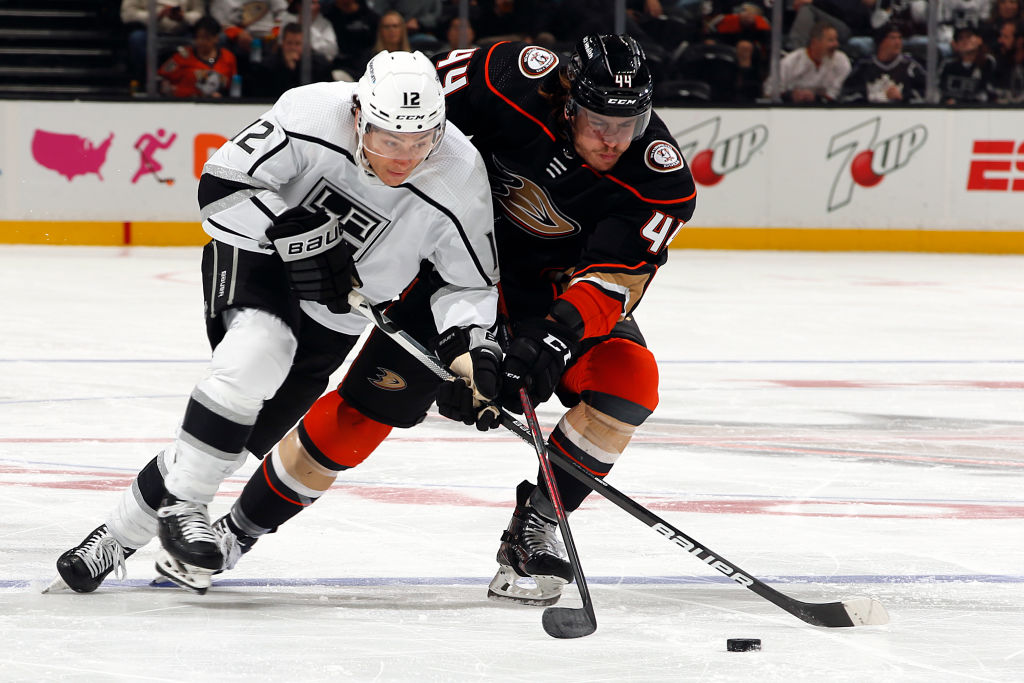 The LA Kings dropped Tuesday’s preseason game to their division-rival Anaheim Ducks 5-4. In what was largely a back-and-forth event, the Kings held a 4-2 lead with under eight minutes left in the second period, but they saw their lead evaporate as the Ducks took the lead for good less than one minute into the third period.

Three takeaways from the game:

Confidence has primarily seemed to be an issue with Vilardi through his first three NHL seasons. He got off to a positive start in Tuesday’s contest, scoring the first two Los Angeles goals. The first came on the powerplay with just under nine minutes left in the opening period. The Kings did a great job of quickly cycling the puck around, with Adrian Kempe firing a shot on Anthony Stolarz, who couldn’t corral the puck. Vilardi had established his position in front of the net and was there to bury the puck home.

His second goal came early in the second period after Ducks’ Dmitry Kulikov failed to retain possession of the puck while attempting to get it out of his own zone. Vilardi provided an excellent backcheck to grab the puck, turn, and fire his shot on net that beat Stolarz again.

“I’m playing the net-front, moving around, I’m just kind of reading off them, and I’m trying to find open areas back door kind of like I did on the first goal there. Yeah, I’m comfortable there, just kind of tapped into them and just trying to get open on that back side,” Vilardi said after the game.

“Well, one, it looks like he’s having a lot of fun, and I think that’s a huge part of it, so give him credit for being enthusiastic and being excited, and his teammates love playing with him right now that’s a real good sign,” Kings head coach Todd McLellan added. “The way he’s using his body to protect pucks and keep plays alive. Power play, we’ve given him a bit of a new role, and he’s accepting of that, and he seems to be in command of it. There’s a lot of positives from Gabe.”

Through the first three years of his career, we’ve seen glimpses of what Tobias Bjornfot can do on the offensive side of the puck. Last year, in particular, I thought he was more noticeable in that department, carrying the puck down low, attempting several wraparound attempts. However, on Tuesday, we saw Bjornfot rocket a puck home in open ice.

The Kings dumped the puck into their offensive zone, with Lias Andersson providing chase. The Ducks corraled the puck, but a rushed clearing attempt put the puck right back on Matt Roy’s stick at the blueline. With the Anaheim defenders all out of position, Roy dished the puck over to Bjornfot, who could have made a sandwich before firing the puck into the top right corner of the net.

We knew that going into this season, Cal Petersen needed to prove that he is the future of the LA Kings in net, with Jonathan Quick entering his final year under contract. Concurrently, Petersen is in the first year of his three-year contract extension, one that is paying him a considerable $5M AAV.

Certainly, the Kings had a couple of golden opportunities to tack onto their 4-2 lead in the second period, with Grundstrom denied point-blank and Kopitar drawing iron with less than six minutes to play.

And that’s when things started to shift back in the Ducks’ favor.

Into the third period, the Ducks took the lead for good, with Frank Vatrano’s goal above the right dot getting past Petersen. Looking at this one a bit closer, this is one that Cal has to stop.

The LA Kings will travel to Salt Lake City, Utah on Thursday to face the Vegas Golden Knights, with puck drop set for 6 pm PT.