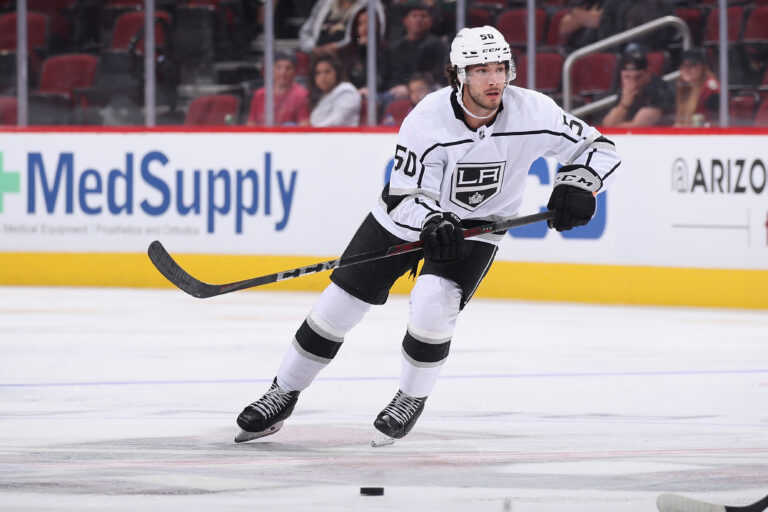 With training camp starting Thursday, we are previewing each player on the LA Kings roster. Up next: Sean Durzi!

Drafted: 2nd round, 52nd overall in the 2018 NHL Entry Draft by the Toronto Maple Leafs

After dominating in the AHL with the Ontario Reign, Sean Durzi was called up to the LA Kings after some injuries and did not disappoint. He was a point-per-game player early on and then got comfortable with the defensive side of his game. Offensive, gritty, and physical describes Durzi and his 2021-22 season. After debuting, he established himself as a go-to defenseman with the ability to step up when needed.

He played with an edge that took some people by surprise because of his stature. Durzi filled the vacancy due to injuries nicely and became the top offensive threat from the blue line. Durzi was also able to quarterback the power play and did not look out of place.

Durzi has good speed, a nice wrist shot, and can play in any situation. He made his presence felt every time he stepped on the ice and, by the end of the season, looked like a veteran defenseman in his rookie year instead of a newcomer.

His poise showed in this pass to Martin Frk in one of the top moments of the LA Kings’ season:

Durzi and his role on the team could change, despite the fact he comes into the 2022-2023 season with a new contract. With a surplus of right-handed defensemen, he could be shuffled to the left side to make things work. Regardless of what happens, Durzi should be better this season with a year in the NHL under his belt. Look for him to be more polished and ready to take over the top offensive defensemen sooner than later.

With Durzi entering his second season, he could become a key part of the defense. He can play on any pairing and on the right or left side. Being that versatile could come in handy if injuries pile up like they did last season. He will be one if not the best offensive defenseman on the team by the end of the season.