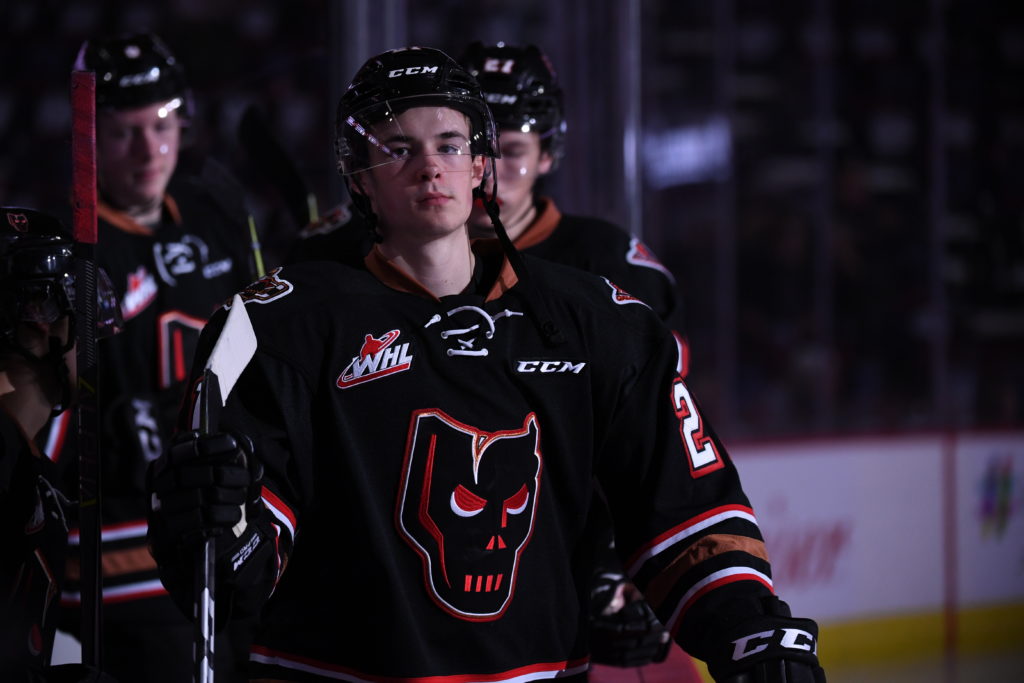 The new season is fast approaching as the LA Kings are in full preparation for the 2022 Rookie Faceoff, which begins a week from today.

Representing the Kings are a number of familiar faces like Quinton Byfield and Jordan Spence in addition to a slew of the club’s recent draft choices. Brandt Clarke and Francesco Pinelli are among just two in the latter category. However, the silver-and-black will have some new faces in the form of camp invitees.

Among them is 20-year-old forward Riley Fiddler-Schultz.

Coming off a fantastic 2021-22 campaign for the WHL’s Calgary Hitmen, Fiddler-Schultz registered 69 points (28 goals, 41 assists) in 65 games. Additionally, the season saw Fiddler-Schultz don a letter as one of his club’s alternate captains.
I recently spoke with Hitmen assistant coach Matt Stajan, who discussed Fiddler-Schultz’s game and how he thinks he will fare at the Kings’ upcoming rookie camp.

“Well, Riley is a complete player. His confidence really shined through last year,” noted the former Maple Leaf. “He was given a big role on our team, was one of the leaders, and he drove play. He takes a lot of responsibility in all three zones. At the same time, his shot has improved, his playmaking abilities have improved, and it’s something he keeps working at.”

The LA Kings have announced their roster for next week’s Rookie Faceoff in SJ.#GoKingsGo #RookieFaceoff pic.twitter.com/pGxyNIlakc

One common adjustment in the major-junior ranks is the subject of professionalism. How these young players carry themselves is critical. A significant part of that is the youngster’s attitude with their team’s coaching staff and building on whatever constructive criticism, and praise, they are dealt with. Fiddler-Schultz has excelled in this regard.
“He’s been great to coach,” Stajan beamed of Fiddler-Schultz. “He’s a very coachable player. A team-first guy willing to play any role. He plays both special teams and plays big minutes, but he’s always eager to learn, to get better. He’s always the guy that wants to stay after practice and work on his faceoff. He’s a student of the game, he loves the game, and he puts a lot of his time into it.”

As for his forward’s upcoming trek to California, Stajan is confident.

“I think he’ll fit right in,” said the Hitmen assistant. “He’ll fit right into the [Kings rookie] camp. He works hard. He’ll never have a lack of work ethic. He will always want to learn and he’s got a good head for the game. He’s a smart player.”

As a 15-year NHL veteran, Stajan has that experience of what it takes not only to make the highest level, but to succeed at it. After all, his 413 points in 1003 games can attest to the latter. It’s something that has resonated with Fiddler-Schultz.

“He knows where to go and, at the pro level, those are the things that separate guys: the guys who think the game the best and know where to be on the ice and what areas to go to,” Stajan explained. “He definitely has that. I have no worries for him going to a [rookie] camp, fitting right in and continuing to make improvements to his game.”

The annual Rookie Faceoff is a sign that the new NHL season is right around the corner. So, while fans certainly struggle to contain their excitement, the same can be said for the players. That goes especially Riley Fiddler-Schultz, who will use this new experience to make his mark for said exhibition, which will take place in San Jose.

Many are eager to see just what the future of the LA Kings holds. So, only time will tell just what Riley Fiddler-Schultz and the rest of the participants have in store.

Fiddler-Schulz and the Kings rookies will kick off the Rookie Faceoff against the freshmen of the Stanley Cup champion Colorado Avalanche. The puck drops at 2pm PST at San Jose’s brand new Tech CU Arena.