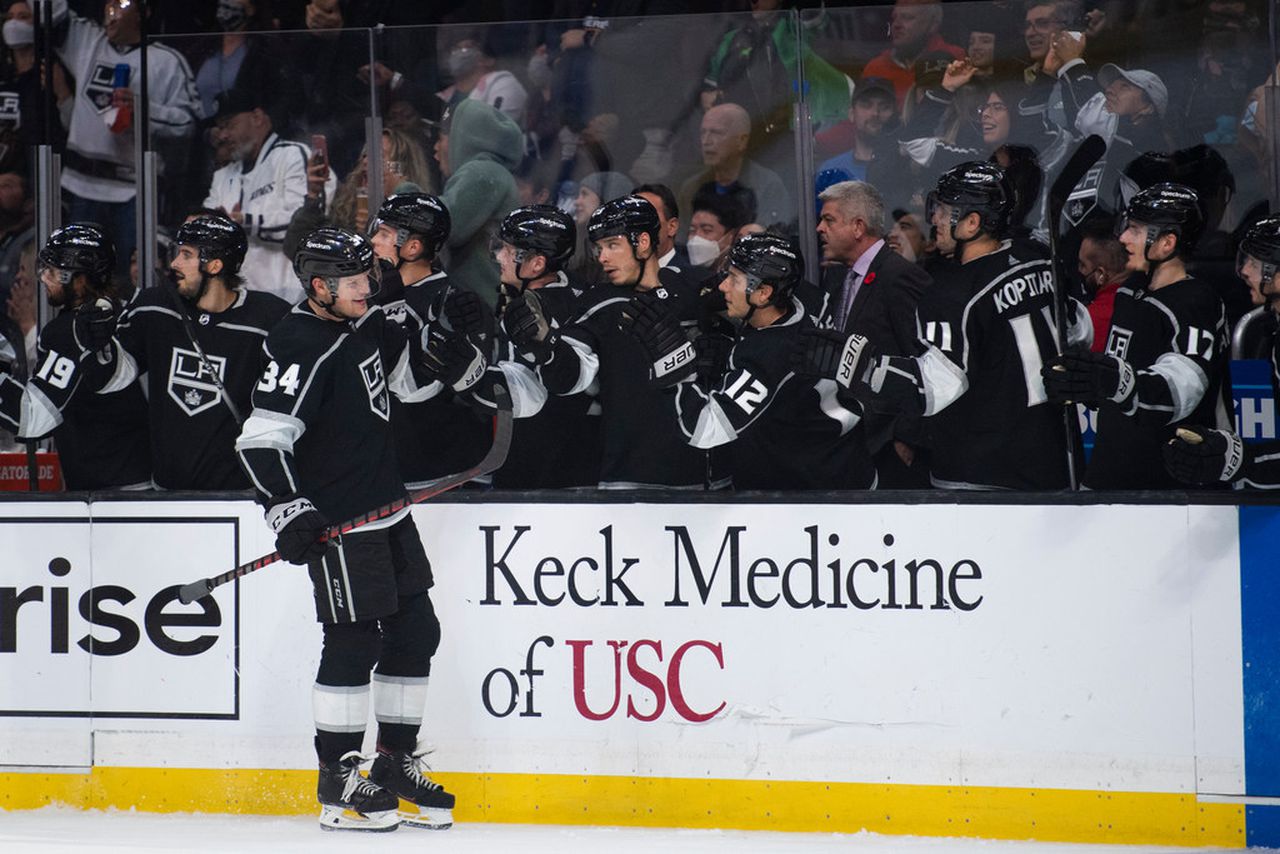 When the LA Kings committed to their rebuild, they said goodbye to several key members of the 2012 and 2014 Stanley Cup teams and said hello to high draft capital and promising prospects.

Arthur Kaliyev was an intriguing prospect the Kings added to the prospect pool in 2019. A first-round talent, the young forward slipped into the second round because the primary knock on him was his skating or lack thereof.

The numbers were certainly there: 14 goals and 13 assists for 27 points while primarily playing on the Kings’ fourth line.

Kaliyev developed tremendous chemistry with Blake Lizotte and Brendan Lemieux in what was dubbed “The Energy Line.” The trio accounted for a 56.3 xGF% in 315 minutes TOI (MoneyPuck).

However, entering this year, Kaliyev figures to have an expanded role and is an early candidate to flank Quinton Byfield on the Kings’ third line, with the hope that the two can form a modern-day Anze Kopitar–Dustin Brown-like duo. That’s the goal anyway.

Coming out of the draft, Kaliyev possessed one of the best shots in his class, but he didn’t have as many opportunities as maybe he should have last year playing on the fourth line.

In fact, he had the lowest shooting percentage of any Kings forward who logged at least 1,000 minutes TOI.

Of course, if he’s elevated in the lineup this year, that shooting percentage figures to increase.

Although limited to just under 67 total minutes TOI across 39 games, when Byfield and Kaliyev were on the ice together, they accounted for a robust 63.8 xGF%, including a 68.8 HDCF% in 5-on-5 situations (NaturalStatTrick), which certainly stemmed from their playing time together in the AHL.

Both players can collectively grow together in their development next year while giving the Kings added scoring threats from the bottom of their lineup. That would be a big win for the players and the organization.

While Kaliyev’s shot will always be his bread and butter, rounding out the rest of his game will go a long way toward reaching his full potential. We saw plenty of flashes of it last year, with particular emphasis on his net presence.

Whether it be even strength or on the powerplay, Kaliyev used his big body to obscure the goalie’s vision, and he was there for rebound opportunities.

A perfect example of that came against Detroit last year. Here he initially calls for the puck when Lemieux has possession of it down low. When the latter dishes it out to the point, you see Kaliyev establish his position in front of the net.

Austin Strand fires it from the blue line through plenty of traffic created by Kaliyev, who is there to bury the puck after the goaltender was unable to corral the puck.

He had goals similar to this one against Anaheim and Seattle. Overall, six of his 14 goals came from just outside of the crease, an area of Kaliyev’s game that really shined, especially in the second half of the season.

If he can continue to do this for the entirety of 2021-22, the goals should come a little more frequently.

Of course, Kaliyev will likely have an integral role on the powerplay. He tallied six goals on the man advantage last season, finishing second to Trevor Zegras for most powerplay goals among NHL rookies. Despite the preference to play on his off-wing, most of Kaliyev’s shots on the powerplay came from the left side.

At any rate, Kaliyev’s shot was on full display in this particular play. Here, the Kings win the faceoff, and the puck is cycled back to Matt Roy at the blue line, who dishes it off to Kaliyev, who is providing support with a Ducks player closing in on the Kings defenseman.

Kaliyev walks the puck in, picks a corner, and lets it rip, finding the back of the net as the goaltender was well-screened.

Going into 2021-22, Kaliyev will be a key piece to getting the Kings’ powerplay back on track. Whether new assistant coach Jim Hiller utilizes him in the bumper role or as a sniper off the wall, Kaliyev should have plenty of chances.

The last area I wanted to touch on was Kaliyev’s defense and his commitment to a 200-foot game. We heard former Ontario Reign head coach John Wroblewski praise Kaliyev for his improvement defensively during the 2020-21 campaign.

“Hats off to him for his dedication, and even when pucks weren’t going in for him, he was frustrated with that,” Wroblewski added. “He didn’t change his game. He didn’t revert back to junior habits. He just kept pushing for the end. He has faith in the system, and the work ethic that he was putting in has been commendable.”

From a numbers perspective, Kaliyev only had two months of the 2021-22 season in which he was a negative plus/minus.

It’s a simple concept, but Kaliyev battling for pucks in his own corner shows how far he’s come. This was an area that he wasn’t necessarily willing to go in previous seasons. We saw this early in the season in Minnesota and Toronto in November and against New Jersey toward the end of the year on plays that immediately come to mind.

This play in Toronto demonstrates exactly what I’m describing.

The Maple Leafs are cycling the puck around the end boards, and Kaliyev sticks his nose in there and breaks up the play before dishing it back down low to Roy on a pass that maybe needed a little more touch on it. A work in progress nonetheless, but a positive play overall.

The fact that the score was 5-1 in favor of the visiting team conveys how engaged Kaliyev was in the play. He could have easily gone through the motions until the final horn, but the fact that he’s still fighting for loose pucks showed me how far he’s come on this side of the puck. Let’s see more of this in 2022-23 and on a more consistent basis.

To wrap this up – I think it’s fair to expect that Kaliyev will be elevated to the Kings’ third line. He could be a candidate to replace Viktor Arvidsson on the second line should he not be ready for Opening Night.

That would certainly provide him more scoring chances, especially on a line with Trevor Moore and Philip Danault, a duo that was successful in every sense of the word a year ago.

Kaliyev was a small positive on an otherwise dreadful powerplay. He figures to have a prominent role there again in 2022-23; it’s just a matter of how the coaching staff utilizes him. And as far as his defensive play, he’s come a long way in a short amount of time.

Still just 21 years of age, the future is very bright for one, Mr. Arthur Kaliyev, and I don’t think 25-30 goals is out of the realm of possibility next year.