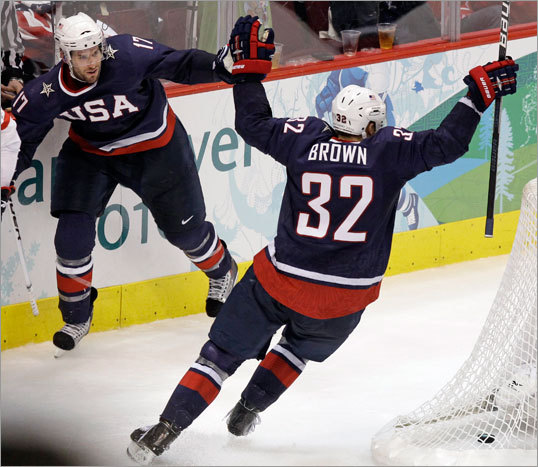 The LA Kings took a step forward in 2021-22 by making the playoffs for the first time since 2018. It seems longer than that, though. While there was a lengthy pandemic since then, four years seems longer not because of that but rather because the silver-and-black look like a force to be reckoned with for the first time in nearly a decade. They will, however, be forced to continue without their longest-tenured warrior.

This past spring, Dustin Brown had announced that the 2021-22 campaign was to be his last. The announcement all but effectively wrapped up an 18-year career – one that saw him wear the ‘C’ for eight seasons and lead the LA Kings to two Stanley Cup victories. But among the Ithaca, NY, native’s accomplishments was earning an Olympic silver medal in Vancouver in 2010.

In Olympic hockey, a silver medal is, for all intents and purposes, a consolation prize. The disappointment deepens when that team falls short of gold in overtime. That was the case for Brown and Team USA, which was unfortunate. What was fortunate, though, was learning from the club’s captain, Jamie Langenbrunner.

I recently spoke to Langenbrunner, who reflected on the Vancouver Olympics and the near-golden run that he, Brown, and Team USA enjoyed. We began, though, with the former captain’s memories of the LA Kings’ marquee No. 23 as a teammate

“You’re talking about a highly competitive, hard-nosed player,” Langenbrunner began. “That was what I was expecting in getting to know him at the Olympics. Obviously, a short stint. I think those tournaments are always a little bit odd because you’re going from combatants to teammates really quickly.”

As for pointing out his strengths, Langenbrunner did not hesitate.

“His willingness to blend into the team so quickly,” stressed the Cloquet, MN, native. “I think you saw, even at that time with his leadership ability. He was part of the leadership group and one of the captains. I loved his willingness, and a lot of guys on the team, just to blend in whatever role was needed at that moment. It is what you need because a lot of guys were coming from mostly top two lines and trying to try to fit into a four-line system. I think he showed that willingness and ability and it really helped our team gel very quickly.”

While he didn’t record any points in the tournament, Brown’s play was nonetheless invaluable to the Americans. His fearless, tough-as-nails style was a driving force, helping Team USA go undefeated in group action, finishing atop Group A. Along the way, the Americans recorded 14 goals, tying them with Canada for most in the tournament, and the largest goal differential with +9.

Beyond his performance, though, Brown was the beneficiary of playing for a captain who had two Stanley Cup victories under his belt. Langenbrunner even learned from the best, playing under a trio of Hall-of-Fame captains – Mike Modano in Dallas; Scott Stevens and Scott Niedermayer in New Jersey. The Olympics, however, are a different beast than the NHL. It is, after all, a short tournament.

But the former Devils captain was up to the challenge.

“It was [reminding the team] how quickly the tournament goes and being ready right from the start,” Langenbrunner recalled. “You know, in a normal season, you kind of build up to being ready. Although the preliminaries to a degree don’t matter as far as seeding — it’s going to be what’s going to be — getting your game in order and playing at a high level very quickly, I think is so important. Also, utilizing, bringing that mentality that there are no weak opponents.”

Langenbrunner knows this from his first Olympics: in 1998 in Nagano. Team USA, after all, entered the ’98 tournament with a bang, only to leave with a whimper.

“In ’98, the experience of Team USA coming off of winning the [1996] World Cup, it felt like it was a team that was going to medal, for sure,” he remembered. “That was probably the thought. Then, to realize how hard it actually is to do that once you get into the tournament, especially with the one-game [eliminations]. We played the Czechs in [the ’98] quarterfinal and probably outplayed them but a goalie on the other end by the name of Dominik Hasek stole it.”

As humbling as it was, the experience of Nagano was a blessing in disguise for Langenbrunner. In fact, it taught him a valuable lesson on his road to become a more versatile leader.

“Not taking anything for granted,” Langenbrunner emphasized. “That’s the one thing that I tried to send the message of. It’s going to happen quickly and be ready for anything because it’ll be gone in a flash.”

As heart-wrenching as an overtime loss in a gold-medal game is, Langenbrunner saw the big picture. He made sure to reflect on the positives as the 2010 Olympics drew to a close. This was thanks to the plethora of teammates he had who were captains themselves at one time or another.

“In the way I would have carried myself and the way I would have interacted with my teammates, it would have been taken from a number of [my former captains],” Langenbrunner explained. “I was very fortunate early in my career to play with even more guys that had been captains — [Stars teammates] Mike Keane, [Joe] Nieuwendyk was a captain in Calgary, Guy Carbonneau. I played with a ton of guys that showed and displayed leadership day-in and day-out.

“You know, I always remember when I got named captain in New Jersey, Joe Nieuwendyk telling me don’t change what you’re doing to become captain. That’s the thing that I try to do, is still be myself and be a personal leader. You’ve been given the captaincy for a reason and that’s how I tried to carry myself in the way that I hope I did with that group. [Hopefully] others would use some of that type of mentality that was given to me by all those guys through the years.”

As for Dustin Brown, the 2010 Olympics marked the only time he and Langenbrunner were teammates. The last time they squared off as opponents, however, was in the 2012 playoffs. There, it ended with Brown and the Kings sweeping Langenbrunner and the St. Louis Blues.

The former Blue remembered how he felt when that series ended.

“At that moment, we could tell that [the Kings were] destined for something pretty good,” Langenbrunner noted. “We honestly thought we were– probably went into that series believing we were, maybe, a better team than them and relatively quickly, [realized that] we were not. You just saw a team that was on a mission. They looked like they had that belief that they were gonna go on a good run.”

As for what he said to Brown in the handshake line?

“’Go finish this off’,” Langenbrunner emphasized. “Because they looked like a team that was going to do that.”

And the Kings did just that in the form of winning their first Stanley Cup. They even won against the team Langenbrunner used to captain: the New Jersey Devils.

In 2010 in Vancouver, Brown, Langenbrunner and Team USA rolled to the gold-medal game. After blanking Switzerland 2-0 in the quarters, they manhandled Finland by a 6-1 count in the semis. In the gold-medal game, a late regulation goal by Zach Parise tied the game for the Americans, giving them all the momentum. The host country, however, prevailed courtesy of Sidney Crosby’s OT winner. Nevertheless, the experience of captaining his country in Vancouver was an honor that Jamie Langenbrunner will always cherish. That goes especially for a team loaded with talent and leadership, especially with Dustin Brown on board.

As his playing career is now at its end, we continue to celebrate the legacy of Dustin Brown. That goes also for his time on the international stage. With that, Mr. Brown proved that even familiar opponents are objective and respectful enough to admit just what a strong teammate he really was.