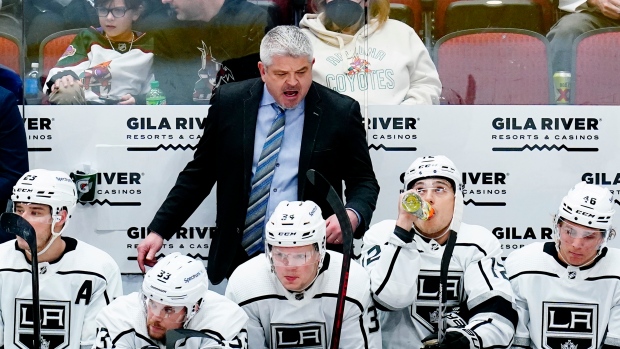 The weather outside is currently in the low 80s, so we might talk some hockey, right? The LA Kings built off a busy summer last year, adding Phillip Danault, Viktor Arvidsson, and Alex Edler, and Todd McLellan’s group put together a 99-win season.

Los Angeles made the playoffs for the first time in a few years, falling in seven games to the Edmonton Oilers in the first round. While the Kings could — and maybe should — have won the series, gaining the necessary playoff experience was critical for the younger guys on the roster.

The Kings said goodbye to Dustin Brown, who retired at the end of the year and will be immortalized on February 11 of the upcoming season, with his jersey retired and a statue unveiled outside Crypto.com Arena. Brown’s leadership will be missed, and the Kings will certainly need someone to step into that role this year.

With the roster mostly still intact, we preview the 2022-23 campaign through a myriad of questions.

What would be a good season?

As noted, the Kings are coming off a 99-win season after most of the models predicted them to finish in the 80s. Perhaps they overachieved some, but the thinking here is that the younger players who were full-timers in the NHL should take the next step in their development.

Along with the veteran core on the roster and Kevin Fiala — we’ll get to that soon — Los Angeles has a solid top-six forwards group.

It’s really up to the bottom-six guys and how much production the Kings get from there.

Quinton Byfield finished with only five goals and 10 points in 40 games. I’m curious to see what his stats would have looked like had he not broken his ankle in preseason and not been forced to spend time in the AHL before making his season debut in mid-January.

I noted it elsewhere, but a Joe Thornton-like leap — a good player comparison for Byfield — from Year 1 to Year 2 would be a success.

Arthur Kaliyev offers so much in terms of his elite shot. While the fourth line was a productive trio last year, the young forward’s minutes were limited. That said, he still scored 14 goals averaging 12:39 TOI. Let’s see him elevated into a third-line role, flanking Byfield.

Arthur Kaliyev might mess around and score 30 next season.#GoKingsGo pic.twitter.com/boYCQtRYze

Long story long, a good season means making the playoffs again, hopefully advancing beyond the first round, while the younger players like Byfield and Kaliyev produce more than they did last year. Just briefly touching on it here, but an improvement on the power-play is also a must.

What would be a bad season?

With the talent that the Kings have on this roster, combined with several Pacific Division teams losing talent from last year, it’s playoff or bust. A bad season means that Dustin Brown’s leadership is missed more than initially anticipated, the younger players fail to take the next step, and Jonathan Quick declines in his last year under contract.

On that note, Quick will turn 37 in January, and while he’s coming off a fantastic season that saw him discover the fountain of youth, we can’t expect him to continue playing at a high level.

That means Cal Petersen, whose three-year contract extension kicks in this season, needs to prove that he’s the goaltender of the future. We saw glimpses of it during the COVID-shortened 2021 schedule. However, the 27-year-old was shaky at best last year. Petersen put together a solid January, recording a .914 SV% and a 2.01 GAA before his numbers dipped in February.

So, for me, not making the playoffs and Petersen not bouncing back would be two of the more prominent storylines in what would be defined as a bad season.

I alluded to it earlier, but Kevin Fiala coming over from the Minnesota Wild was a massive win for the LA Kings. Todd McLellan’s club finished in the bottom half of the league with 2.87 goals per game and badly needed another scoring forward.

Fiala fits the bill after tallying a career-best 33 goals and 85 points. He also figures to have an impactful role on the power-play, adding five goals and 12 assists in that department last year.

“I couldn’t be happier,” Fiala said of the trade via the All The Kings Men podcast. “LA is such a great place to play, especially now with the team rising and getting better and better every year and having the young prospects. I’m very excited for the next seven years.”

Player who will most impress?

If Adrian Kempe can prove that last year wasn’t a one-off, then I certainly think the Swedish forward has 40 goals in him. Kempe finished the year with nine points over the final 10 games of the regular season and had five points in the seven-game series with Edmonton, including a three-point effort in Game 5.

He took a bit longer to realize his full potential than the Kings maybe would have liked, but the organization’s patience has paid off.

“Patience is very, very hard in the game that we play and it’s all about wins and losses. If that player is not performing or helping the team win, it’s very hard to be patient, no question about it and you have to try your best to be that be patient and Kempe is a great example,” said LA Kings Director of Player Development Glen Murray via LA Kings Insider. “He’s turned into an All Star. It’s very lucky for our whole organization, right from Rob [Blake] down to the development staff to everyone involved that we were patient with him and were very lucky to have him.”

He was rewarded with a handsome contract extension, and now it’s about building off that success.

Can Adrian Kempe be the first King to score 40 in a season since Robitaille?#GoKingsGo pic.twitter.com/95FOxqeHlU

Player with most to prove?

It has to be Cal Petersen here, right? As strong as he looked in the COVID-shortened 2021 campaign, the Notre Dame alum looked nothing like the player who finished with a .911 SV% and 2.89 GAA in 32 starts.

The Kings have almost $11 million committed to their goaltending this season. Quick’s contract comes off the books at the end of the year, but Petersen is making a hefty $5 million AAV over the next three years. If Petersen has another down year, the Kings could be in the market for a goaltender in a trade or free agency next summer.

Honorable mention: Gabe Vilardi is on a one-way contract this season. He’s running out of time, and the Kings need to figure out if he’s part of the long-term plans or time to move on.

Prospect who will carve out NHL role?

Rasmus Kupari could have every opportunity to prove that he’s ready for a full-time role at the NHL level. The 22-year-old is entering the final year of his entry-level contract and played well in a limited role last year. The Finnish forward tallied five goals and 13 points in 57 games last year, averaging 11:48 TOI.

He’s a good skater with excellent speed. An area of his game that stands out to me and can contribute to his longevity in the NHL is his physicality. Kupari logged 68 hits last year, which translates to 6.75 hits per 60 minutes, better than Dustin Brown (6.28).

Looking ahead to this year, he needs to show more offensively, taking the puck to the net to get these numbers trending in a positive direction.

In a four-game sample size at the NHL level, Fagemo didn’t look out of place and even got a look playing alongside Anze Kopitar.