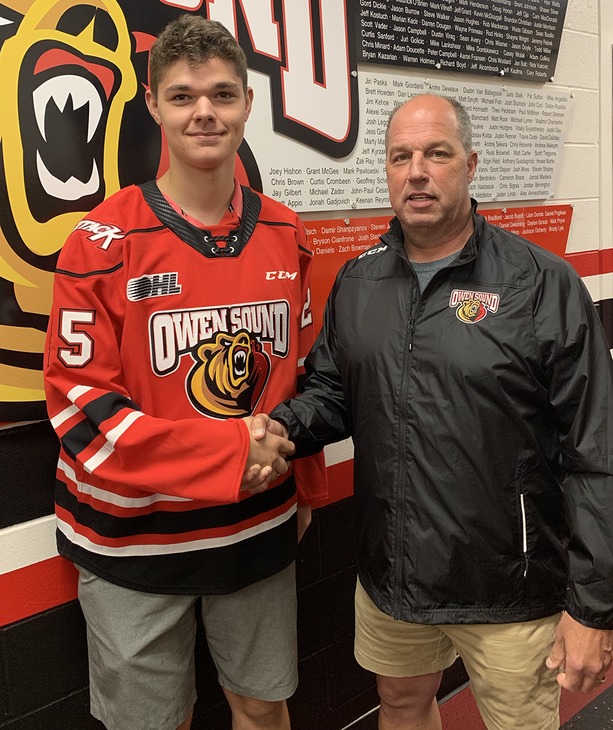 After drafting goaltender Jamie Storr in 1994, the LA Kings did not select a member of the Owen Sound Platers/Attack franchise until 2007 when they took Wayne Simmonds 61st overall. Since then, the LA Kings and Attack have had quite a few connections. In fact, at this month’s NHL Draft in Montreal, the silver-and-black drafted their fourth player from the OHL franchise since 2016, selecting big defenseman Kaleb Lawrence.

Another Attack-Kings connection is the former’s current general manager, Dale DeGray — who, by the way, took over the club’s GM duties from future LA Kings’ executive Mike Futa. As for DeGray, he played 63 games for the Kings in 1988-89 and another eight playoff games. Yet, while his time with the franchise was brief — not to mention distant — DeGray nonetheless knows just what the LA Kings are capable of. That was no exception when the silver-and-black drafted Lawrence.

I recently spoke with DeGray who expressed confidence in his young defenseman — one who looks to start fresh in 2022-23.

But Lawrence ran into some bad luck in 2021. A serious shoulder injury last fall limited him to two games last season. But it’s onward and upward for the 19-year-old, and DeGray is feeling optimistic. Yet, while his towering 6-foot-7 frame is easy to notice, that’s not all that Lawrence possesses.

“Size is probably the first thing that you notice,” DeGray admitted. “The big thing is, though, is that he’s really strong. He’s really strong from his hips to his toes. But he’s got tremendous skills and for a big man, his hands are very soft. In and around the net, he has a very, very good sense. The only thing that everybody ever talked about was big kids — and I say ‘kids’ because we drafted him when he was 15 — it’s always hard to move that big body around. As he gets older and stronger and more mature, that’s going to happen just by default, and think that’s what he’s coming into right now. It’s exciting. I’m excited for him to get that opportunity to show some people what exactly he can do.”

Having spoken to the team’s assistant coach Jordan Hill earlier this month, it was evident just how excited the Attack were for Lawrence to really show what he’s made of. DeGray didn’t hesitate to echo that elation. For the Owen Sound GM, though, his big blueliner had no trouble turning a negative into a positive. While some players were left deflated by the OHL’s nixed 2020-21 campaign due to COVID, Lawrence struck when the iron was hot.

“I think there were definitely some affected kids, but it gave Kaleb an opportunity to get to the gym to work on things,” DeGray explained. “I know when he came to camp last year, he was in great shape. He was in fantastic shape. Now, he knows how much of a time commitment that was to get to where he needed to be.”

Regardless of his limited action last season, it was not an opportunity to be deterred. Nevertheless, Lawrence will have his work cut out for him this fall.

“I don’t want to say he’s behind the eight-ball but he’s got a lot to prove,” DeGray noted. “I think he knows now what it’s going to take. Now, [he has] an opportunity with an NHL team and honestly, [he will] have [the Kings’] input and their guidance, as well, to help to help sort of mold him to be the player that I honestly think he can be. You can’t teach 6′ 7, 230 pounds. You can’t teach that. Listen, I think that was a real good, sneaky pick where the [the Kings] got him in the seventh round.”

The chances of Kaleb Lawrence making the NHL at this juncture are very slim. But that’s okay. Lawrence has his eyes on the prize in the form of making his mark in Owen Sound.

“What [Kaleb] needs to do is get on the ice and just basically– I don’t want to say start over, but I sort of want to say that because he’s played one year of junior,” DeGray said. “He’s a mature kid. He has the abilities to really put up some good numbers and get excited about playing the game. I know how much our coach loves him and is going to give him every opportunity to play.

“It’s going to be up to Kaleb to really come in, ready to go right from the get-go and take off right from the drop of the puck. And if he does, I think Kaleb, honestly, can have a ton of success. I can’t tell you that he’s going to be an NHL player or an NHL star or anything because that’s the crystal ball that we would all like to have. But I can tell you this: taking a shot where [the Kings] did, I think it’s a low-risk, high-reward sort of a deal that could pay dividends for the Kings down the road.”

Each year, it’s an exciting time when the annual NHL Draft comes and goes. Regardless of where teams are in their development stages, building for the future never loses its appeal. That is certainly no exception for the LA Kings. They have, after all, earned themselves a place at a promising juncture. Kaleb Lawrence may not fit the club’s plans right away. He will, though, be intriguing to think about. After all, the big blueliner will only continue on his path of solid development.

Dale DeGray and the Owen Sound Attack are excited. The LA Kings are also excited. And yes, you should be excited, too.