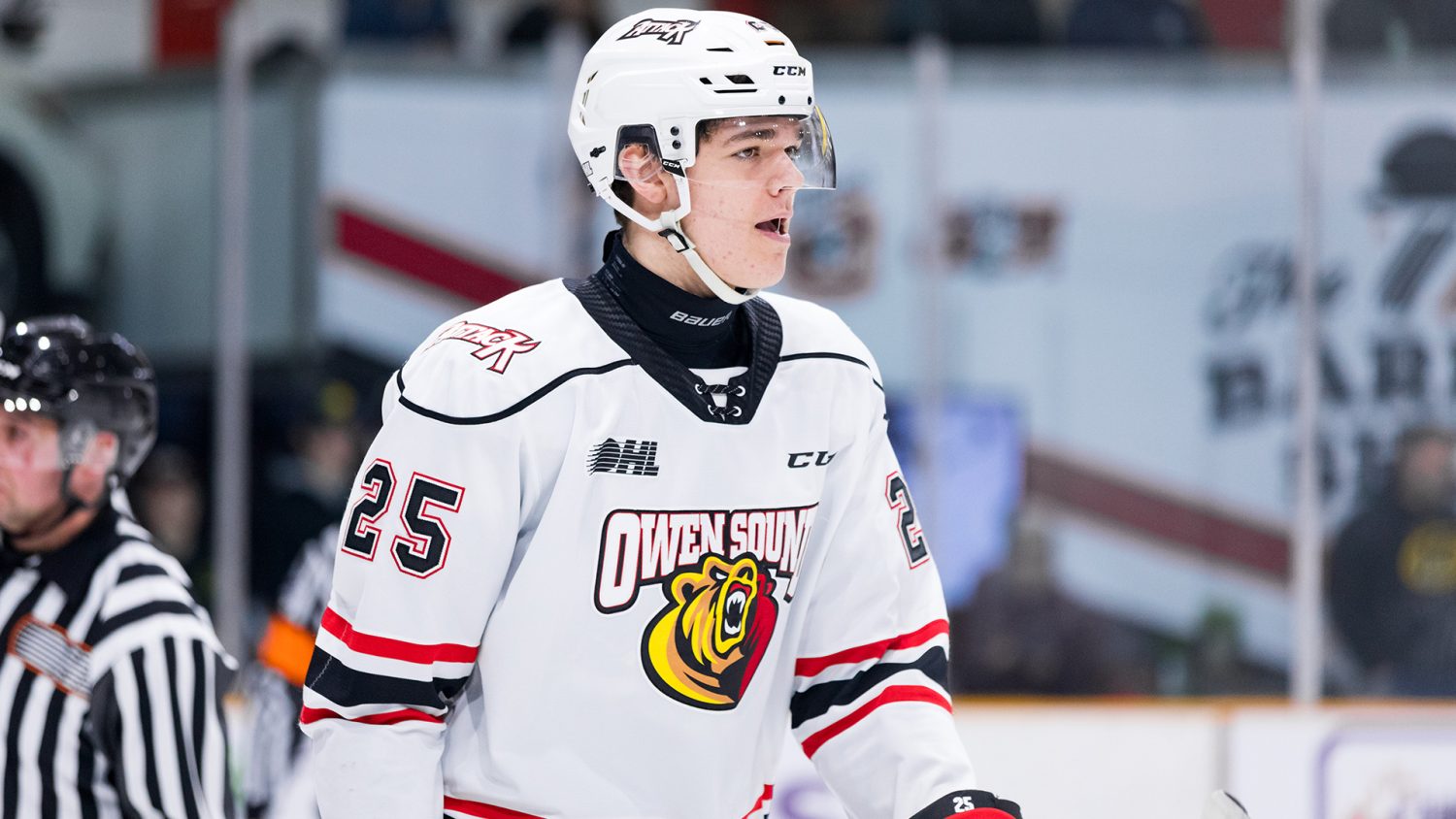 From a canceled season due to COVID to a devastating shoulder injury, Kaleb Lawrence hasn’t seen much in-game action in the past two-plus years. Since March 2020, the 19-year-old has only suited up for two games. The LA Kings, however, weren’t fazed by Lawrence’s lack of action, selecting him in the seventh round (215th overall) at the 2022 Draft.

Of course, while the LA Kings did take a chance on the youngster, skeptics tend to grimace at a seventh-rounder’s chances of making the NHL. But all they’d have to do is look at the club’s current defenseman, Matt Roy, selected in the seventh round of the 2015 draft. But for Lawrence, his focus isn’t on the NHL just yet. He’s more determined just to return to game form with his current team, the OHL’s Owen Sound Attack.

I recently spoke with longtime Attack assistant coach Jordan Hill about Lawrence’s setbacks and how the youngster prepares for the 2022-23 OHL season.

“It’s unfortunate because Kaleb only played two games for Greg Walters, our new head coach this year,” Hill said. “I had seen him before, obviously. I’ve known him well since his 16-year-old year (2019-20). I knew what he was capable of. But immediately, [Coach Walters] saw him in training camp and said, ‘This kid’s gonna be a stud.'”

“It was tough because we always felt we were missing one of our top forwards all year,” Hill admitted. “He didn’t get a chance to really prove himself with just two games played. But on the development side, I saw how Kaleb came in this year. He came in in incredible shape; he was ready to go; he improved in a lot of areas he needed to improve on.”

For many players who boast size similar to Lawrence, their physical stature is enough to make them stand out. For the Ottawa native, though, his lanky frame only scratches the surface.

“First, his strides with his frame — that’s huge,” Hill noted of Lawrence’s on-ice attributes. “It’s so important to be able to move up and down the ice. We, the coaching staff wanted to move him into the center position — I think he’s listed as a winger. So, next year, he’ll play a little bit, if not a lot, at center. We see him just being that big frame down low. He has a good understanding of the game. It allows him to kind of use his smarts a little bit to manage his speed. Maybe not stopping and starting as much as a winger would so he could use his best assets a little more frequently, which is obviously his big frame.”

That’s not all, though.

But Hill was quick to assure me that his good hands will translate to dominant success in an area that will help the Attack and hopefully the LA Kings in the coming years.

“His stickhandling,” emphasized the Attack assistant. “It’s crazy to see guys that size be able to protect pucks. It’s one of his big attributes, especially down low. Once he decides that he’s taking the puck to the net, you can’t stop him. That’s what’s exciting to see as a coach. When he decides to do something with that puck with his body and its frame protecting it, no defender is going to be able to handle him. It’s going to take two guys to stop him. And with his vision, you’ll be able to find an open guy because they try to double team him.

“He’s going to be a force in this league as long as he can keep healthy. Again, it was a freak injury, and he seems like he’s in tip-top shape. So, we expect big things for him on the net-front. On the power play, we expect him to be able to use his long reach, find those pucks in the crease, be on the goal line a lot, be nifty around the net, and get pucks when they hit the crossbar. It’s a unique asset that he has that type of framing and that type of skill set. So, I’m extremely excited for his playing the O-zone down low around the net. I think he’ll be a force once we get him over the COVID year. We have high expectations for Kaleb.”

Some OHLers still feel the after-effects of the COVID pandemic, having missed a year of action. Lawrence, however, made the best of an unpleasant situation – something Hill was very cognizant of.

“A lot of players either grew during that time or maybe faltered during that time,” Hill said. “I think he was a player that grew and understood what he needed to do for the next level, and that’s what he’s done. He just got drafted by the LA Kings, and so I definitely think that his attitude is in the right spot because of what he showed with his physique and how good he was at training camp.

Overall, Lawrence is excited for a new season with Jordan Hill. The feeling is more than mutual.

“We’re excited to get him healthy,” beamed Hill. “We call him ‘The X-Factor.’ He’s going to be a force for us next year. Obviously, he needs to stay healthy — it sounds like his shoulder is doing well — and he’ll be in a good spot next year to contribute.”

Before he suits up for Owen Sound in the fall, Kaleb Lawrence had another matter to attend to.

The Ottawa native was in Los Angeles at Kings Development Camp. This gave him a good opportunity to showcase his skills to the big club and even earn himself a confidence boost before his major-junior career resumes.