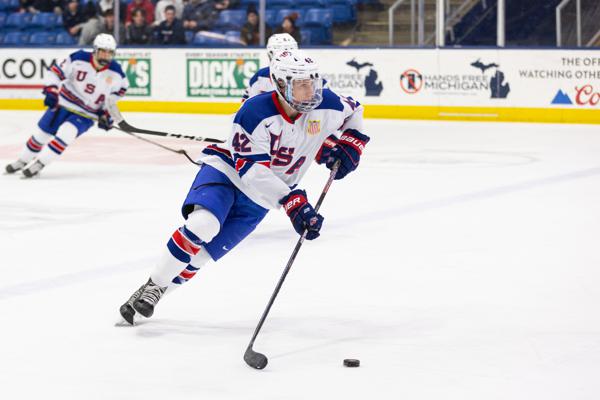 While the prospects selected from the 2022 NHL Draft just finished up their first Development Camp with the LA Kings organization, it’s never too early to look ahead to next year. Oddschecker recently released its 2023 NHL Mock Draft, and they have the Kings taking USNTDP forward Ryan Leonard with the No. 19 overall pick.

I guess a few things to dive into before taking a look at what Leonard offers.

Going into next year’s draft, the Kings have a first, a second, two thirds, a fourth, a fifth, and a sixth-round pick. Los Angeles has two third-round picks from the trade with Pittsburgh that sent Jeff Carter from the Kings to the Penguins. Carter played in at least 50 games this past season, elevating the conditional fourth-rounder to a finalized third-round selection.

The Kings were set to make their first pick in the 2022 NHL Draft from the No. 19 overall spot as well. But that was sent to Minnesota as part of the package to acquire Kevin Fiala. Another first-round selection from this spot in the order would mean another playoff berth and a first-round exit.

At any rate, these are more fun to look at, especially at this point of the offseason. A lot can happen between now and next year’s draft, but the top three targets in Connor Bedard, Matvai MIchkov, and Adam Fantilli could remain as is.

Ryan Leonard is a 2023 NHL draft-eligible prospect from Amherst, Massachusetts, home of the UMass Minutemen. However, Leonard is committed to Boston College in the fall of 2023. He is the younger brother of Nashville Predators forward, John, and spent last season with the USNTDP in Plymouth, Michigan.

Leonard found a home on a line with Isaac Howard and Logan Cooley this past season. He saw extended time with both the U17 and U18 clubs, scoring a combined 26 goals and 17 assists for 43 points in 62 games. In USHL play, he added 10 goals and five assists in 33 games.

Leonard played for Team USA at the U18 World Juniors, scoring five goals and six points in six games en route to a Silver Medal.

He will be one of the players to watch on the U18 club this season for the US National Team.

Here’s what Sports Illustrated Prospects has to say on Leonard:

Ryan Leonard possesses a deadly shot that is already far above the level of his peers. His shot boosts deadly accuracy and speed. Goaltenders don’t stand a chance when Leonard gets the shot he wants off of his stick. His lethal wrister possesses pinpoint accuracy but what is even more noticeable is his release. No matter where he is shooting the puck from, it’s hard to follow when he shoots it due to its speed. There is seemingly no area on the ice where Leonard cannot score from. Leonard can also battle hard in front of the net and is quick to find and capitalize on loose pucks to get his team on the board.