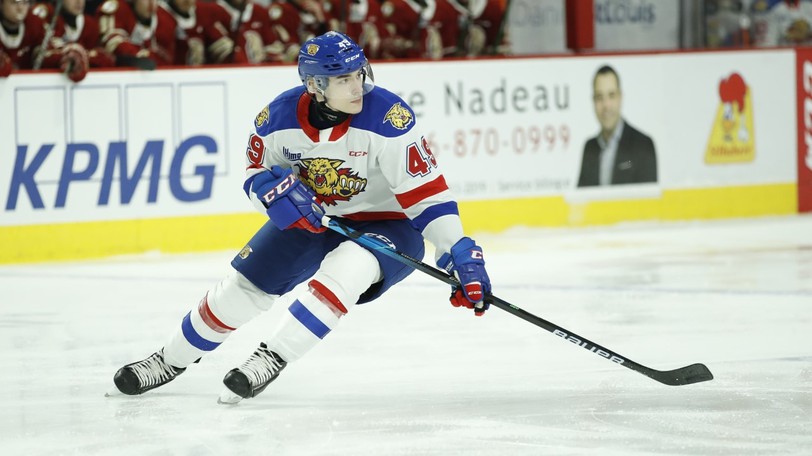 With the 2022 NHL draft this Thursday and Friday, the LA Kings have a chance to add to their already surplus of young talent. Without a first-round pick because of the trade with the Minnesota Wild that brought winger Kevin Fiala to Los Angeles, the Kings will have to wait until the second round and pick 51 to add a young player.

Plenty of good, solid players will still be available, but one stands out as maybe the perfect selection in round two. Left-winger Maxim Barbashev has played the last two seasons for the Moncton Wildcats of the QMJHL.

The 6-foot-1 and 183-pound Barbashev played in 69 games over those two seasons, totaling 21 goals and 31 assists for 52 points and 78 penalty minutes. If he is still available at pick 51 the Kings should take a serious look at him because he fits right in with their system.

Blessed with an accurate shot and NHL puck handling, he reminds me of a higher-scoring Carl Grundstrom. Quick, good skater plays a physical game, is solid in all three zones, and could be a real asset on the second line and the power play.

That release from Maxim Barbashev is giving us flashbacks to 2015….

Barbashev was named to the 2021-22 QMJHL All-Rookie team and that could just be one accolade of many to come. While he possesses a total offensive game, he is not afraid to drop the gloves either, something else the Kings could use more of.

He most likely will not be NHL-ready until the 2023-24 season at the earliest and, depending on where the Kings are in the scheme of things, could use his talents as part of the growing prospect pool that could help the Kings contend for another Stanley Cup.

If the Kings take him he could be ready for the AHL Ontario Reign as soon as the 2023-24 season, giving him a year to adapt to the pro game.

He has all the intangibles the Kings look for in a young forward and he could be right there for the taking. He has a lot of skill, contributes in other ways on the ice, and is able to use his speed to his advantage. Look for him to be a big name to watch this weekend and in the future.