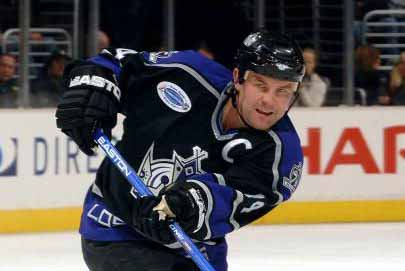 Former LA Kings captain Mattias Norstrom reflects on Dustin Brown and just how special of a leader he was.

Nearly a decade-and-a-half after his tenure with the club ended, Mattias Norstrom remains a fan favorite with the LA Kings, and for good reason.

While his tough, defensive style helped integrate his team, it was that style, coupled with his leadership, that allowed Kings fans to identify with the Swedish blueliner for 11 seasons. During five of those campaigns, Norstrom wore the ‘C’ in Los Angeles. During that time, he led by example while turning some of his teammates into future leaders themselves.

One of those future leaders was Dustin Brown.

I recently had the pleasure of speaking with Mattias Norstrom, who reflects on the type of leader that he was. He also discussed what Brown learned from him during their time together in Los Angeles.

“It’s really hard for me to answer what Brownie learned from me,” Norstrom admitted. “I hope he learned that I always tried throughout my career to prepare [off the] ice in the gym and how one works out. That was one of my biggest strengths as a player: how I came prepared. Also, I liked to lead with my personality.”

Unlike most players, though, Norstrom had the privilege of having Hall-of-Famers as his first two captains in the NHL. The 50-year-old explained how beneficial it was playing for Mark Messier (with the New York Rangers) and Rob Blake, especially when they each possessed such contrasting leadership styles.

“I came right from Mark Messier being a more vocal leader than Rob Blake,” Norstrom noted. But it was the latter who played an integral role in shaping the leader he would soon become.

“For me, Rob was the biggest inspiration and one of my absolute best friends from [the NHL],” Norstrom added. “I learned so much from him just in the sense that you don’t have to open up your mouth constantly to get the message across. He wasn’t the most vocal captain but you knew exactly when he was trying to send a message without even saying anything. Just the way he played and how he conducted himself on the ice and off the ice. For me, the best role model you could have was a player like Rob.”

When Dustin Brown joined the LA Kings in 2003, Norstrom saw a lot of Blake in the Ithaca native.

“I look back on Dustin coming into the league being pretty quiet and not taking a lot of room within the locker room,” remembered the Stockholm native. “I knew that he would lead the way he played. He was really the kind of player that let his play on the ice speak for the kind of leader that he was.”

Any new NHLer, regardless of talent level, can feel overwhelmed or out of place in their new environment. Norstrom was empathetic about this. He reflected on how he used his captain status to make the NHL transition seamless for his teammates.

“One of my biggest things is that I felt that I needed to, in a way, represent every single player towards management with maybe questions or thoughts that [they don’t] feel comfortable asking them when you come in as a young player, especially,” he explained. “When you’re breaking into the league, maybe it seems that you feel it’s not your place to be asking certain questions but you still want an answer for them. That was always a balance for me, too. I felt that I was supposed to, every time, represent every single player towards management and then kind of put [management] up against the wall a little bit within the room. That was about it.”

While he may not have heard it from him directly, Norstrom felt confident that his role benefited Brown. The former’s contributions largely help pave the way for Brown’s run as captain.

“He [was great] when the Kings were pushing for more physical play when he was younger,” Norstrom emphasized. “He came in as a real power forward and could really [master] that role. I think those kinds of players playing the game the way Dustin played were having to challenge people vocally. But you challenge them by leading by the way you play. That includes how you block shots and how you sacrifice yourself for the team on the ice. I hope Dustin saw that in the way I played the game. I, for sure, saw it in him when he became the captain. Knowing him as a player and as a person, I knew that he would be that way [and how he] conducted himself on the ice and off the ice.”

From registering over 3,000 hits to winning two Stanley Cups, Dustin Brown has never had any shortage of accomplishments. However, when thinking of what defined the 37-year-old as the quintessential leader, Norstrom thought of a less-pleasant juncture.

In the summer of 2016, Brown lost his captaincy to Anze Kopitar. But any hard feelings from the former captain were well-concealed if existent. Norstrom fondly reflected on how admirably No. 23 made the best of a less-than-ideal situation.

“II think that speaks volumes about Dustin, the person and the player,” stated the former blueliner. “When you’re named captain, you usually stay as a captain until you get traded or retire. For me, [Brown] would do whatever it takes for the team to be successful. No letter on his sweater, captain, or assistant captain, whatever it takes.

“I don’t know the background [of the situation], but [no hard feelings] were shown in how he played. He [was happy] playing for the Kings as long as the team was successful.”

“Towards the end of his career, he took a lesser role with the team,” the former defenseman said. “But for him, it was, ‘I will do whatever I can do for this team.’ I think that’s where Dustin’s career, from when I played with him to his being captain, [the Kings] kept being a winning team.”

The LA Kings have had a plethora of great captains in their 55-year history. Few, however, were more admired than Mattias Norstrom and Dustin Brown.

In his 11 seasons with the LA Kings, Norstrom helped transform the Kings from proverbial basement dwellers into playoff contenders. But while the present was certainly crucial in itself, the 14-year NHL veteran focused on the future, as well. Looking forward, Norstrom helped hone an abundance of teammates as leaders. That goes especially for Brown who took the ball and ran with it, so to speak. All the latter did was go on to become the longest-serving captain in Kings’ history.

Looking back on Dustin Brown’s career, we see who was there to help the former Guelph Storm succeed. In Los Angeles, Brown became a bona fide leader on and off the ice. You can bet that Mattias Norstrom was an integral part of that transformation, highlighting a relationship that will make Kings fans everywhere smile from ear to ear.