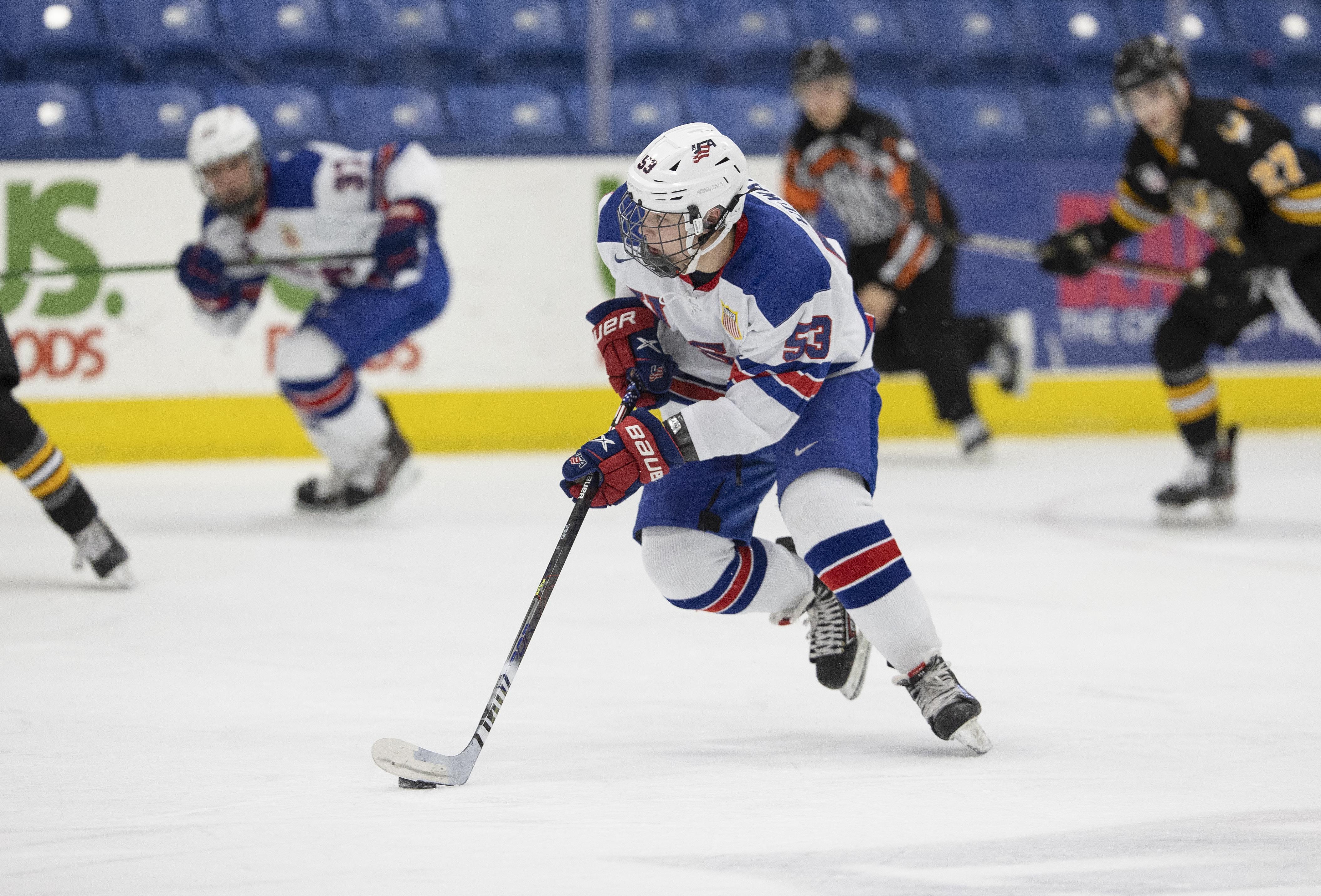 Isaac Howard is one of the top offensive prospects in the 2022 NHL draft. The Hudson, WI native is committed to playing collegiate hockey at the University of Minnesota-Duluth, and he’s expected to join the Bulldogs in the fall.

He was drafted 87th overall by the Owen Sound Attack in the 2020 OHL Draft. Should his plans change from heading to Duluth, Howard would report to the OHL.

He spent the last two seasons at the USNTDP, where he racked up a healthy 33 goals and 82 points in 60 games for the U18 team. In USHL play, he added 11 goals and 37 points in 27 games. In Plymouth, MI, he spent the bulk of his time playing alongside fellow top prospect Logan Cooley.

🚨GOAL!
What a pass from Isaac Howard to Logan Cooley to put us within one! 3-2 with ten minutes left #USAvsCHI pic.twitter.com/ACSli8MnW0

Howard had a terrific showing at the U18 World Championships, scoring six goals and five assists in a six-game sample size.

What a play from Isaac Howard. Takes the puck from his own zone, does all this and zips it in. His fifth goal of the tournament. #U18Worlds

While early reports have showcased his ability to score goals, Howard has developed his all-around game to become a more complete player. He has an uncanny ability to find teammates in high-danger areas and delivers quick and precise passes that find them more often than not. Combined with the USDP and USHL this season, Howard has amassed 45 assists in 57 games, highlighting how versatile and threatening he can be when the puck is on his stick.

The defensive side of his game is nothing to scoff at either. Positionally, Howard often positions himself to take away the passing lane while also leaving himself open for a breakout attempt. He’s active with his stick and can identify and read plays with quick and decisive thinking. Howard tends to look for players higher up the defensive zone when attempting to start a rush play, and his transition in the neutral zone leads him to look for open areas to receive a pass upon entry into the offensive zone. – Shawn Wilken/The Hockey Writers

Isaac Howard, the sixth National Team Development Program player on this list, did have a fairly significant slide in this edition of the ranking — from top-10 consideration down closer to the 20s. He’s a highly-competitive forward that plays a very aggressive game in his pursuit of the puck. He has one of the better shots in the class, thanks to a lightning-quick release. He’s not the fastest skater and his defensive game stands to show improvement, but his offensive game will be more than enough for an NHL team to bite. – Josh Bell/Sporting News

Howard has the upside to be a first-line winger in the future. However, if he doesn’t learn to reel in his aggressive offensive style, he’ll likely struggle to translate to the NHL level, if he’s even given the chance. That said, he may never see the NHL if things don’t work his way. That’s where the boom-or-bust nature of Howard arises. Despite that, the upside is tantalizing, and an NHL general manager should be happy to land a player like Howard. They just need to have the right plan to make sure Howard gets a solid opportunity. – Kyle Pereira/Last Word On Sports

“When he’s in attack mode taking pucks from a standstill into the middle of the ice to create looks, he’s a ton of fun to watch and forces opposing players to reach in on him (which draws a lot of penalties). He’s creative.” – Scott Wheeler, The Athletic

“Routinely, Howard keeps an excellent eye on the puck and aligns his positioning to where the puck is. In addition, he has the speed with his crossovers to keep quality pace with his puck-carrying attackers. His vision and speed complement each other nicely as he is always on the move, attentive and puts himself in a position where he can be impactful.” – JoshTessler, Smaht Scouting

“Howard has a natural instinct for scoring, moving to soft areas on the weak side of the offensive zone without the puck and finding ways to gain to the middle lane off the rush. He’s a deceptive shooter, changing the angle on goalies before ripping pucks home. He’s committed to the University of Minnesota-Duluth but will likely play another year with the NTDP before he ships off.” – Joey Padmanabhan, EP Rinkside