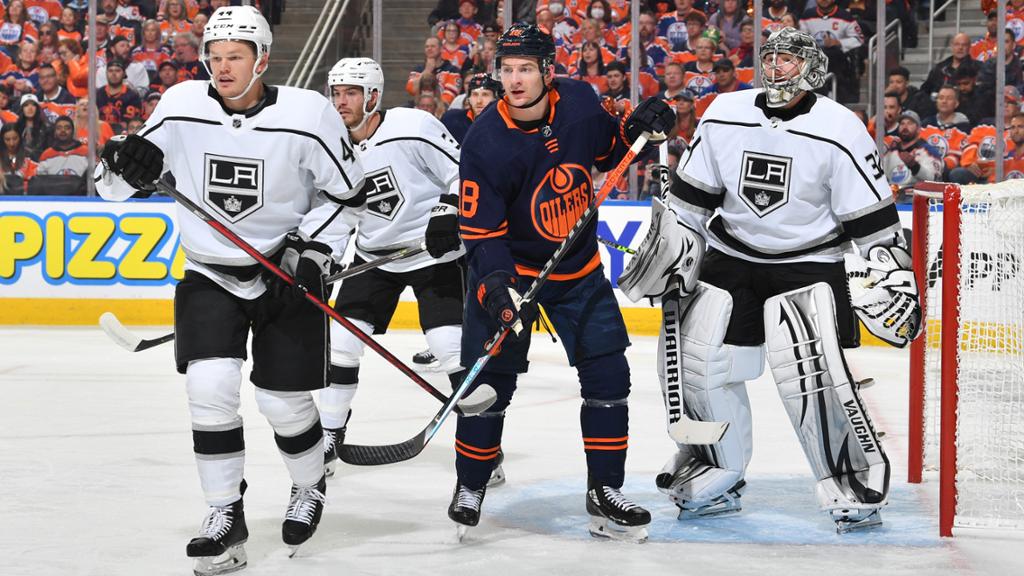 The LA Kings suited up for their first playoff game since 2018 on Monday, kicking off a series in which everyone counted them out before it even started. They shut up all of their critics with a 4-3 win to take the series lead over the Edmonton Oilers.

Right off of the bat, we got crazy offensive chances on both sides of the ice, setting the tone for what would be the best game of the night around the NHL. Halfway through the first period, Alex Iafallo fed Trevor Moore in front of the net to open the scoring and put the Kings up, 1-0.

Minutes after, we saw Moore return the favour, setting Iafallo up for a goal of his own, as the Kings took a 2-0 lead.

However, late in the first period, Connor McDavid did Connor McDavid things, going end to end, dancing around Olli Maatta and firing it in on Jonathan Quick to get the Oilers within one goal.

In the second period, the refs gave the Oilers a power play despite it not even being a penalty, and Edmonton took advantage, scoring and tying the game up.

Immediately after, Brendan Lemieux received a nice feed from Adrian Kempe and sniped it in on Mike Smith to put the Kings back up and net his first career playoff goal.

Leon Draisaitl, again on the power play, buried a goal when left all alone and tied the game up once more.

In the third period, there were high-quality chances on both ends, but Phillip Danault scored with just over five minutes remaining off of a nice shot from Sean Durzi, and the Kings regained the lead once more, this time not giving it back up.

1. Iafallo does well in replacement of Arvidsson

Although it was reported that Viktor Arvidsson had a good chance of playing in Game 1, that didn’t end up happening, which led to Alex Iafallo being elevated to the second-line with Moore and Danault, and it could not have gone better.

Iafallo scored one goal, two points, was a plus-three, had five shots on goal, two hits, one blocked shot, and was a 68.43 expected goals percentage (xG%) through 17:47 of ice-time.

It’ll be interesting to see what the Kings do when Arvidsson is ready to return, considering Iafallo’s play on that line.

As I said, most people had the LA Kings pegged as a sweep or five-game series for the Oilers, with not many people placing their faith in the Cali’ boys, but they showed on Monday, if they go down, it won’t be easy.

“We just kind of focus on what we’re doing and we believe in our group. We believe in our leadership, our coaching and everything that we do,” Moore said when asked about the outside noise heading into the series.

That’s been the Kings’ mentality all season long, brotherhood and playing for the guy next to you, and it paid off in Game 1.

Jonathan Quick seemingly turned the clock back to 2012, saving 36 of 39 shots, good for a .923 save percentage and 1.30 GSAx, just pure insanity watching him.

He certainly gave Kings fans a scare a couple of times with the diving efforts he was making, but they mostly ended up paying off, with him making numerous massive saves throughout the game.

“We got excellent goaltending, as we expected, and we’re opportunistic,” Kings head coach Todd McLellan said. “If anybody’s been watching us for the last 3-4 months, as some of you have, that’s how we play. We played in our skin, we played to our identity and we were just a carbon copy of how we’ve done it.”

If the LA Kings want to win this series, they’re going to need Quick to come up big, and so far, he has.

Game 2 between these two teams is on Wednesday, with puck drop set for 7 pm PT.