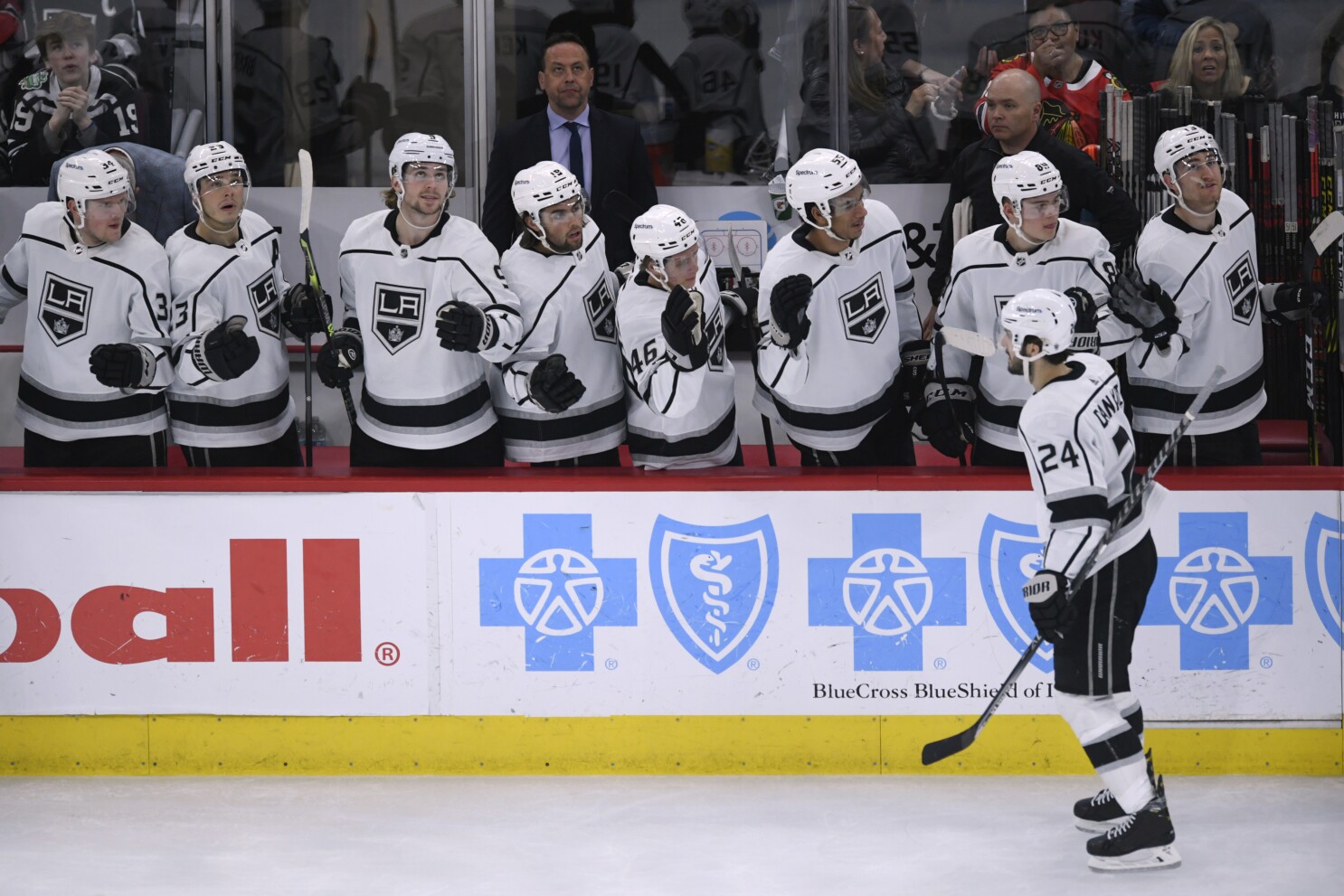 In their most important game of the season, the LA Kings came into the Windy City and took control of the game, taking the Chicago Blackhawks down, 5-2.

The Kings improved to 39-26-10 on the season, sitting two points behind the Edmonton Oilers, and three points ahead of the Vegas Golden Knights.

The scoring opened with the second line dominating play, per usual. Trevor Moore outworked Jake McCabe behind the net for the puck and got it to Viktor Arvidsson, who passed to Phillip Danault, who then found Moore wide open for the tap-in goal.

Just a few minutes later, Phillip Danault took a shot from the outside on a delayed penalty, and it bounced off of Caleb Jones and found its way in on Collin Delia.

In the second period, Taylor Raddysh found some separation and was able to put it in to get the Blackhawks on the board. However, just half a minute later, Blake Lizotte ended up dancing Delia off of a strong play from Dustin Brown and regained the two-goal cushion for the Kings.

In the third period, Jordan Spence fired one from the point and put the Kings up by three goals, essentially putting it away.

The Blackhawks found themselves getting a late-period goal, but the Kings shut down their comeback attempt rather quickly, with an empty-net goal.

“I think you look at the standings and that’s kind of a must-win game for us,” Lizotte told media in the post-game, acknowledging the tight spot the Kings are currently in.

“In my mind, there’s no such thing as a perfect game, but we eliminated a lot of errors that we were making in games prior,” head coach Todd McLellan said following the win.

1. Dustin Brown with a great first game back

Dustin Brown missed exactly one month due to injury, and while he has had evident struggles this season, last night was not one of them at all.

Brown had two assists, both primary, five shots on goal, and 0.49 expected goals for through 12:37.

“First of all, he had a tremendous game. To come in and be injured as long as he was, practice as little as we’ve practiced, […] to come in and give us the type of game he had was huge,” McLellan said on Brown’s return.

If the Kings can get this Brown going forward, it would be massive for their push to the playoffs.

As mentioned, Blake Lizotte found the back of the net twice last night, which marked the first time he has ever done that at the NHL level in his 170-game career.

Not too shabby for somebody that Kings fans were dubbing an “offensive black hole” at the beginning of the season.

3. Back at it on Wednesday vs Colorado

The Kings don’t have much time to rest, as they’re back at it tonight in Denver against the Colorado Avalanche.

It’s their second-last back-to-back of the season, with their last coming on April 27-28 in Seattle and Vancouver.

The Avalanche are obviously not an easy opponent, and it makes it even harder considering it’s the back-end of a back-to-back on the road, but it’s an interesting test for the Kings to see if they’ll bend or break.

Brock Faber returning to the University of Minnesota