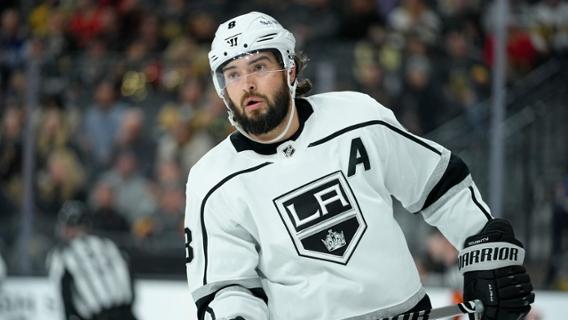 The LA Kings will be without one of their leaders for the remainder of the season. Defenseman Drew Doughty underwent wrist surgery on Monday, the team announced.

Doughty will begin his rehabilitation process immediately and is expected to be fully recovered for next season.

Doughty, 32, has not played since March 7 and has been limited to 39 games this season. The former Norris Trophy winner injured his knee during the first month of the season when the Kings played the Stars in Dallas.

That said, Doughty was on track toward a solid season, having tallied seven goals and 24 assists for 31 points.

The Kings have had to scramble as Doughty was part of a rash of injuries the team sustained around the same timeframe, including his defensive pairing partner in Mikey Anderson. Sean Durzi has taken on an expanded role, playing in bigger minutes while manning the first power-play unit. Jordan Spence also made his debut perhaps a year sooner than expected.

General manager Rob Blake wouldn’t comment one way or the other regarding Doughty’s status a couple of weeks ago, potentially leaving hope that we would return at the end of the regular season or the start of the playoffs. Now, the Kings will have to go the distance without No. 8.

The Kings play in Chicago on Wednesday against a Blackhawks team that has lost seven straight games. LA has lost their last three, clinging on to third place in the Pacific Division with Vegas just two points back.