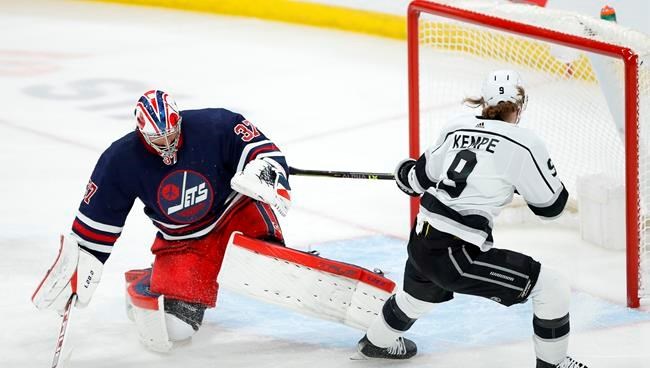 As the season dies down to the final dozen games, the LA Kings made their way to Winnipeg to complete their Western Canadian road trip. They managed to down the Jets in a close battle, 3-2, and improve to a 38-23-10 record.

The Kings earned five of a possible six points on their Western Canadian road trip, and sit three points ahead of the Oilers, who have two games in hand on Los Angeles.

The scoring opened relatively quickly, as Adrian Kempe and Phillip Danault found themselves on a two-on-two while shorthanded and capitalized to get on the board.

A couple of minutes later, however, Viktor Arvidsson failed to get the puck in deep and had an offensive-zone turnover, Mark Scheifele sprung Nikolaj Ehlers, who sped past Sean Durzi and fired it under the pad of Cal Petersen.

Anze Kopitar found a bouncing puck around the slot and buried it on Connor Hellebuyck, who was in the midst of falling down.

🚨 Kopi finds the back of the net 🚨#GoKingsGo | @LAKings pic.twitter.com/zS4UH67tj9

In the second period, Jordan Spence fired one from the point and it was tipped it by Gabriel Vilardi to put the LA Kings up by two goals.

🚨 Lil help but Spence will take it 🚨#GoKingsGo | @LAKings pic.twitter.com/9cFd7aFMAK

Later in the period, Petersen allowed a rough rebound, and Adam Lowry managed to put it away to put the Jets back within one goal.

No goals were scored in the third period, as the Kings held on and take the two points in regulation.

Petersen and Kempe were given the first and second-star honours, while the Jets’ Ehlers was given the third star.

1. Cal Petersen with another great game

Cal Petersen proved to be a crucial piece for the Kings again last night, as he made countless big saves to keep the team in it throughout the night, especially when they slacked off in the second period.

Petersen saved 25-of-27 shots, good for a .926 save percentage and 1.57 goals saved above expected (GSAx). He has recorded a .920+ save percentage in three of his last four games played.

“Cal [Petersen] was standing on his head. He was the real MVP of this game,” Adrian Kempe said on his goaltender following the game.

With the way these last two games have gone, I’d expect Petersen to get the nod in DTLA when the Kings host the Flames on Monday.

The Kings have been riding an underdog mentality all season long. They win games by outworking their opponents and tuning out the noise, and last night was another example of that.

“There’s statistical hockey and then there’s winning hockey. What’s nice about most of our guys is that they want to play winning hockey, they don’t give a ‘you know what’ about their stats, they just want to win. It’s in our DNA, we do a good job of it,” head coach Todd McLellan said in the postgame.

That mindset is what wins you playoff games, and even the Stanley Cup.

Sean Durzi was a driving force on the offensive side of things last night, heavy on the forecheck, and even helped Anze Kopitar on his goal.

“He’s got a lot of skill obviously, and he’s shown it. Very poised with the puck,” Kopitar said during the intermission when asked how Durzi’s game has been.

Durzi has faced criticism for his defensive woes, and while that is valid, it’s important to point out that his offensive side is extremely valuable to the team. If he can be paired with a stay-at-home defenseman, he’d elevate his game to the next level.

The Kings’ special teams have not been, well, special this season, but they played a significant factor in Saturday’s win. Gabe Vilardi’s tally came on a power-play, and while the Kings took a lot of silly penalties, they killed off all six minor penalties.

A huge testament for a team that came into this one 24th in the league with a 75.5% PK clip.

The LA Kings are back at it on Monday, hosting the Calgary Flames. With a regulation win, Todd McLellan’s group can pull within one point of first place.