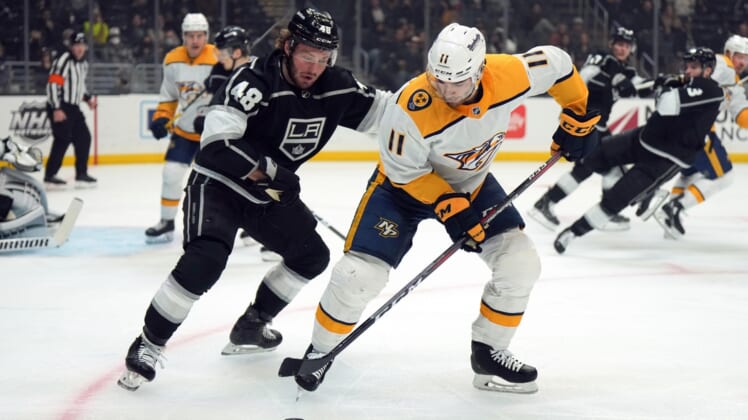 The LA Kings look to get back on track against another team currently occupying a playoff spot in the Nashville Predators.

The Kings enter this game as ever-so-slight favorites via our sponsors at DraftKings.

Really, the only difference from Saturday is inserting Stecher into the lineup and Jonathan Quick in net. Stecher and Edler were long-time partners in Vancouver, so it makes sense to try to re-connect those two with the hope that they find their chemistry.

“Obviously super excited to be here,” Stecher said on Monday via LA Kings Insider. “Looking at where we’re at in the standings and the playoff race out west, I’m excited to join this team. Everybody’s super friendly and welcoming, they’ve made me feel at home ever since I’ve got here. I don’t know too much about the organization, I’m familiar with some players and past players, so I’ll reach out tonight to some of those guys and get in quick.”

The Kings badly need to find some offense after scoring one or fewer goals in three of their last five games. That also includes two shutouts. General manager Rob Blake indicated that Viktor Arvidsson is likely due back at the end of the week – along with Tobias Bjornfot – so the Kings need others to step up in their absence.

I’m talking about Alex Iafallo and Adrian Kempe from the top line, and I’d like to see the third line start producing. The combination of Vilardi – Byfield – Kupari has visually looked great on the ice, but the results just aren’t there. It’s a formidable opponent to find the scoresheet, but hopefully, those three can elevate their game.

Honestly, it’s challenging to predict Nashville’s lineup coming out of the trade deadline.

Here’s were the starters for Monday’s game against Anaheim:

On Monday, the Preds were without Matt Benning, Mattias Ekholm, Ben Harpur, and Matt Luff. It’ll be interesting to see if any of their statuses change for tonight. And with Saros getting the nod against the Ducks, I’d expect David Rittich to get the start in LA. He’s gone 5-2-1 in eight starts with a .894 SV% and 3.04 GAA this year.

Nashville also acquired Jeremy Lauzon from Seattle, who is fifth in hits among defensemen.

The Kings and Preds get underway at 7:30 pm PT.