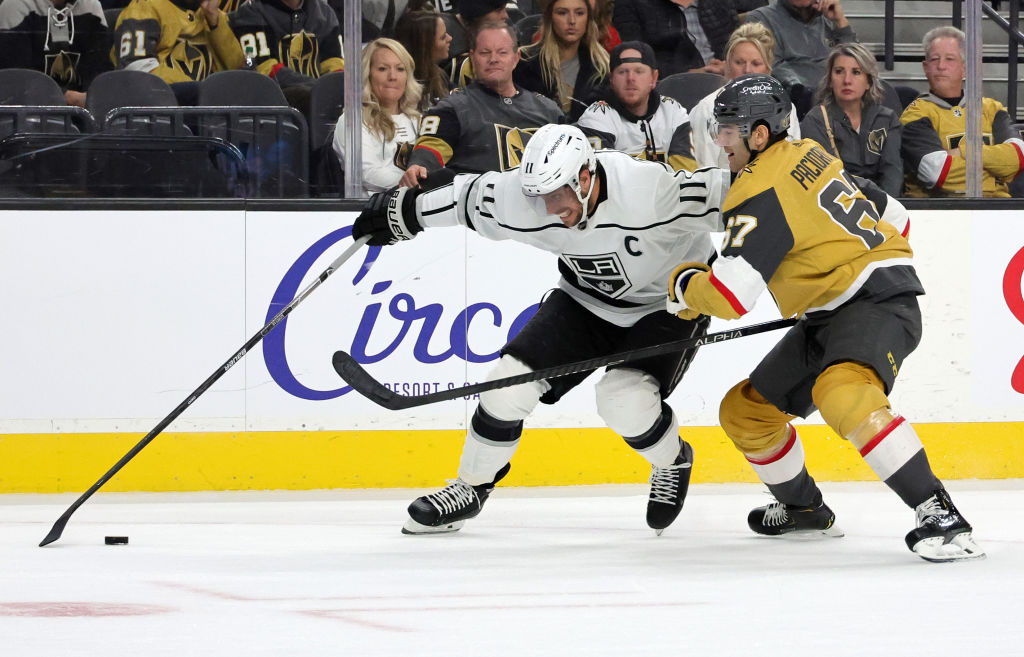 The LA Kings lost a disappointing game in Vegas on Saturday, falling 5-1. A few takeaways from the contest.

The Kings were generous enough to spot Vegas a 2-0 lead before Phillip Danault tallied his 19th goal of the season in the second period. With 8:30 left in the middle frame, Trevor Moore found the former Montreal Canadien in front of the net, and Danault backhanded a shot past Logan Thompson.

🚨Danault gets the LA Kings on the board!!!🚨#GoKingsGo | @LAKings pic.twitter.com/9Llz3twmc6

Moore and Danault have been the two constants for the LA Kings this season. The narrative surrounding the latter when he signed with Los Angeles during the offseason was that he was an elite defense forward who couldn’t score.

The Kings’ second line has been one of the best in the National Hockey League, with Danault and Moore having career years.

“Me and Moorsey talk all the time about how we want to step up for the team, that’s for sure,” Danault said after the game via LA Kings Insider. “I think everyone wants to step up and obviously we lost today, but we get back at it next game.

2. Lost patience with this PP

I’m not really sure what to say about this power-play anymore. They looked largely improved on the first two opportunities, holding the offensive zone for the entire two minutes on the second power-play.

However, the third man-advantage saw Mattias Janmark race the other way for his second breakaway of the game. Unfortunately, Cal Petersen was unable to stop this one, with a trailing Sean Durzi giving his best effort to chase down the Vegas forward.

At this point of the game, the Kings had all the momentum, looking to even the score. However, Janmark’s shorty opened up the floodgates as Vegas would go on to score two more, including one from former LA King Michael Amadio.

It marked the ninth shorthanded goal allowed this season for the Kings, now the worst in the NHL. Regardless of whether the team makes the postseason, there need to be swift changes in this department.

Can we start declining penalties?

Los Angeles needs to get start getting bodies back into the lineup. The injuries are starting to show, with the Kings scoring one or fewer goals in three of the last five games, including being shutout twice.

After two goals from the first line on Thursday, the trio was relatively quiet on Saturday. Alex Iafallo is now pointless over his last seven games.

General manager Rob Blake has a difficult decision in front of him: to make a move or not? The NHL trade deadline is on Monday, and while a move isn’t necessary, a quick look at the standings shows the stark reality. Yes, the Kings still hold second place in the Pacific Division, but the Oilers won on Saturday, bringing them within two points of Los Angeles with two games in hand.

Vegas is also just four points behind LA, with 18 games to go.

The LA Kings are off until Tuesday when they host the Nashville Predators at Crypto.com Arena. Will the Kings be buyers at the deadline?