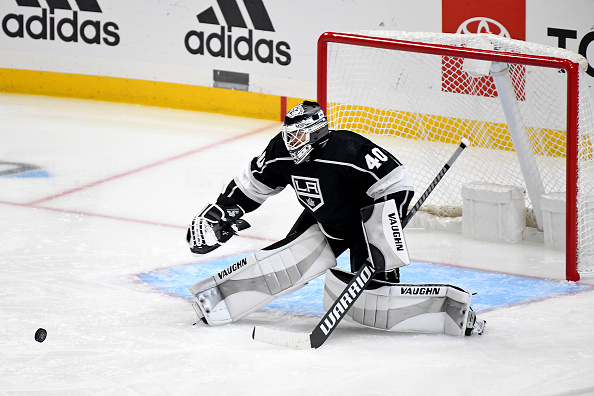 No way, (San) Jose. On a night when Jonathan Quick was honored for 700 games played, it was Cal Petersen who collected his third shutout of the year in the LA Kings‘ 3-0 win over the San Jose Sharks.

After missing three months with a fractured ankle, the 35-year-old made his long-awaited return to the lineup. While he didn’t record any points in the win, Edler played 13:42 TOI, registering two shots on net with a +1 rating.

“It felt like I haven’t played in three months, but it was great being out there with the boys,” Edler said after the first period on how it felt being back.

To be perfectly honest, I didn’t really even notice Edler that much on the ice, which is always a good thing if you’re a defenseman. All-in-all, it was great to see him come back from that injury and play a sound, structured game in his return. He has such a calming presence back there on the blueline that seems to rub off on everyone else.

2. Kopitar and Kempe gets off the schneid

The lack of production from the LA Kings’ first line has been well-documented over the last several games. However, two of three members ended their droughts on Thursday.

Anze Kopitar opened the scoring for Los Angeles in the second period with a terrific snipe from above the right circle. Shoutout to Phillip Danault for doing just enough to screen Sharks’ netminder James Reimer right as Kopitar fired the shot on net.

“It’s always in your head and I don’t think I’ve gone through a struggle like this before, ever,” Kopitar admitted after the game. “It’s nice to get off the schneid and more importantly, it’s nice to win a game and move on.”

Not only was it his 16th goal of the season, but it was Kopitar’s first goal since February 25.

Adrian Kempe‘s inconsistencies have kind of reappeared in the second half of the season after a really impressive first half. The impending UFA had gone 10 games without recording a point, but he ended that drought with an empty-net goal to give the Kings a 3-0 lead late in the third period.

The Swedish forward is now up to 26 goals on the season.

Yes, it was an empty-net goal, but at the end of the season, those don’t really matter. And if you think about the Sharks hitting the post off a re-direct early in the game to go along with Durzi’s two big saves, San Jose could have very well found themselves on the winning side. So Kempe’s empty-netter proved to be an important goal.

Just five days ago, Cal Petersen gave up five goals to this San Jose team at the SAP Center, and the Kings were embarrassed badly in a 5-0 shutout. On Thursday, he returned the favor, stopping all 29 shots faced, including two critical saves on two shorthanded breakaways from Tomas Hertl.

Ideally, you’d prefer that the Kings don’t give up these shorthanded scoring chances for the opposition. I feel like we’ve seen it far too much this season, something that certainly needs improvements going forward.

Petersen also had some help from Sean Durzi, who batted the puck out of mid-air in what surely looked like a puck destined to land behind Petersen. The Kings’ netminder had lost track of the puck, but thankfully, his defenseman had his back.

“Oh yeah, sick play,” Petersen reacted to seeing the replay after the game. “He’s a great defenseman. I’m happy for him. Shoutout to our team.”

The 27-year-old earned his third shutout of the season and has won three of his last four starts.

The LA Kings are back at it on Saturday against Jack Eichel and the Vegas Golden Knights. Eichel’s health could be in question after blocking a shot with his hand. Vegas’ list of injuries continues to grow by the day.