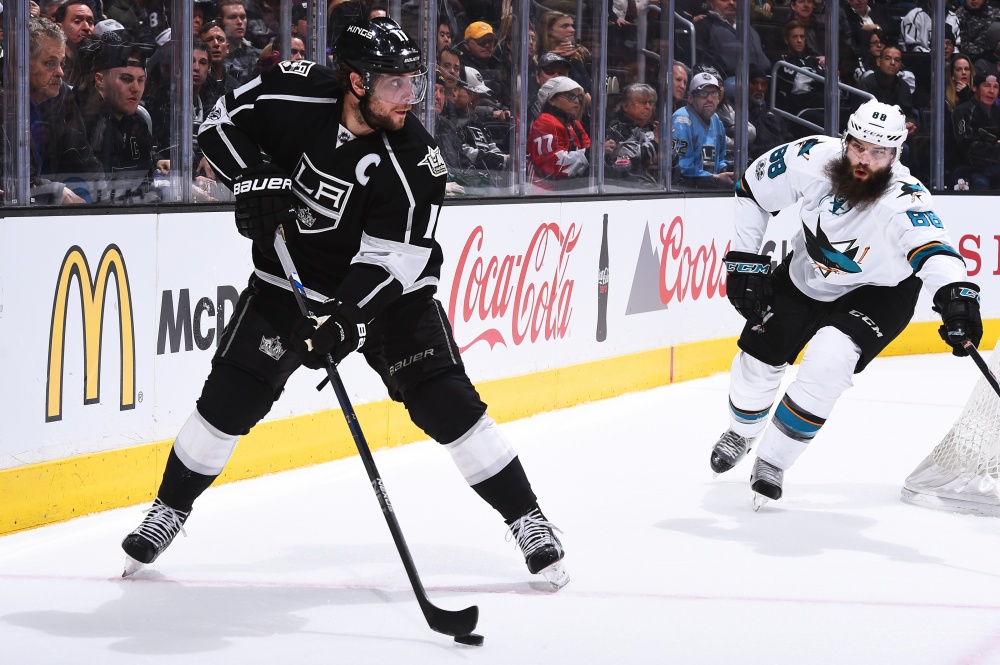 Anze Kopitar snapped a six-game pointless streak, helping the LA Kings win another game as they move closer to a playoff spot.

While it was all smiles in advance of Thursday’s game against the San Jose Shark as Jonathan Quick was honored with 700 games played, the LA Kings had a critical challenge in front of them. The Kings were looking to avoid being swept in all four games against their division rivals while dealing with a rash of injuries.

Coming into Thursday, the Kings had seen Brendan Lemieux, Viktor Arvidsson, Andreas Athanasiou, and Dustin Brown on offense, and Mikey Anderson, Drew Doughty, Matt Roy, and Tobias Bjornfot on defense all sidelined with injuries within the last two weeks.

Added, the Kings’ top line had not been producing the way we have been accustomed to. Anze Kopitar was riding a six-game pointless streak for the first time in his 16-year NHL career. Adrian Kempe was without a point in ten straight games. Alex Iafallo is still without a point since early March, with his last goal coming at the end of January.

On Thursday, both Kopitar and Kempe tallied goals in the Kings’ 3-0 win over the Sharks. The Kings’ captain tallied a much-needed power-play goal in the second period, and Kempe added an empty-net insurance goal to put the finishing touches on the game.

“Yeah, it’s always in your head and I don’t think I’ve gone through a struggle like this before, ever,” Kopitar admitted. “It’s nice to get off the schneid and more importantly, it’s nice to win a game and move on.”

Head coach Todd McLellan noted earlier this week that he wasn’t opposed to splitting up the top line in an effort to get them going again. But hopefully, Thursday’s effort can get that line back on track.

“They looked the way they should tonight,” McLellan said of his top line. “We tried to get them as much rest as we could the last couple of days, we may continue that tomorrow with those three, but their checking skills, first of all, let’s start on that side of the puck. They didn’t give up nearly as much as they have in some games earlier and then pretty determined shooting the puck. Juice hit the post, Kopi had chances on the power play, they scored a power-play goal. Good night for that line.”

Despite being banged up, the Kings have managed to stay afloat in the playoff race, sitting in second place in the Pacific Division. LA has undoubtedly had some help due to the lackluster play of Vegas and Edmonton, but the Kings surged in the standings going 19-9-3 since January 1.

“The position that we’re in right now, maybe the majority of outside people didn’t think that we could make it this high,” Kopitar said. “I think that the belief within our room and within the group has always been at a high level and we’ve shown it on the ice. It’s not just in the room, we’re showing it on the ice. I think the team is much improved from previous years and the play on the ice speaks for itself.”

With 19 games left in the regular season, the Kings are in a good spot. More importantly, they’re also starting to get healthy. Alex Edler made his return to the lineup on Thursday after missing three months. Drew Doughty and Viktor Arvidsson are both skating again and look to rejoin the team here in the near future.

Looking ahead in the schedule, while Monday’s trade deadline is at the forefront of all the NHL clubs, the Kings have to take care of business down the homestretch with one game against Vegas, two games against Edmonton, and two games against Calgary remaining littered in with several teams figuratively out of playoff contention.

“I mean, whoever is saying they’re not checking the out-of-town scores is probably lying,” Kopitar said of whether he and the team discuss the postseason. “We know what kind of position we’re in and obviously, we know what we’ve got to do. Whether we talk about it or not, it’s there, the bigger picture is there and it’s showing. We have 19, 20 games left, it’s very doable, but we’re going to have to make it happen.”

Kopitar and the Kings are looking to make the postseason for the first since the 2017-18 season.